Our next entry in the Trucker’s Logbook finds us returning to Euro Truck Simulator 2 (ETS2) and departing Russia.  We’ve been driving around Russia exploring the RusMap which I’ve very much enjoyed.  I recently wrote about my first impressions of this ETS2 mod add-on.  While I would have loved to spend more time in Russia and explore more of the RusMap add-on, I’ve been unable to pickup any new jobs which would keep me here.  As you can see from the image below, I still have a lot of roads to drive in the RusMap region.  But I know they’ll be waiting for me another day. 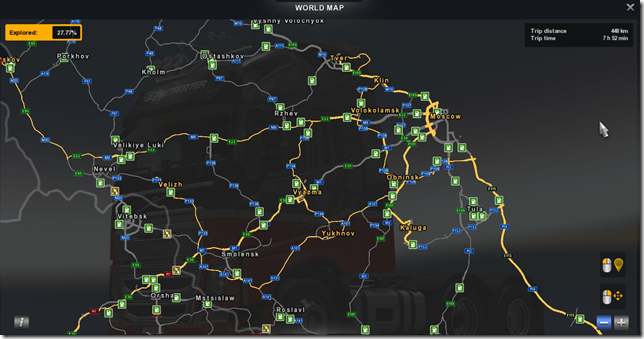 The job we’ve chosen is to transport pressure tanks from Pskov, Russia to Lahti, Finland.  Our route will take us through Estonia and we’ll travel across the channel between Tallinn to Helsinki.  Our overall route distance is 497km with an estimated trip time of just under 9 hours.  We are fully rested and should not need to rest during the drive. 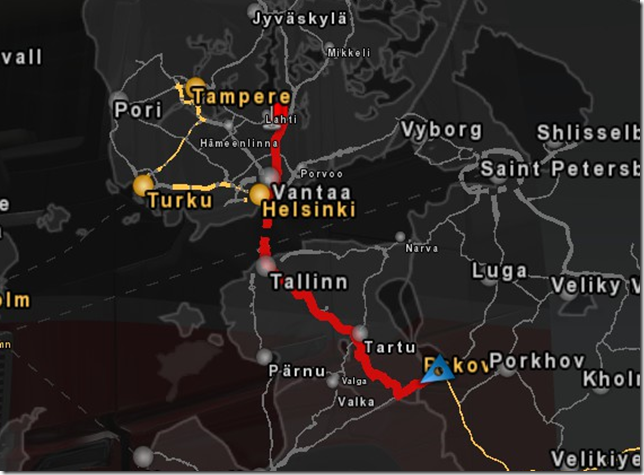 We arrived to pickup the trailer and the two pressure tanks just after 5 PM on Friday.  Total cargo weight is 12 t, which is not a problem for our Volvo truck.  Our trip will consist of 420 km land distance and a short 85 km ferry ride.  Again, total trip time is under 9 hours.  Let’s roll….. 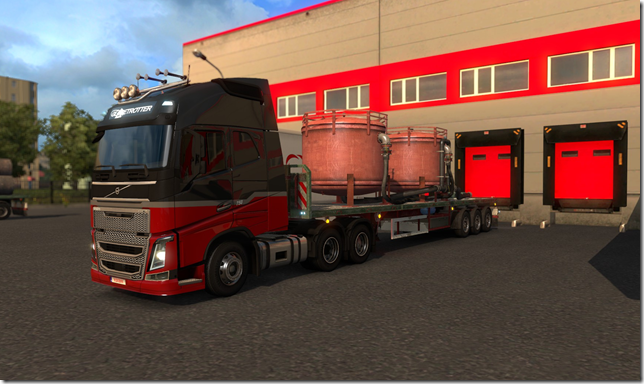 This seems to be the order of the day, lot’s of road construction as we navigate our way across Estonia for the first time. 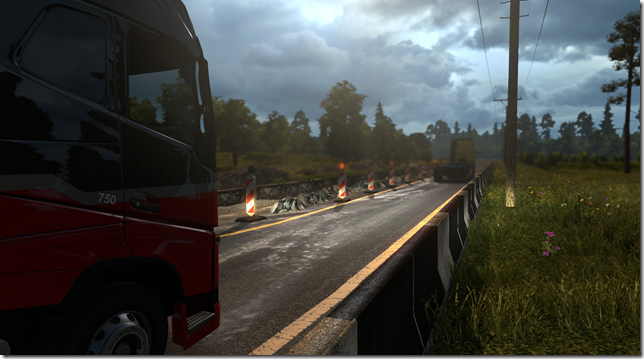 Even in real life, I can’t pass up a windmill sunset photo opportunity.  (somewhere in Estonia) 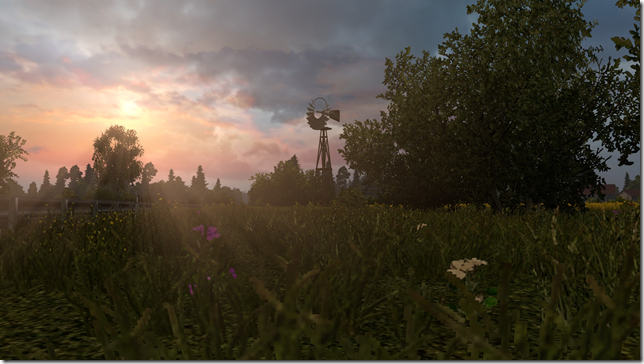 We arrive at the Bayer plant in Helsinki, Finland on-time just after 1 AM. 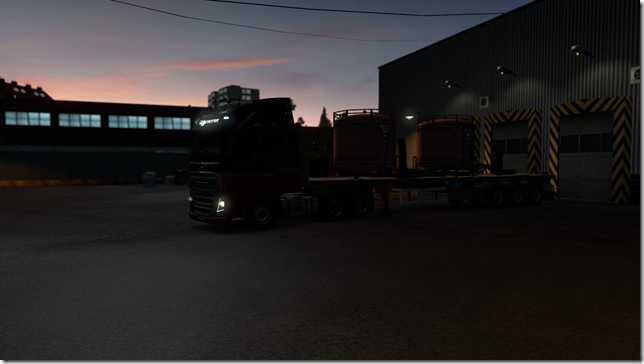 All-in-all this was an uneventful trip.  We’ll rest up here in Helsinki and decide which direction we want to proceed from here. 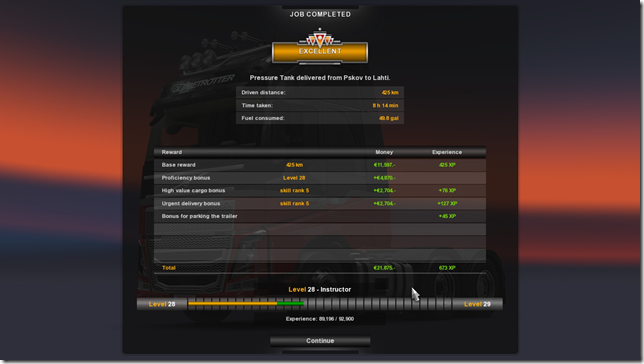 I realize the RusMap map mod for Euro Truck Simulator 2 is far from new.  As you probably know, this map mod includes 30 cities in Russia and 12 cities in Belarus.  The most current version of RusMap is version 1.6.1 which was released on or about 21 February 2016.  As the blog title suggests, this is my first experience with this map mod.

My overall experience with ETS2 really only dates back to early 2015.  I picked up both expansion DLC packs including Going North and Going East, then sometime after I tried the Promods map mod which opened up a huge chunk of Europe to me and really felt that was enough.  With Promods I’ve explored as far North as Iceland and down towards Romania, then east into Poland.  But I’ve also kept my eye on the RusMap project and after updating Promods to the latest version I decided it was a good time to look at RusMap.

With regards to map mods available for ETS2, there are several.  The ones I keep hearing the most about are Promods, RusMap and TruckSim Map.  From very early research, I kept hearing that Promods was the best, had the best support base and was the most actively developed.  So that was what I chose as my first map mod.  From further research I’ve learned that Promods and TruckSim Map will not work together. But RusMap will work with either Promods or TruckSim Map.  So just remember, RusMap will work with either…but PM and TSM don’t work together.

Moving along and getting us back on track…

The RusMap mod for ETS2 connects the Belarus and Russian cities with the Going East DLC at the town of Brest.  There are 30 cities in Russia and 12 cities in Belarus to explore. 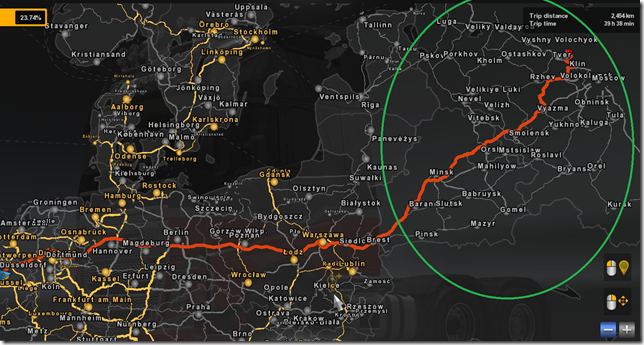 The following images were captured during a recent drive through Belarus and Russia.  I’ve found no technical issues or glitches.  I’ve personally never visited this part of the world, but I’m certainly pleased with the quality and level of detail I’m seeing with the RusMap mod.

Besides trees, fields, houses and other buildings…the RusMap mod appears to have more “people” activity than I’ve noticed with the base ETS2 game or with Promods.  I like this.  It gives more eye candy to look at while we drive.

The developers even included beautiful Russian architecture to marvel at while we drive by.

All in all I’m really pleased with the RusMap mod and I highly recommend it to anyone wanting to expand their ETS2 experience.  As I’ve pointed out, RusMap also works well alongside the Promods ETS2 map system.  I hope you enjoy it as much as I do.

Our Trucker’s Logbook #4 once again has us in Europe.  I’ve been spending a little more time playing ETS2 versus ATS.  As I’ve stated before, I do love ATS.  But I’ve spent almost 60 hours playing since it was released a few weeks ago and I’ve discovered all cities and I’ve explored almost 100% of the map (CA and AZ).  I’m hearing Mantrid is going to include I-10 to his Coast-to-Coast Map and more than likely that will force me to drive that route so I can drive through my birth state of Texas.  But my feelings on the Coast-to-Coast map are mixed.  I’ll  just say that I prefer quality over quantity and leave it at that for now.

Speaking of quality.  I recently updated my Promods ETS2 map to the latest and greatest version of 2.0.1.  Also, I’ve installed the RusMap which adds 30 new cities in Russia and 12 new cities in Belarus.  It’s been a while since I’ve headed east across Europe and Promods have done a lot of work on their Poland map (Poland Rebuilding) and it was merged into their Promods map system several releases ago.  But this is the first time I’ve ventured out in that direction since they added it.   I actually have reviews for both Promods and RusMap in the pipeline, so certainly keep an eye out for those blog pieces coming soon.

As previously mentioned, our logbook entry for today has us in ETS2.  We are going to head to Russia and do some exploring around the (new to me) RusMap map mod.  The job we are taking is hauling three forklifts from the Bayer company in Brussel’s Belgium to StoraEnso in Tver, Russia.  The total weight of the three forklifts and trailer is 11 tons.  The total trip distance is 2,454 km (1,525 mi) with an estimated travel time of 39 hours, 38 minutes.   The job is paying €103,036 or €41.67 /km.

Our route will take us out of Belgium across Germany, then through Poland, across Belarus and finally into Russia.

Our day starts out on Friday just before Noon at our garage in Brussels.  We have a large thermos of coffee and plenty of snacks for the trip.  Our pickup location of Bayer is just around the corner from our garage.

We arrive at Bayer and the trailer and three forklifts is ready to go.  We back up, hook up and do a quick inspection of everything.  It’s time to roll….

As we depart Brussels, we enter into Antwerp.  The snapshot below is looking at the Cathedral in Antwerp and is one of my favorite places to visit.  I’ll visit here in real life this coming July and I can’t wait.

The snapshot below is more for commentary than it is to really document our trip.  But somewhere in Germany I saw this ICE train rolling by.  What interested me about it that it is a long train.  I’m pretty sure this train is part of the default ETS2 and not part of ProMods.  If my thinking is correct, and this is part of the default ETS2…they why did SCS Software give us such short trains in American Truck Simulator?

It’s been a really long day and we’ve covered a lot of miles during day 1, leg 1.  It’s approaching 20:30 and we are yawning.  We pull into this Shell station to fill up before resting.  But what’s interesting about the screenshot is the TWO fueling points.  I’ve never seen that before and I think it is WONDERFUL.  With some of the larger truck stops we see in ATS, we need more than just one fuel point.

It’s still raining…and while I might be hungry…I think I’ll just pass the Mickey D’s on by.

All the toll booths.  We must be in Poland.

This guy was trying to tell me something.  But we are just gonna keep on rolling….

Day two comes to a close and once again we are yawning our self crazy.  We pull over and stop just before we reach the border of Poland and Belarus.  Day three (Sunday) also starts off much like day two with rain.  Let’s head to Belarus.

“Here Comes The Sun”  Now where are those sunglasses?

Rolling through Russia, we see a lot of cars/trucks pulled over on the soft shoulder.  Many of the people appear to be ready to throw down with each other.  Peace folks…

I was hoping we would be able to make our delivery on Sunday (mid-afternoon) without the need to rest prior.  But we were held up in traffic and we would likely be falling asleep trying to drive the last 25-30 km.  So we are going to have a rest here.  We have plenty of time and should make our delivery sometime late Sunday night or early Monday morning.

As we wake from our rest, it is Sunday evening just before 8 PM.  We have just another few hours until we make our delivery.  The developers of RusMap have made sure to include some beautiful Russian architecture.

We have reached our delivery destination and they are happy to see us.

Despite a speeding ticket we received in Belarus, our job completed with excellent results.

While this job was not our longest completed.  That would be our ATS Coast-to-Coast run we did a few weeks ago.  This job did take much longer and is perhaps our longest (measured in time) job to date.  The time required was just shy of 3 hours.  But well worth it.  I’m going to do mostly short-haul jobs in Russia for a few days and try to explore more of the RusMap before I pickup another long-haul out of this region.  It was a of fun and I’ll be sure to get back to Russia and Belarus compliments to RusMap for providing this wonderful add-on map mod.

Счастливый Грузоперевозки  “Happy Trucking in Russian”  Or at least that is what Google Translate thinks it is.