In addition to sore, tired muscles from a weekend of major DIY work (see photo below), I also woke up to some really awesome news about the upcoming (sometime in 2020) Microsoft Flight Simulator.  More about this in just a bit.

One of the reasons why I haven’t been very active posting articles on my blog site has been primarily due to the fact that most weekends since I’ve returned from my European Vacation, I’ve been either up a ladder or crawling around on my hands and knees.  Long story short, we returned from vacation in early August to find an upstairs leak that had ruined our kitchen ceiling.  While much of the work to repair the kitchen ceiling was covered by insurance (and performed by contractors), we decided to also repaint and redecorate much of the rest of the house in the process.  After all, new paint in the kitchen will just make the 12+ year old paint in the rest of the house look dingy. 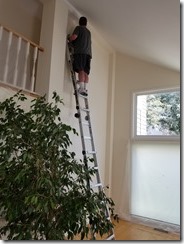 The above picture is me working on painting the edges where the wall meets the ceiling. 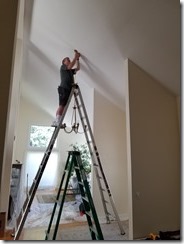 The second photo is me preparing to install a new light fixture in the entry hall way.

We still have a few more weekends of work before it’s all done.  But once it’s done, the entire interior of the house will have a fresh, new coat of paint.  But enough about this.  I’m getting tired just thinking about it.

You may recall, I discussed the new Microsoft Flight Simulator which we all first heard about back in June.  You can find these two articles here and here.  In both articles, I expressed my guarded reservations but tried to be as optimistic as possible on this news which hit the flight simulation community by complete surprise.  After all, many of us are still bitter about Microsoft turning their back to the community not once, but twice and we all questioned why they would want to re-enter the flight simulation space.

If you have 32 minutes of spare time, I would like to direct you to a video by FroogleSim.  Pete discusses his recent trip out to Microsoft to see and experience the brand new Microsoft Flight Simulator which has been in development for the past 5 years.  Unlike some of Pete’s other videos on this subject, he actually did a very good job and he admits he was initially wrong about the opinions he first expressed back in June.  Again, if flight simulation interests you…then the video below is a must-see.

OMG!  Yes, literally…Oh My God!  Bottom line, we still just have to wait and see.  But I’ve seen enough and heard enough to realize that 2020 is going to be an amazing year in flight simulation.  We don’t have all the answers to the million and one questions yet to be asked.  Initially this new sim from Microsoft may not be able to tick all the boxes (multiplayer, third-party add-ons etc.), but I believe Microsoft Flight Simulator will once again regain its place at the top and re-write history.  I personally don’t see it immediately replacing P3D/X-Plane, but once we can begin to have access to a wide range of study level aircraft, online multiplayer (VATSIM) then I believe both P3D and X-Plane will begin to see a decline.

Thanks for taking the time to read my blog.  I hopefully will return soon to posting more content about flight simulation and other simulation based game topics here.  Until then….