After a relaxing few days along the eastern coast of Australia, our tour departs Cairns headed west for Broome, Australia.  Our tourists will spend a few days in this Australian coastal city doing a little pearl hunting and seeing many of the other sights around the area.  The excitement is high and the morale of the passengers is very good.  Our flight today will be an equipment transfer for TigerAir.  TigerAir is one of Australia’s low-cost airlines and in addition to shuttling our tourists from Cairns to Broome, we’re also assisting TigerAir by moving this Boeing 737-800 over to Broome.  While this flight leg is not the longest we’ll experience during our tour, it’s one of the longest we’ll complete in the 737.  As will be the case in each of these tour updates, I’ll post an updated route map showing our progress.  The blue icons are yet to be visited and the magenta icons are those destinations we can check off the list.  Finally, in addition to the screenshots telling our flying journey, I hope you are also enjoying learning a little something about the cities, countries, airports and airlines along our journey. I certainly am. 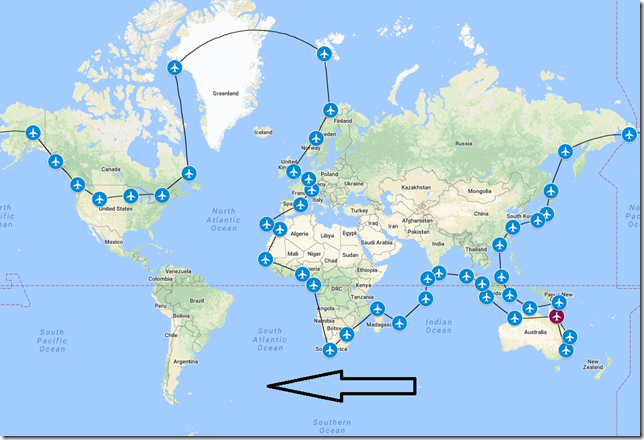 An updated version of our tour map showing Cairns as visited.

Broome is a coastal, pearling (as in pearl hunting) and tourist town in the Kimberly region of Western Australia. According to the 2016 census, Broome has a population of 16,000 but grows to over 45,000 in the peak tourist season.

As for Australia, officially named the “Commonwealth of Australia” which is a sovereign country comprising the mainland of the Australian continent, the island of Tasmania and numerous smaller islands. It is the largest country in Oceania and the world’s sixth-largest country by total area. Neighboring countries include Papua New Guinea, Indonesia and East Timor. Our tour will actually visit both Indonesia in just a few legs and PNG towards the end as we make our way back to Sydney.

The Broome airport is a regional hub of the northwestern part of Western Australia and is the 20th busiest airport in Australia. It also has just one runway measuring 7,769 feet (2,368 meters) in length and is one of the reasons we’re once again flying a Boeing 737.

Like Cairns, the Broom airport is a payware add-on airport from Orbx.

Today we are flying for Tiger Airways. TigerAir is an Australian low-cost airline which began operations in 2007. While TigerAir does operate out of Cairns, it does not fly to Broome. I was rather limited due to runway length so I chose to fly the 737-800 once again for this flight and was also limited in the choice of airline livery I could locate on the internet. Just as a point of reference, there are no real-world flights which operate direct between Cairns and Broome. Passengers wishing to fly between these destinations in the real world would most likely connect through major hubs in either Sydney, Perth or Melbourne.

But as I mentioned on the first video of this tour series, my goal is to add as much variety in the aircraft type and also airline brand as possible.

It’s June 4th and our holiday travelers have thoroughly enjoyed their stay in Cairns.  We have an early afternoon departure of Cairns and should arrive in Broome in plenty of time for dinner.  As you can see from the map above, our route will take us southwest to Alice Springs, then northwest to Broome.  As previously mentioned, we flying a TigerAir Boeing 737-800 and once catering has finished we’ll be ready to button up the doors and push back from the gate. 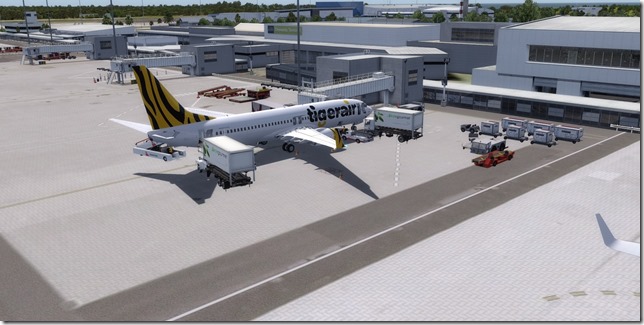 Push and engine start complete.  The marshalling team from Cairns have been top-notch and first class all the way. 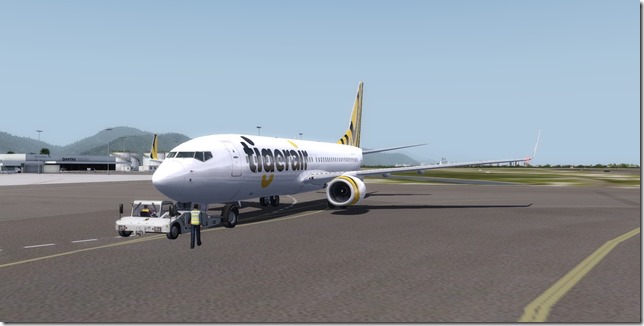 With Cairns being a relatively small airport, the taxi out to runway 15 was short and we’ve been given our take-off clearance. 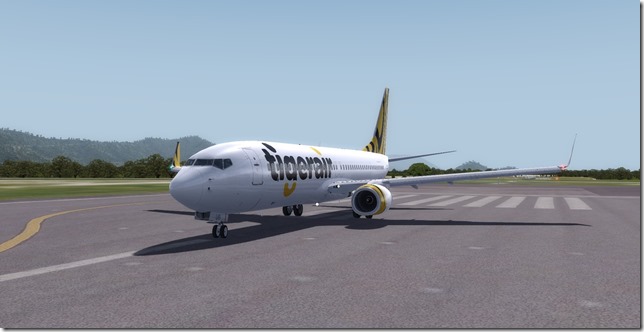 An awesome view as our TigerAir 738 turns to join the departure out of Cairns. 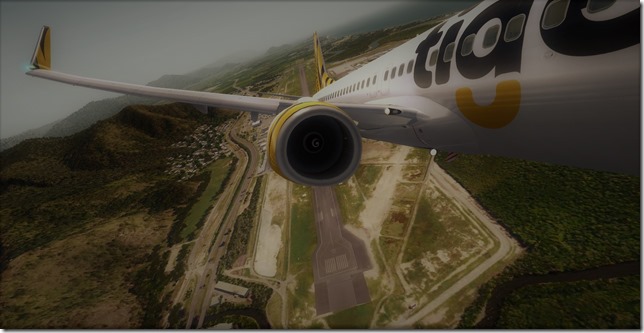 Wing views are always my favorite.  Cairns airport in the background. 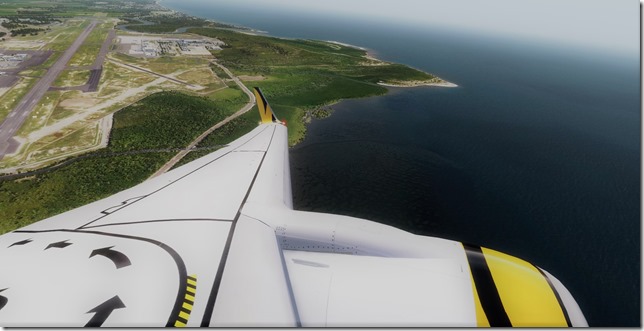 Once again the immersion effect from FSFX Packages is well worth the cost. 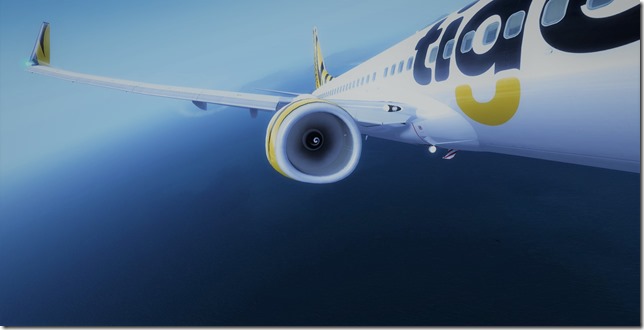 During our previous flight from Sydney to Cairns, the ground vegetation was just as it appears here (lush and green) but will soon change. 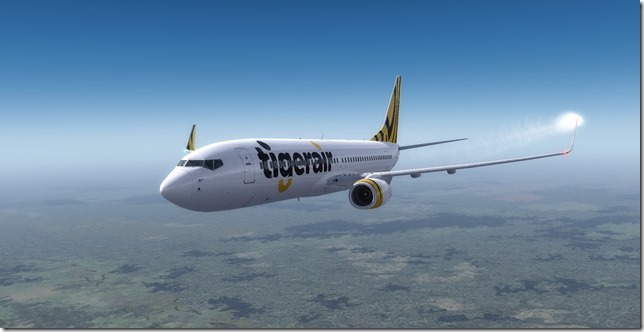 As we headed west, the ground textures changed to a more desert and baron look. 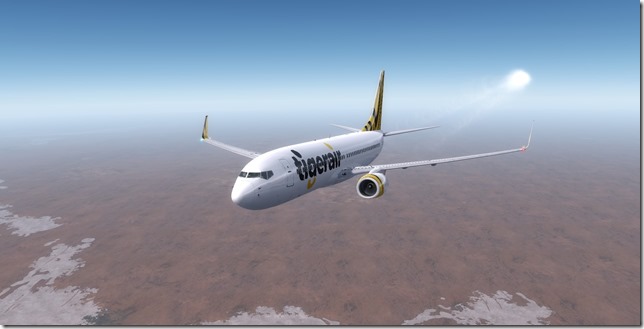 Another wing shot as we’re descending.  Speed brakes are up to slow us as we near 10,000 and our 250kts speed restrictions. 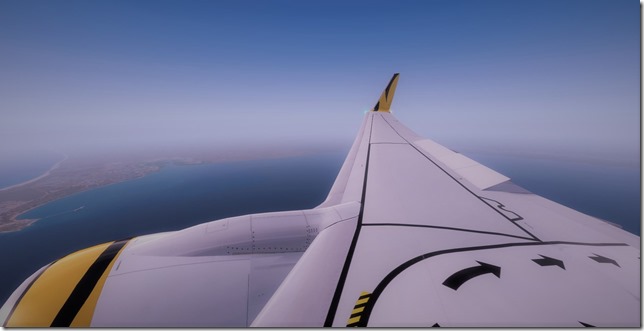 Making our final turn to line up for the visual for runway 10 at Broome. 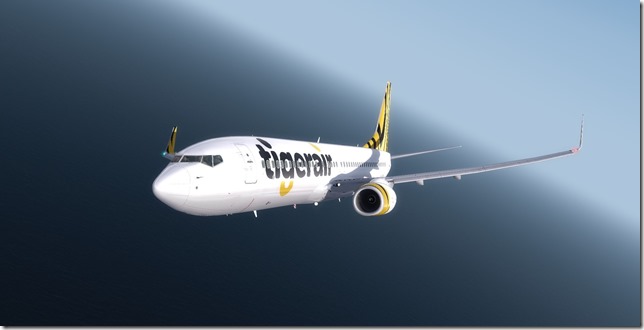 Runway 10 is just visible in the haze.  No ILS at YBRM. 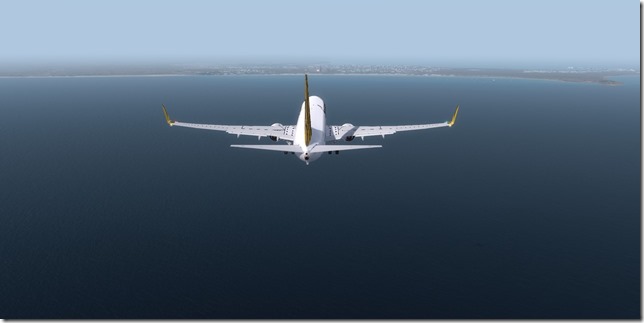 Still just a tad high on final according to the PAPI lights which show three white, one red. 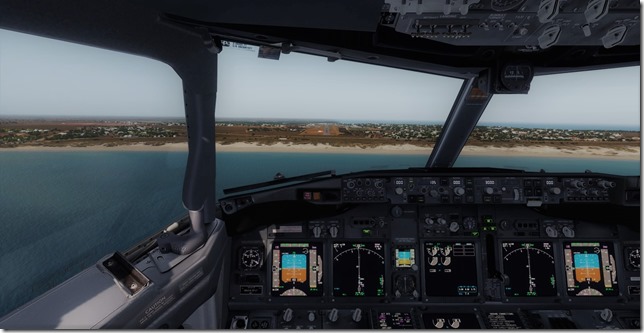 There we go, red on white…we’re alright! 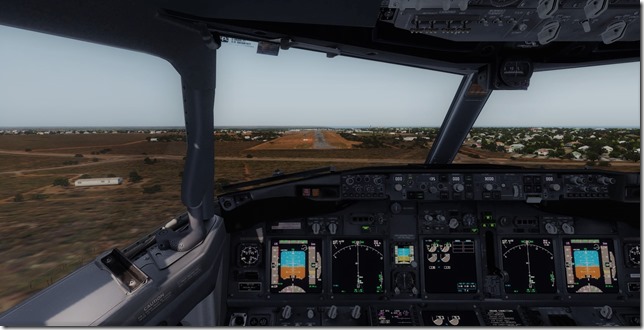 One final shot of our TigerAir B738 all parked up and secure at Broome Airport.  Our tourists will spend a few days here exploring and pearl hunting.  In a few days we’ll depart Australia and head northwest to Indonesia.  Due to the short runway at Broome, once again we’ll be flying the Boeing 737.  But this will soon change. 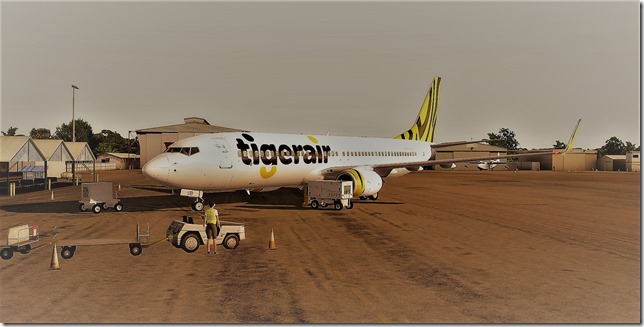 Thank you for taking the time to read this report.  Our next flight will depart Broome, Australia for Jakarta, Indonesia.  As previously mentioned, due to the short runway in Broome, our flight to Jakarta will once again be in a Boeing 737.  However, once we reach Jakarta…our next two legs will feature the Boeing Triple Seven (777) and the Boeing Dreamliner.