If you’re new to the world of flight simulation, especially since the release of Microsoft Flight Simulator 2020, did you know that not all add-on, payware aircraft are created equal?  Since the release of MSFS back in August 2020, many quality payware developers have been hard at work in creating study-level, true to life representations into the sim with so many more to come in the future.  I routinely talk about two of my favorites with that being PMDG and Fenix.  But there are a few payware aircraft which have been released in the past few months that in my opinion caution needs to be considered before purchasing.

There seems to be a trend being set by a few payware developers to be the first to release various add-on aircraft in the Microsoft Marketplace in what many are calling a “cash grab” effort to sell payware aircraft which utilize existing default aircraft models.  CaptainSim was I believe the first when they released their Boeing 777 which utilized the default Boeing 747 systems.  A few months ago, LatinVFR, which are renown for their top-quality airport scenery add-ons, released an Airbus A321 which uses the default Airbus A320 systems and are planning to soon release an Airbus A319 in the same fashion.

It must be said that those who enjoy MSFS on the console platform are very unlikely to see true study-level aircraft from PMDG, Fenix etc. So I guess I do understand there is a potential market for these aircraft for those on the console platform.  However, if you enjoy MSFS on the PC platform….I’m of the opinion these “Frankenstein” type aircraft are a waste of money and/or certainly not worth the asking price.  Especially when you take into consideration the FBW A320 project is 100% freeware and the Fenix A320 is priced at just over $55 USD.

Again, the reason why I chose to write this article and publish it, is because I know many have been duped by this and thought they were buying a more complex add-on aircraft.  Of course if none of this matters and you’re really not bothered by the fact these aircraft are not true representations, then by all means add them to your virtual hangar and enjoy them.

As always, thank you for reading and happy flying!!!

As a beta tester for A Pilot’s Life, I needed to change airlines to test new features which debuted with version 1.33 which was released in late June.  These new features (including multi-hub and multi-leg routes is a very nice addition to an already wonderful add-on application.  If you’re not a user of A Pilot’s Life, I encourage you to check it out.  You won’t be disappointed.  Links can be found below.

I hit the breaking point with Alaska Airlines.  While I truly enjoyed my time both in Seattle and San Francisco, I just wasn’t getting enough flight hours.  I’m hoping to eventually make Captain and  of course I still need to earn a living.  After arriving back to SFO from Palm Springs, I was told my next flight wouldn’t be for another week.  So I went home and called the recruiter which had contacted me with an offer from Southwest Airlines.

At this point I was getting pretty desperate.  While each of my career moves have been working my way up both the career ladder as well as the salary scale.  I just wanted to work and fly.  Southwest Airlines wanted to meet with me and they flew me down to Dallas.  Things just clicked and soon I was offered a position as Sr. First Officer and they even bumped by pay rate up to over $40.00 per hour.  WOW.

While I still hope to land a job with American Airlines (at some point), I’m willing to wait until I reach Captain if necessary.  Southwest has assured me that if I’m willing to work, they’ll certainly keep me busy.  The other exciting them I’m looking forward to with SWA is their multi-leg route structure.  I’ll be honest, after a while of flying hub/spoke flights, one gets a little bored.  While some SWA flights are hub/spoke, the majority are multi-leg routes and I’m really looking forward to this.  So for now, I’m going to keep my apartment in San Fran and see how things unfold over the coming weeks.

Today we’re operating the first of three flights out of Hotlanta (Atlanta).  Yes, it is HOT, HOT, HOT today.  Our first leg will have us flying down to the Big Easy (KMSY) then over to Fort Lauderdale (KFLL) then back to Atlanta.  I guess when Southwest said they could keep me busy, they actually meant it. 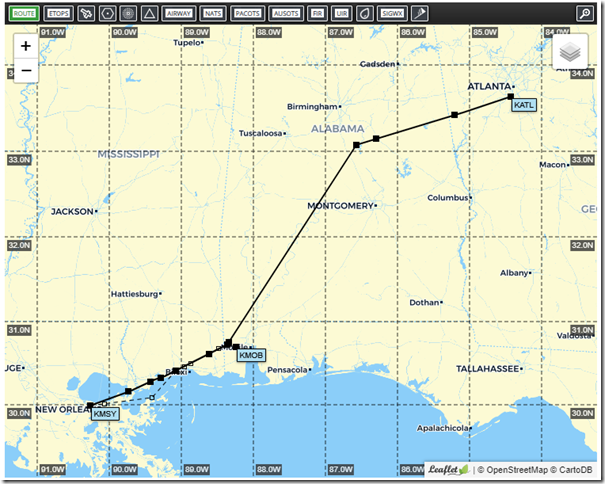 It’s Time to Feel the Love

I’ve gotta say, I enjoyed my time with Sun Country (gosh that feels like ages ago) and I did enjoy most of my time with Alaska.  But I must admit that the folks at Southwest are some of the friendliest I’ve met.

After a quick walk-around inspection, we’re all buttoned up and ready to roll out of here.  I think the captain knows what might happen with these storm clouds and he’s not wanting to waste anytime. 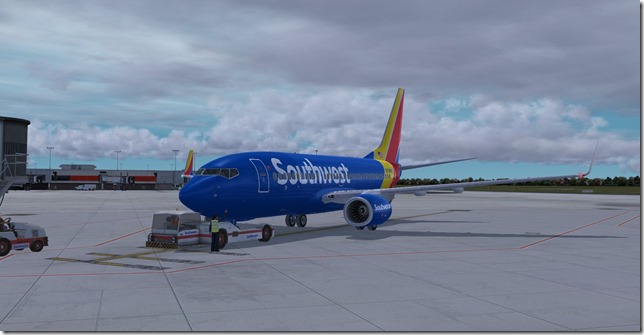 The Atlanta airport is HUGE and a very busy place.  Usually…. 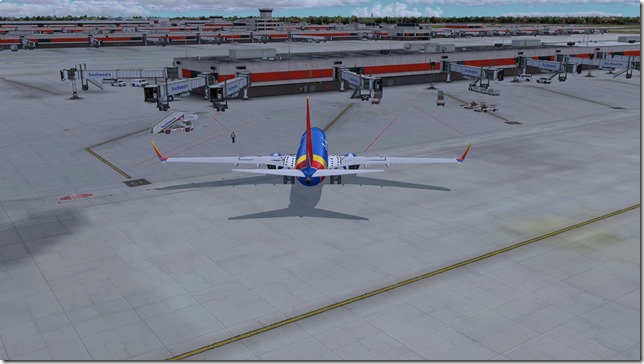 Taxing out to our active runway 27R. 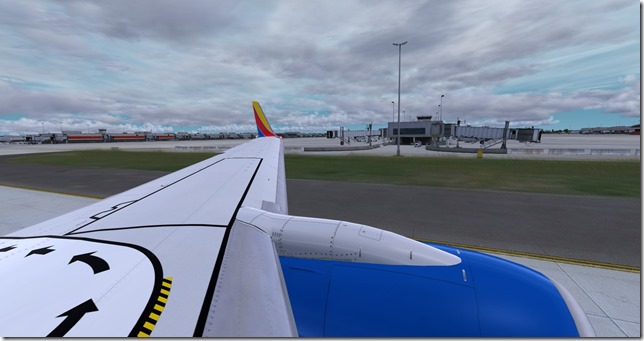 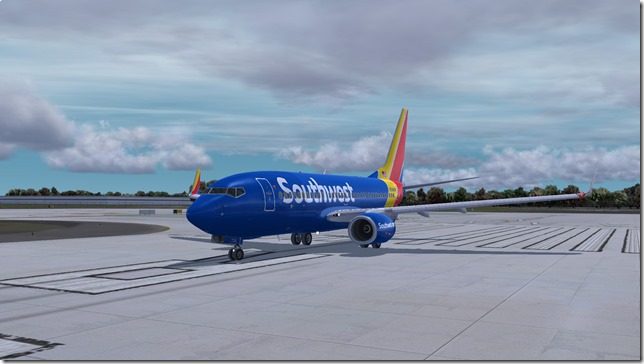 Wheels up, my inaugural flight with Southwest Airlines is underway. 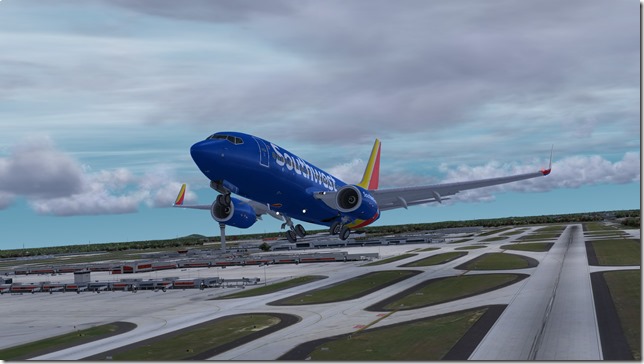 Making our left turn direct POUNC and climbing up to 10,000. 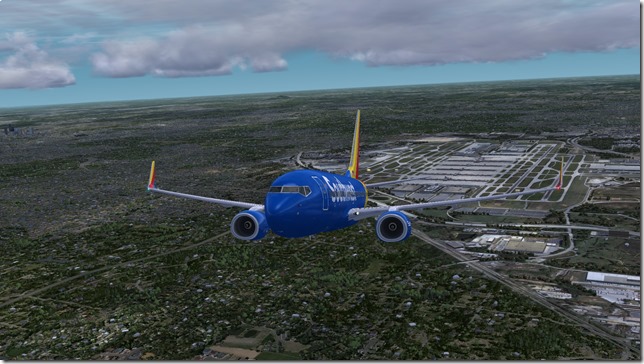 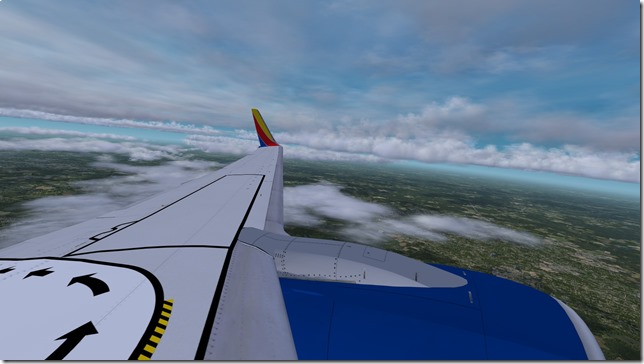 After a relatively short cruise, we’ve started our descent.  The Gulf of Mexico is just in the distance. 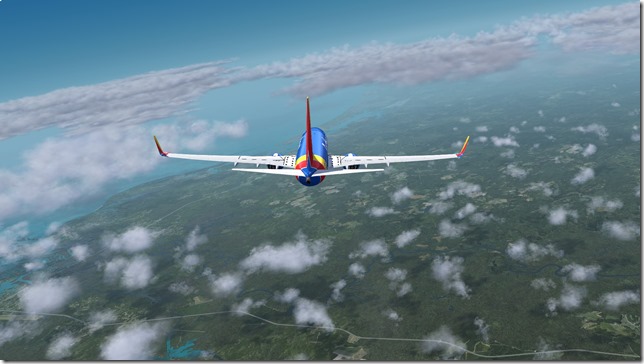 The Gulf of Mexico is normally not this blue. 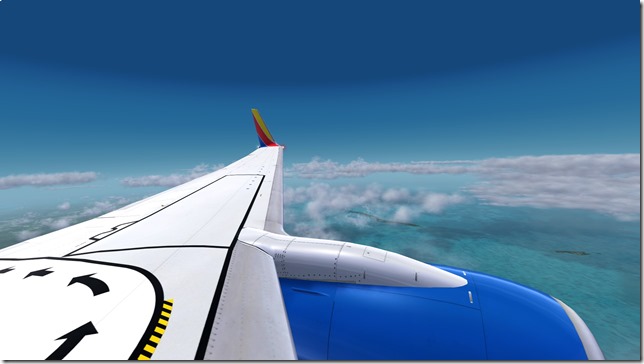 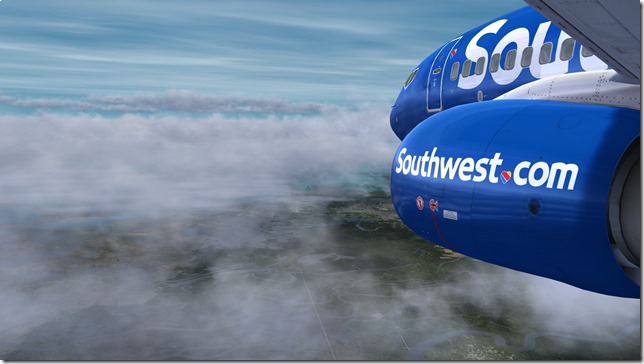 The Huey P. Long Bridge which spans the Mississippi River and the New Orleans skyline. 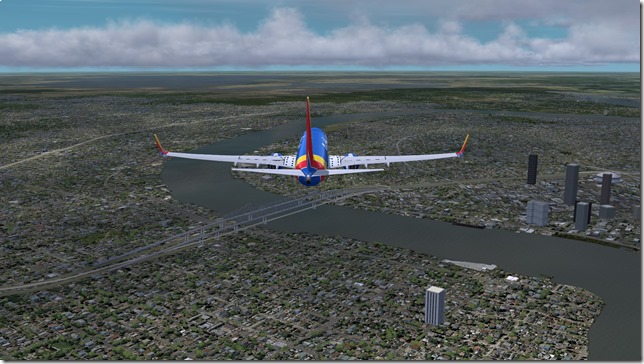 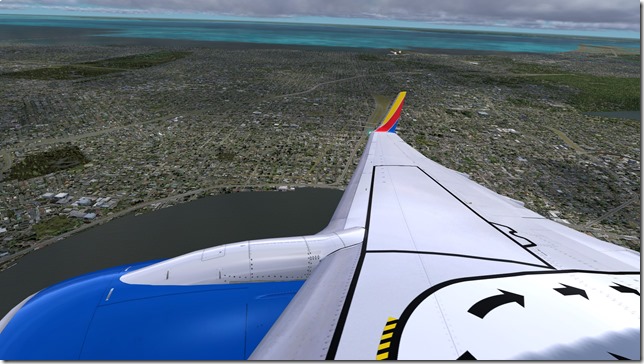 Clear the visual for runway 29. 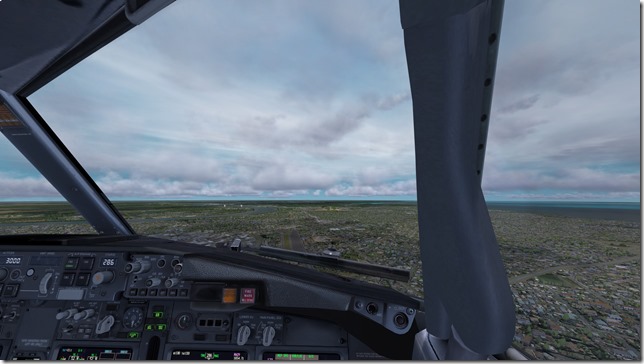 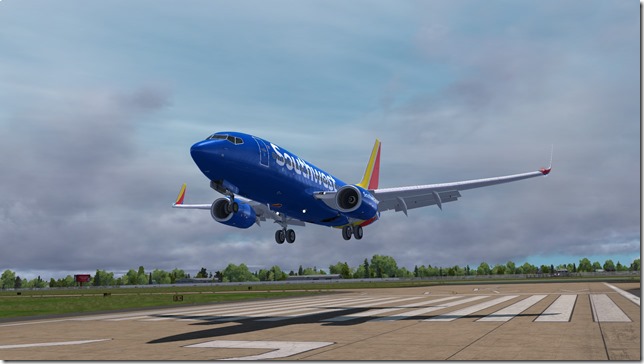 The ground crew and baggage handlers working hard to get us turned around quickly. 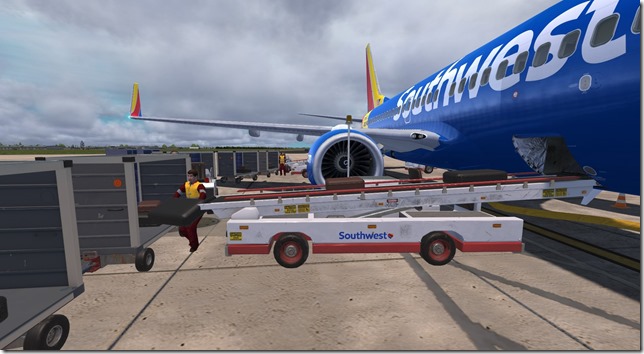 This was a wonderful first leg of what I’m sure will be a fantastic trip.  I’m really excited about the opportunity fly for Southwest and build my career.

Note:  If you are interested in any of the above mentioned add-ons.  Visit my P3D Add-ons directory for links.