We’ve officially reached the point in the calendar where GIANTS Software will begin releasing weekly updates on the quickly approaching release of their much anticipated (and hopefully not over-rated) Farming Simulator 19.  Each week (or thereabouts) a #FactSheetFriday update will be available from GIANTS and will feature information and specifications on the over 300 vehicles and tools to be included in FS19.  While I’m sure most of us just wish 20 November would hurry up and get here, I actually enjoy the way GIANTS pumps up the hype on their new updates.

As I’m in the process of easing back into producing Farming Simulator 17 content on my GrizzyBearSims YouTube Channel and after an almost three month hiatus, I plan to discuss many of the new features we can expect to see in FS19 and have decided to do much the same here on my blog site.  So each week after GIANTS releases a new #FactSheetFriday announcement I’ll provide some opinion and discussion regarding what we’ve learned as we patiently await the release of Farming Simulator 19.  I’ll try to release these on Friday (or as close as time permits).  Today I’m enjoying my lunch while writing this posting for you.  Finally, As I was on vacation last week when GIANTS released the first #FactSheetFriday, I’ll include both last weeks and this weeks announcement in this posting.  Let’s get started…

GIANTS Software kicked off their popular #FactSheetFriday weekly updates by showing the first of four fact sheets on equipment we can expect to see in Farming Simulator 19 which releases on 20 November.

The first of the four fact sheets covers the AGCO IDEAL Combine Harvester and matching header.  If memory serves me, the IDEAL Combine was one of the first images GIANTS published many months ago regarding equipment that might be included in FS19.  She’s a beauty and will most certainly look great on your virtual farm. 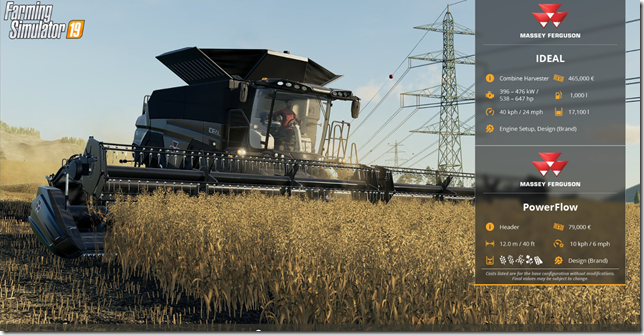 The next image shows the Fendt 1100 MT and the Elmer’s Manufacturing HaulMaster large auger wagon.  While I do like Fendt tractors, I’m certainly hoping this tracked version handles a bit better than the Challenger provided in FS17. 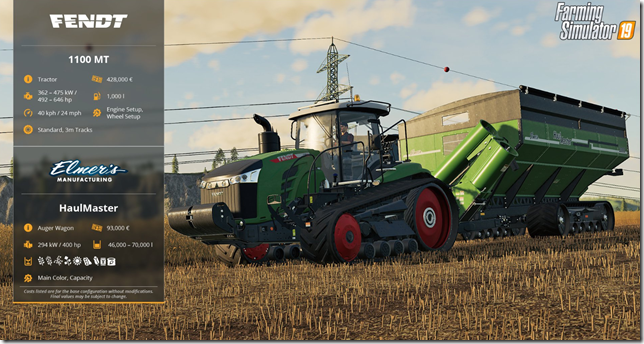 Next up is the Samson Slurry Tank and matching drip hose boom attachment.  I think what excites me most about this entry will become a bit clearer in the next photo. 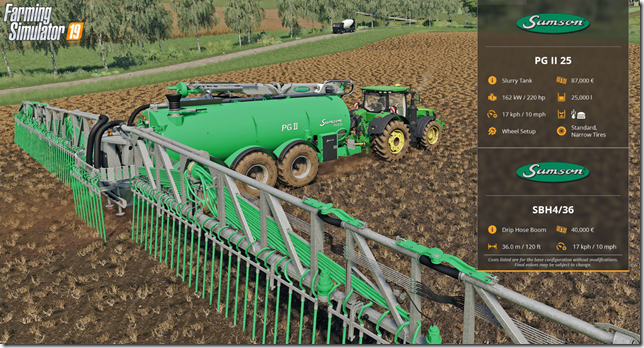 In the 4th image from #FactSheetFriday week 1, is of course the John Deere 8R series tractor and the Garant Field Container for slurry and digestate.  If I had been a betting man, and someone offered a wager a year ago if I thought John Deere would ever make it into Farming Simulator, I would have said NO WAY!  I’ve actually said “No Way” many times when folks asked my opinion.  But…I would have lost that bet as GIANTS managed to pull it off and this is great news for all of us.  Plus it’s not just the JD 8R we’ll see in game. 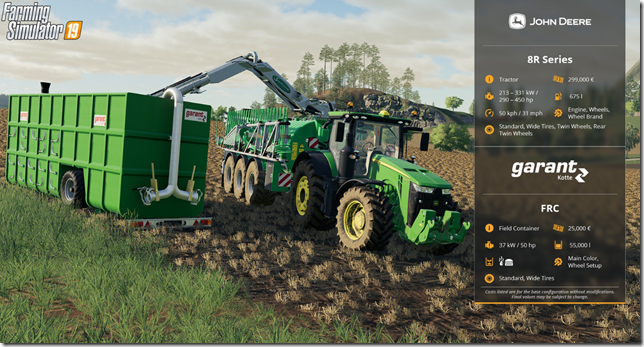 Of the four images featured in the first week of #FactSheetFriday it was hard to narrow the list down to one favorite.  I can say that perhaps the one I’m least excited about is the Fendt tracked tractor and Elmer’s auger wagon.  While I’ll certainly use them in FS19, we’ve had similar in FS17.

As for most excited, it’s a tie and for different reasons between the John Deere 8R and the Samson Slurry Tank.  I know everyone fell over backwards when it was confirmed that John Deere would be in the game and yes…that’s absolutely fantastic news.  But the reason I’m pleased about it is because while JD tractors are common mods for FS17, most of them are absolute junk.  There are a few which both look and perform really well…but the vast majority are just junk.  So having JD as an officially licensed partner to GIANTS should open the door for other models produced by GIANTS and this will be a good thing.

The Samson Slurry tank….I know…it’s main purpose is to spray liquid poo onto the field.  How exciting can that be?  If you look at the image just above, you see the boom reaching out from the slurry tank to the field container?  Yep…that’s immersion folks and I like it.

Alright, so hot off the presses for the week ending 14 September Giants has once again teased us with four new fact sheets.  These are all in the category of “Go Big, or Go Home” and you know how much I enjoy big time farming.

The first image shows the mighty Case Quadtrac and Wilson Pacesetter grain trailer.  The Case Quadtrac has been one of my favorite “in game”pieces of equipment since FS15 and I am very much looking forward to tearing up some ground in FS19.  I’m going to further discuss the Wilson trailer at the end of this section. 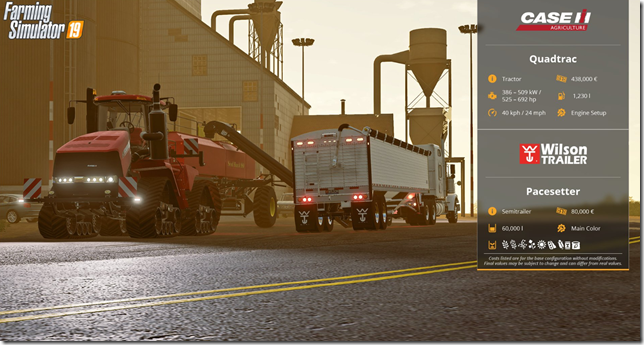 Image two shows off the Vaderstad Seed Hawk in all her glory.  This will really help make quick work of what will hopefully be some massive fields to come to FS19. 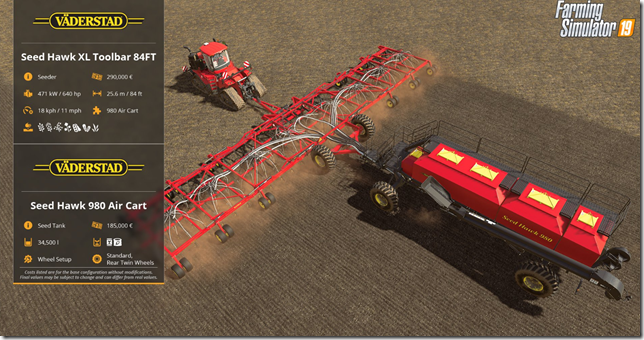 Farming Simulator just wouldn’t be the same without some Grimme equipment and this isn’t the same old potato harvester we’ve had in FS15 and FS17.  I look forward to growing some spuds and putting this girl through its paces. 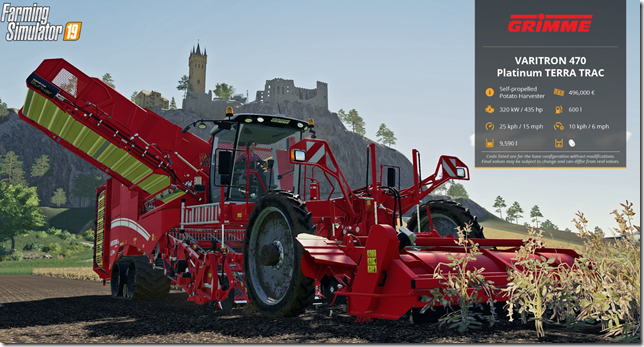 The 4th and final image of the week two #FSF is the Hardi Rubicon 9000 self-propelled sprayer.  While the sprayer itself isn’t all that exciting since we’ve had these types of equipment in previous versions…it’s the idea that this rig will spray herbicide products that will kill weeds.  While the weeder in FS17 was cool for about 5 minutes, it really lacked immersion.  Now that we have weeds that grow in our fields, this little sprayer is going to help you maximize your virtual profit like never before. 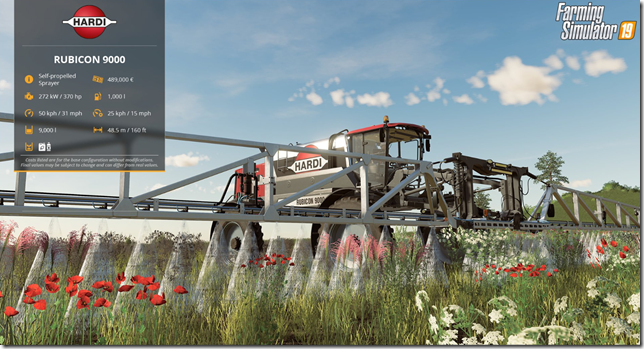 My final thoughts for the week two #FactSheetFriday announcement was fairly easy for me to rank from most excited to least excited.  The Vaderstad kit and the Grimme are at the bottom of my list simply because we’ve had variations of both before.  While I’m totally excited about controlling weeds on my virtual farms, it’s actually the Wilson grain trailer that truly has me excited and here’s why.

Until now, all the “in game” trailers all look European.  While there are modded versions of the Wilson and other brands commonly seen around USA farming operations, much like the John Deere mods…they all seem to have issues.  While I absolutely love mods and use a ton of them.  The one thing we can be guaranteed of is the reliability of the Giants models and it’s that little point that has me excited about the Wilson grain trailers being added to FS19.  Remember, key word immersion and they’ll look awesome on our US virtual farms.

Well there you go folks.  Am I right or am I wrong in my opinion regarding these two #FSF announcements?  What are you the most and least excited about?  Leave a comment or join me on the GrizzlyBearSims Discord Server and we can talk about it.