Happy Friday to all.  This is the last Friday in the month of September which just brings us even closer to the 20 November release of Farming Simulator 19.  Today I present to you the 4th installment of #FactSheetFriday and of course my overall opinions of what we’re seeing.

If you’re like me and found the #FactSheetFriday entries last week to be a bit boring, you’re not alone.  Many of the folks I interact with felt the same way.  I believe most will find this weeks version to most certainly be more exciting than last.  Especially if you are as excited about harvesting cotton as I am.  Let’s dive in.

We kick things off with a bit of the same old, same old with the Challenger MT800E Series tracked tractor.  This was the tractor I was excited about in the early days of FS17.  But simply due to the nature of how it handled with Courseplay, I eventually learned just not to even try.  If you remember back to #FactSheetFriday week 1 (7 September) where we were introduced to the Fendt version of this tractor I once again felt hopeful.  Time will tell…but at least we can say we’ll have a bit of variety for this type of tractor in FS19.

In addition, the Bednar cultivator shown attached to the Challenger is a 6m cultivator which will seed and fertilize and will require a tractor capable of 500HP.  While I’m not sure if everything is purchased as one unit, according to the Bednar website the trailing unit is a Bednar Presspack which in the real world can either be used separately or combined with other equipment as shown in the photo. 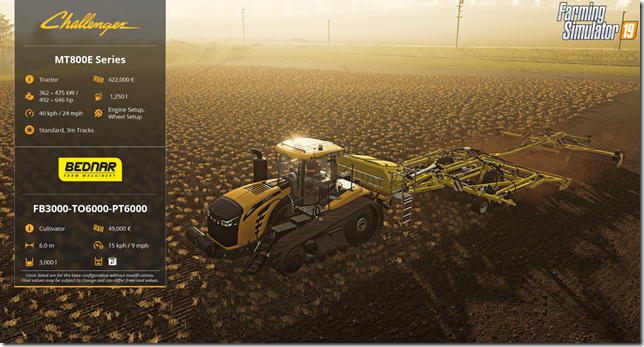 Now we’re talking.  The second photo released today by GIANTS in their #FridayFactSheet media promotion is the Case Cotton Harvester.  Honestly, there’s a lot about FS19 which excites me….but this is at the very top of my list.  The Case Cotton Harvester will feature a 6m working width and is capable of producing 20,000 liter cotton bales (or modules).  While I realize we’ve had the ability to plant and harvest cotton since at least FS15 (with mods), this will be cotton done right and that excites me. 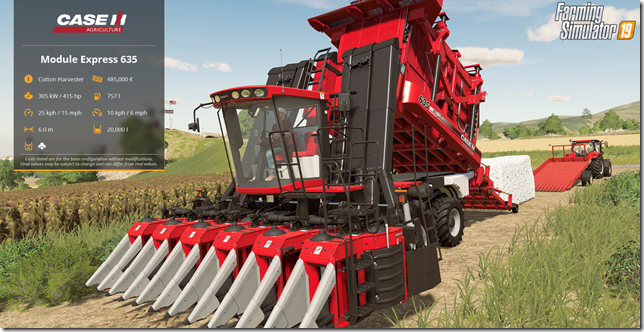 Finally we have the entry for the Case Maxxum Series tractor.  But more importantly, we see the attached cotton bale (or module) trailer attached.  While we have no specific information on this trailer, it would appear the large cotton bales are winched onto the trailer.  As another virtual farmer posted on Twitter, this trailer may also be ideal for transporting a skid steer. 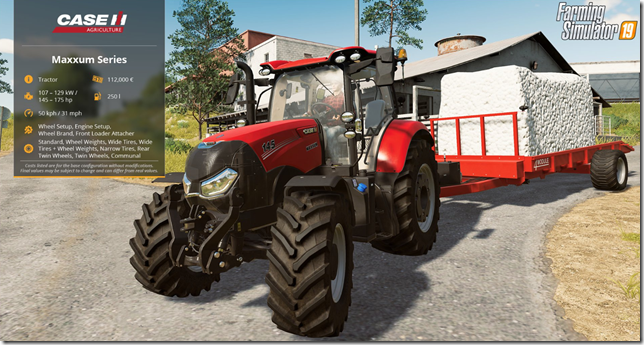 While this weeks #FactSheetFriday only contained three images and identified four pieces of equipment, simply because of the subject matter (cotton) I’m highly excited and like many, I’m counting down the days until the 20 November release of Farming Simulator 19.

Everything I’ve seen, everything I’ve read all indicate to me that GIANTS are moving the needles all in the right direction and doing their part to not only make their Farming Simulator franchise the best of all agricultural based simulations, but also keep it at the top for years to come.  What more could we ask for?