FlightSim Labs and why I changed my mind

Sometimes, we have the idea or the mindset that “I’ll never do ____________” (insert word or phrase) because of this, that or some other reason.  I suppose the phrase “Never, Say Never” comes roaring into my head.  By the way, did you know the first recorded mention of the words “Never, Say Never” was from Charles Dickens’s Pickwick Papers in 1837.  Anyway….I must say that I’ve recently purchased something which I’ve previously said I would never do.  I also recognize the topic of this posting is extremely controversial within the flight simulation community.  I’ll post some final thoughts at the end of this piece and will welcome any comments (pending they are civil) from my readers.  Also, will just remind anyone reading this outside of my blog website (GrizzlyBearSims.com), my writings are syndicated on a few different other websites and the opinions expressed in this piece belong to me and may or may not be the same opinions expressed by the owners of those other websites.

Before I get long-winded, let me just say right off the bat that YES, I’ve purchased BOTH the Flight Sim Labs Airbus A320 and their newly released A319 aircraft.  I’ll get into all the reasons for my change of opinions in just a moment.  First, let me just provide a little background history regarding both Flight Sim Labs (FS Labs) and their Airbus aircraft.

I first heard of FSLabs several years ago when I was researching information regarding home cockpit building and specifically some utilities FSLabs had developed for some third party hardware add-ons.  Thanks for FSLabs as their solution helped me get my GoFlight hardware working with the older PMDG 747 in FSX.  This was all around the 2009-10 timeframe. 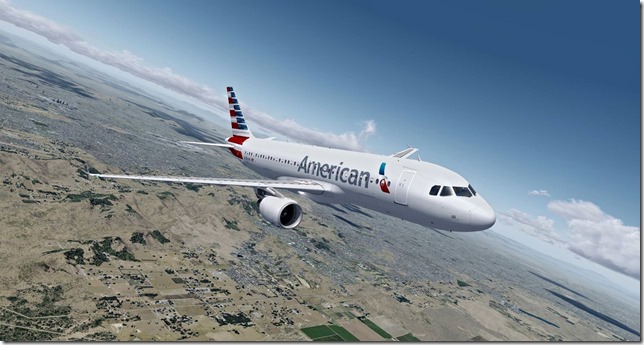 If it’s not Boeing…

So you all know the saying, “If it’s not Boeing, I ain’t going”.  Yea…I’ve felt that way for a long time both in the real world and also in the virtual sim world.  But I have this little issue…perhaps some might say it falls into the superstition category…but typically when time permits I enjoy recreating my real world flights in the simulator.  A few years ago I was flying from Denver to Indianapolis on Frontier Airlines for a business trip.  The flight was going to be on an Airbus A319 and while I really had no experience with Airbus aircraft in the flight sim, I decided to do a little research.  I discovered FSLabs offered an A320 and Aerosoft offered a package including the A318, A319, A320 and A321.  At the time, it was sort of a no-brainer decision.  I had a desire to fly the real-world Airbus A319 Frontier flight and Aerosoft had the add-on aircraft which was compatible with the sim I was using at the time.

…Into the Future.   Yes, another musical lyric segue….but now as a few years have passed since my original purchase of the Airbus product, we find ourselves one year post Prepar3D v4 (64 bit) release and while many add-on developers were quick to release their P3D v4 compatible aircraft models, scenery and other add-ons….Aerosoft (as of the time of this writing) still haven’t released their Airbus series for P3D v4.  But let me just say that this blog article is not about the Aerosoft Airbus delays.

And back to my opening sentence of this writing.  I’ve expressed my feelings towards the Flight Sim Labs PR debacle both here on my blog as well as in other corners of the web such as flight sim related forums and various Facebook flight sim groups.  If you’re not aware of all that has transpired and you don’t care to read my older posting linked above, I’ll just quickly summarize the happenings over the past several months below:

While the actions taken by FSLabs was and is a major failure on their part, certainly two wrongs will never make it right.  Meaning, the individual referring to himself/herself as “RandomRedditor” is just as much in the wrong as FSLabs has ever been (in my opinion).

Let me state once again for the record, I condemn the actions taken by Flight Sim Labs in their effort of preventing the piracy of their software.  However, I also recognize software piracy is wrong and as it relates specifically to our flight simulation hobby is directly damaging it by forcing developers to charge more for their add-ons.  In other words, here’s yet another example of honest, hard-working individuals having to carry the burden for those who would rather steal.

Last week I was watching one of my favorite Twitch Streamers from the UK, Chewwy94.  If you are unfamiliar with his channel I would encourage you to follow him.  He’s an excellent flight sim streamer, he runs a very positive and informative channel and as I said, he’s truly one of the best doing what he is doing.  Anyway, Chewwy (real name Matt) was showcasing a pre-release copy of the Airbus A319 from FSLabs.  I don’t always have time to catch all of his streams, but it just so happened that I was in Orlando for work and spent the evening watching most of the replay of this particular stream.

Yes, at the very beginning of the stream my attitude matched pretty much what I had said in the past.  More or less, that I didn’t plan on doing business with Flight Sim Labs due to their previous antics.  But the more I watched, I began to reflect back to my early days with flight simulation.  I’m often reminded just how far this hobby has come over the past 35 years that I’ve been flying computer based sims.  If you weren’t around in the mid-80’s, here’s a little video I’ve shared previously of about 60 seconds of recorded footage showing subLogic’s Flight Simulator II for the Commodore 64.

Even in the past 18 years (the VATSIM age) the level of added immersion and realism which has been given to all of us by the various developers, has truly helped to bring meaning to the old Microsoft Flight Simulator slogan of “As Real As It Gets”.  I had to take a minute to swallow my pride somewhat and realize that what I was actually seeing from my own two eyes on Matt’s stream was something I had never seen before.  Yes…truly the future of flight simulation and that future had been developed by Flight Sim Labs.

The reality of it all after watching Matt’s stream was I had two choices to make.  I could continue down the path I was walking by simply avoiding doing business with FSLabs and hope that at some future time down the road some of the advancements FSLabs had coded into the A319 would make their way into other aircraft models.  OR, I could take a lesson from a man who is of far greater importance than anyone I know and show a little forgiveness.  After all, I tend to follow the advice of this man as much as I possibly can in my life and it’s worked out well so far.

Yes…I’m the proud owner of both the Flight Sim Labs Airbus A320 and the expansion A319.  I’ve been reading, studying and learning this truly “study level” aircraft and will admit that I’ve learned more and have been challenged harder than I have ever been with any payware, “study level” aircraft add-on to date and I wouldn’t have it any other way.

The flight sim hobby is more than just about flying virtual aircraft around a virtual world.  While I have no interest in learning to fly in real life, I enjoy and very much appreciate the challenge of learning a complex, study level aircraft.  Doing so (in my opinion) gives a much deeper appreciation for flight and adds the level of immersion we all seek from our favorite simulation based games.  In time, I’ll write a review of the Flight Sim Labs Airbus A320 and A319 and share in greater detail all the immersion I feel should be celebrated by the community.

Finally, I will also add there are still very strong opinions and attitudes expressed by many towards both Flight Sim Labs and also towards those who use their products.  I’ve expressed my opinions and my overall reasons for changing my mind and attitude.  I welcome any comments on this subject, pending they remain civil and on point.  I will not tolerate any hateful comments regardless if they are directed towards FSLabs or directed towards me. My money, my opinions, my decision, my blog site.  Thank you for understanding!