Can you believe American Truck Simulator (ATS) has been out for over two years?  If you are a fan of ATS, then you know in the vanilla state of the game you have the opportunity to drive in the US States of California, Nevada, Arizona and New Mexico.  SCS announced a few weeks ago the next State DLC will be Oregon.  I’m looking forward to the release of Oregon and I’m hopeful SCS will truly capture not only the beauty of the Beaver State, but also the unique geology, terrain and industry specifically forestry.  I’m sure the Oregon DLC will be awesome.

Just hypothetically speaking, if the Oregon DLC is released sometime between now and end of June (2018), that release will come approx. 7 months after the release of New Mexico.  Arizona came to us as a free DLC which was released in the June timeframe of 2016 and while it’s true much work has been done on ATS in the past two years including Arizona, New Mexico along with a Heavy Cargo Pack, Wheel Tuning Pack and a few paint jobs packs….the math doesn’t lie.  If SCS continues releasing state DLC packs at their current rate, we could still be a couple of years before one can drive from the left coast to the right coast.

I first blogged about the Coast to Coast map mod way back in February 2016 (over two years ago).  The Coast to Coast (C2C) map mod was the brainchild of an individual who is known as Mantrid.  He simply created C2C for his own enjoyment as he wanted to be able to drive from coast to coast in ATS and he wanted to do it in a much faster timeframe than SCS could make it happen.  Mantrid shared his idea/plan with a few folks who obviously wanted to be able to do the same thing and in the very early stages of this map.  In the very early days of the C2C map mod it included Arizona and New Mexico (which are now both officially in ATS) with a route along I-40, I-44, I-70 etc.  At that time the C2C Map Mod was very basic and scenery was pretty much a copy/paste from California and Nevada.

Over the past two years I’ve been an “on again/off again” user of the C2C map mod.  Perhaps the most recent stint of my actively using it was over 6-8 months ago.  But I had the bug to try it again and wow…what a difference a little time makes.

For those who have been active readers of my blog and also viewers of my YouTube Channel, you know I often praise the ProMods team who create freeware map mods for Euro Truck Simulator 2.  They’ve managed to create some truly awe-inspiring work which rivals the work SCS provides to us.  Just about anytime I’ve discussed the C2C project, I often tell folks that if you are thinking it is ProMods quality, you might be disappointed.  But this is slowly changing….

The most recently released version of the Coast to Coast map is 2.4.1 and is fully compatible with ATS v1.30 and is available via link on the SCS Forums.  Installing it is pretty easy.  Just download the .rar file, unzip that and locate the .scs file. Place that in your mods folder and activate.  If you are running other modded maps, you’ll want to review the loading order here.

Since the C2C Project was born it has evolved from a one-man effort into a larger team effort.   Individuals have stepped forward to assist Mantrid develop the map and turn it into what it is today.  While there may still be some areas of C2C which simply are a copy/paste from scenery in CA, NV and AZ….other areas are really starting to take shape and look/feel more like their real world counterparts.

I’m extremely impressed with what the team has done with my home state of Colorado.  Specifically Denver.  Driving around Denver, various landmarks appear where I expect to find them.  The downtown skyline includes Mile High Stadium, Elitch Gardens (amusement park) and as you proceed south on I-25 you’ll find Ikea located very near where it is in real life.  It’s really cool.

Over the weekend I installed the updated C2C map and picked up a load from Denver to Fort Worth.  It has long been my desire to be able to drive the same route in ATS that I drive when I go to visit my family in Texas.  Thanks to Mantrid and his team of very talented and skilled modders, I was able to do just that.   This includes driving I-25 south to Raton, NM then across to Clayton, NM….Dalhart, Texas….Amarillo, Texas, Wichita Falls, Texas and then into the DFW metroplex.  This exact route is included in the C2C map thanks to these talented individuals.

Leaving Colorado and headed to Texas for another load of my favorite ice cream.  (see image below)

Just about to cross the state line into Texas.  This is along highway 87 which connects from Raton, NM to Dalhart (via Texline, Texas). (see image below) 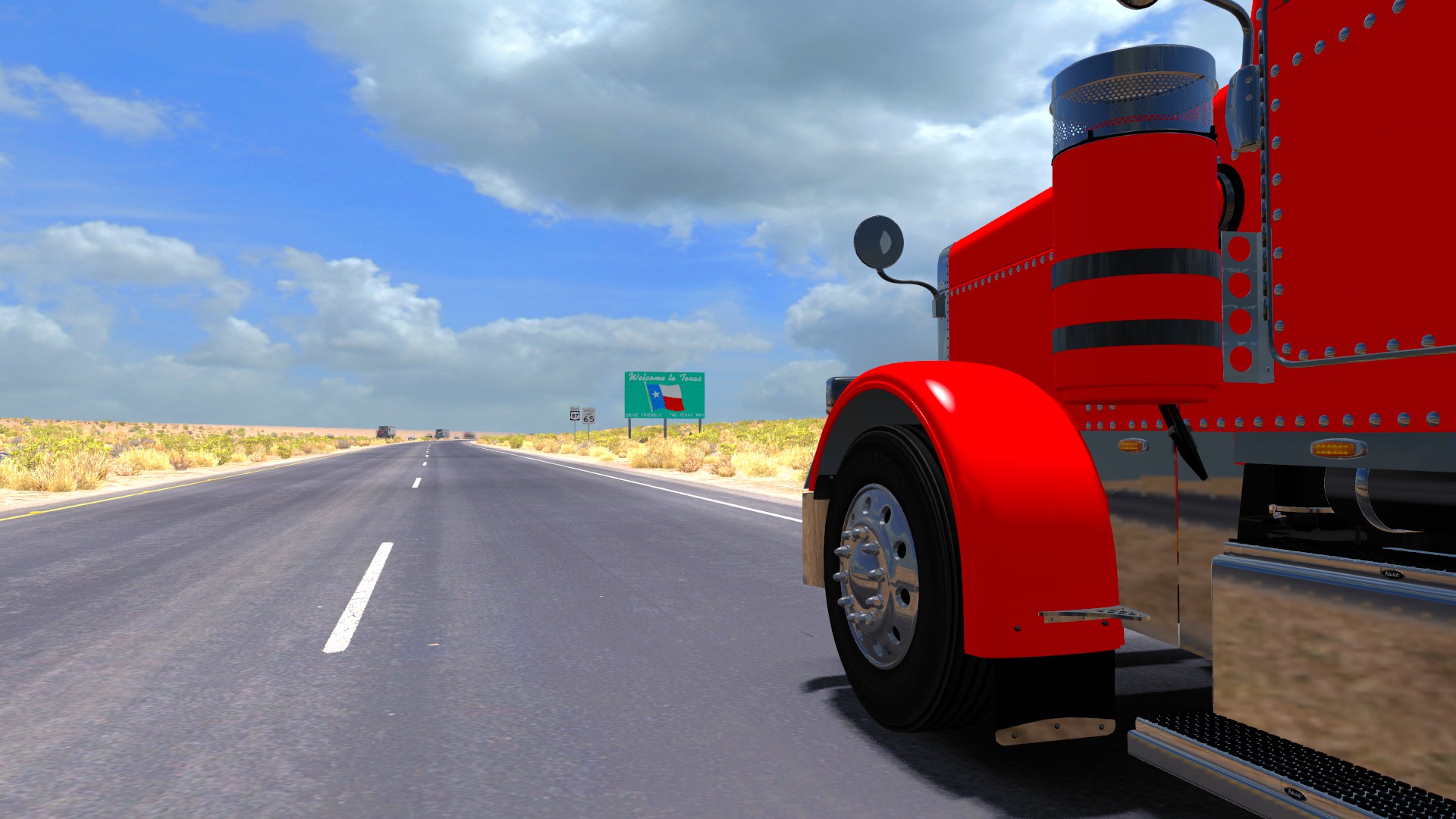 Last November my wife and I drove down to Texas to spend Thanksgiving with my family.  We stopped in this same spot for a quick picnic lunch.
I took this photo in November and posted to my Facebook page.  (see image below)

In closing, is the Coast to Coast map perfect?  No…it’s still very much a work-in-progress.  But if you really would like to get out of the CA, NV, AZ and NM area and let the hammer down, then give C2C a try.  You might be surprised.