Before I get too deep in the weeds with this blog posting, let me first start off by saying a BIG THANK YOU to every single VATSIM member.  Regardless if you are a pilot, ATC, supervisor, management, technical development team etc.  Thank YOU!  I say this because I believe the success of VATSIM is down to each and every one of US.  Regardless of how many years you’ve been a member, regardless of how many hours you have accumulated on the network and regardless of your position within the VATSIM network….VATSIM is and always will be successful because of each and every one of us.

Secondly, I do want to call out a few individuals.  These are folks I personally didn’t know until recently.  But in some way over the past 48-72 hours I’ve interacted with via Facebook, Discord or my own blog site and helped me get everything going so I could participate in the Sunday session of the Audio for VATSIM test during FSExpo19.  These individuals are: Matthew Ciafarani, Aidan Stevens, Mats Edvin Aaro and Gary Oliver.

Finally, if you missed the previous blog posting which I detailed all the issues/frustrations I experienced in attempting to get started titled “Audio for VATSIM – FSExpo Beta Bust”, then take a few minutes to bring yourself up to speed and also read the comment left by Gary Oliver.  The issues which prevented me (and several others) from joining in on the Saturday testing are explained in Gary’s comment and are all certainly understandable.  I earn my living in the IT world and yes…”Stuff” happens.  I want to once again state for the record that I didn’t write the FSExpo Beta Bust post as a way to “hate” on VATSIM.  I believe it was well received by VATSIM management and serves to document my experiences.  That’s it!

By late Saturday evening I had finished up my running around, completed the chores on the “honey do” list (guys you know this has to be a priority) and settled back in the lazy-boy with a movie in the DVD player and the wife happy.  With the help of the folks mentioned above had access to both the Audio for VATSIM (AFV) Discord server and the AFV website.  I had the updated vPilot client downloaded and pretty much everything set.

The main testing on Sunday was scheduled to begin at 1330z (7:30 AM MT).  I woke up around 6:30 and made my first stop the coffee pot.  Nothing ever really happens until I receive my first application of java in the morning.  With coffee in hand, I proceeded down to the man-cave and powered on the Beast Mark V and the other PC’s I use for flight sim.  My flight sim setup is a little more complicated as I run other applications in a networked setup to offload some of the CPU processing where I can.  Anyway, I quickly got the AFV vPilot client installed, configured and installed a brand new Southwest 737-800 livery for the event. 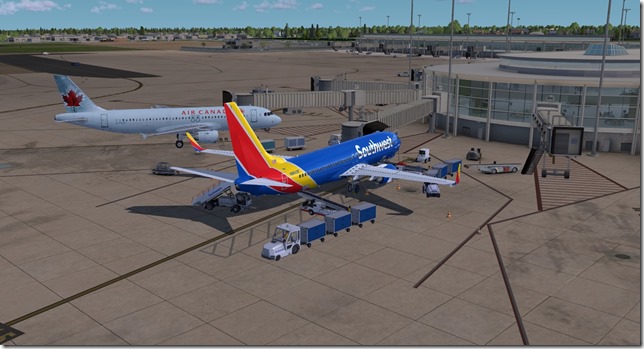 New Southwest B738 in the Heart livery.  Parked at KMSY.

I decided to fly the same flight/route which I had signed up for on Saturday.  I loaded up Prepar3D v4.5 and the PMDG 737-800 in the Southwest Airlines “Heart Livery” at the Louis Armstrong International Airport in New Orleans, Louisiana (KMSY).  While I didn’t have any ATC at time of departure, I did have company on the ground with an Air Canada Airbus at the nearby gate. 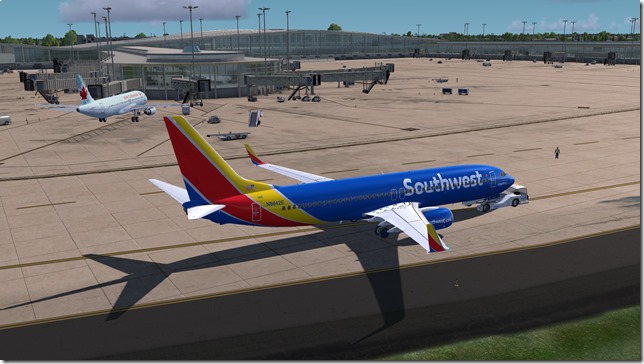 Pushback complete and ready for taxi.

I completely forgot about voice UNICOM, but went ahead and typed my intentions out via text.  It wasn’t until I got airborne that I heard another pilot speak on 122.80.  I must say, if everyone remains on their best behavior, then voice UNICOM will be awesome. 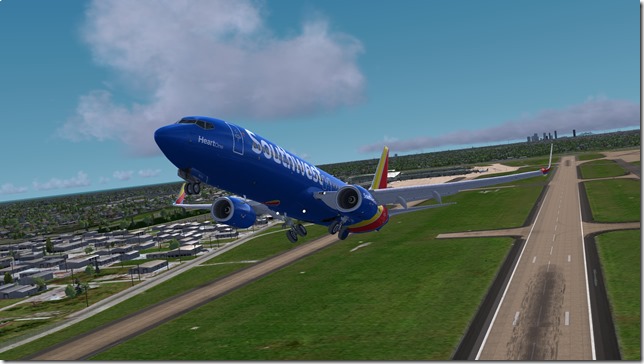 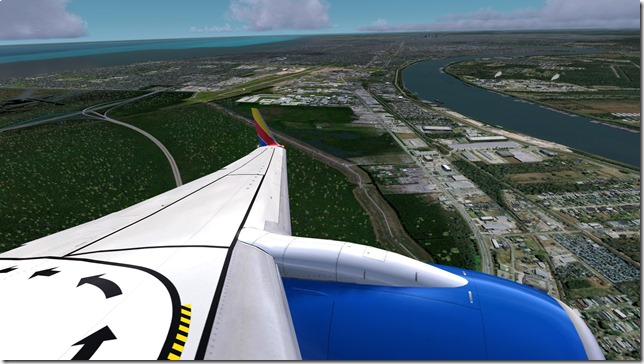 Making our left turn to join the departure route.  Mississippi river and Lake Pontchartrain in the background.

Once I reached my cruising altitude of FL350 and out over the Gulf of Mexico, I was able to tune into Atlanta Center and could hear through my own headset the new “Audio for VATSIM”.  I was blown away.

There’s more to the new Audio for VATSIM than what meets the eye EARS.  Of course the major benefit has been a long time coming and I’ll discuss more about this in a minute.  The two images below represent those who (at the time) were connected to the beta VATSIM server where the FSExpo AFV tests were being conducted.  I had just departed from KMSY (climbing through 17,000 for FL350) and you can see my audio range is represented by the red circle around my aircraft position.  These circles essentially represent our VHF transceiver range.

Upon reaching my TOC (FL350) my audio range is much greater.  With regards to voice UNICOM, I’ll only hear other pilots which fall into my VHF radio range.  Likewise, the same applies to picking up ATIS reports.  While I initially had my reservations about voice UNICOM, after more thought on the subject I believe it will be a good thing in the long run.  Yes, it will get abused…but I also know that VATSIM will hold those who abuse it accountable.

While voice UNICOM does slightly break the immersion for those who fly commercial jets, our level of immersion is also broken anytime we fly today with out constant ATC coverage.  Voice UNICOM will certainly be a major benefit to VFR flight, of which I certainly hope to do more of.

I’ll let you in on a little secret.  For the past several years I’ve actually loathed the ATIS audio.  I stopped “listening” to ATIS audio a very long time ago.  This doesn’t mean I don’t pickup ATIS info, I just preferred to either receive it via text in vPilot or grab the text info from VATSpy.  I know it’s an age thing and I know my ears are paying me back from that Van Halen concert back in the late 1980’s.  But wow…what a concert and I wouldn’t trade that experience for anything in the world.  But I digress….

Yea…my hearing isn’t what it used to be and the ATIS audio of the past was most like listening to the adults speak on Charlie Brown.  If you don’t know what I’m talking about, have a listen to this.

But I’m really pleased to say that with the new audio codec, ATIS audio is very pleasing and easy to understand.  Here’s the ATIS info from Mickey Mouse International…err, I mean Orlando International Airport.

Let your ears be the judge

I recorded a short segment of my flight once I reached Jacksonville Center airspace.  In the span of approx. 7 minutes, 30 seconds you’ll hear several audio transmissions between ATC, myself (Southwest 1066) and several other pilots.  These were all flights arriving into Orlando KMCO during the early stages of testing on Sunday morning.

What do you think?

While there was one pilot with much lower audio levels than anyone else, I could still make out what he was saying.  I believe once the new Audio for VATSIM becomes the new normal and everyone has a chance to adjust their audio levels, this new system will truly enhance all the wonderful things about flying in a multiplayer ATC environment.

For me, this is the very best thing to happen to VATSIM in its (and my) 18 year history.  While I’ve been amazed at what my eyes have witnessed over the years, the lack of a truly powerful and supportive audio system has been been a major let down.  The team responsible for developing and bringing the new Audio for VATSIM into reality deserve very accolade we can give them.  Audio for VATSIM will propel the VATSIM network well into the future and beyond.

The Million Dollar Question!  When?

As we know, the testing which took place this past weekend during FSExpo19 was not the only testing held for the new audio system.  However, this weekends event was by far the largest.  From both what my ears experienced as well as what I’ve read on their Discord channel…I don’t think we’re very far away from having AFV into full production.  However, at this particular time there have been no firm announcements.  We can only speculate if we’re just days/weeks away, more than a month or ????  I have a feeling we’re closer than we might think.

Well, that just about brings this posting to a close.  I will have a few blog posting updates this week (pending I find the time to write them).  I plan to document my thoughts on a few newsworthy items of recent and will be digging through all the info I can find on product news from FSExpo19.