Since the last update from a few weeks ago, I’ve made even more progress in my overall expansion plans.  I did go ahead and purchase the Boeing 747-400 for heavier and longer cargo operations.  In doing this, I also decided to sell off all the King Air aircraft.  I was able to keep all the current pilots, train them onto different aircraft between the remaining Connie’s, B738’s and B757’s.  The fleet now consists of three Connie’s, four 738’s, two 757’s and the one 744.  I keep the Connie’s based at KAPA along with two B738’s.  The remaining two B738’s, two B757’s and the Queen are based at KDEN.  While technically the runway at KAPA is long enough for the B744 to land (based on Air Hauler 2 specifications), living just about 5 miles and on the approach path of the 17’s, I would be surprised if I ever were to see a 747 going into KAPA.  Of course I would also be just as surprised to witness a 737 landing there as well.  But sometimes reality just needs to give way to imagination.

I opened a new base at KDEN and eventually closed the base and factory at Colorado Springs KCOS.  While I believe the long-range plan will certainly support additional bases, I want to just focus on two at this time.  Keeping KAPA and KDEN made more sense than KDEN/KCOS.  With the factory operations I need to move materials between the two factories.  While I can do that via my own aircraft, I find just contracting this function to ground transportation is my better option.   The KAPA/KDEN combination has saved money in these ground transport fees and also shortened the amount of time it takes to move materials between the two factories as well.  The combined factories work to produce materials to make cell phones.  The current production rate of cell phones is 2000 per day which brings in approx. 1 million per day.

Financially speaking, with the current setup the monthly overhead is just under 30 million dollars.  This includes the rent at both KAPA and KDEN along with the lease and insurance payments for our fleet of ten aircraft and salaries of our twenty pilots.  We currently have 65 million in the bank with no outstanding debt. 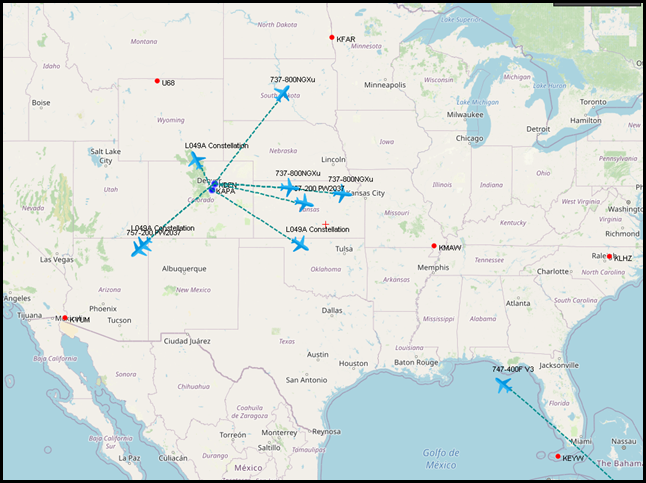 I think the next step I would like to take is to replace the slower Connie’s with B738’s.  The Connie’s have certainly been useful, but their speed and cargo capabilities are somewhat limiting.  The 738 can still fly into smaller airports, but transport twice as much cargo in much less time.  After all…time is money!  Of course, I want to take the same approach as I did with replacing the King Air’s and that is to train those current Connie pilots up to the B738 which will take some time.

As I mentioned in a previous update, I’m playing this in the role of CEO and not actually flying the routes myself (as is possible).  I’m about 45 days in and still enjoying the strategy of it all.  I’m sure at some point I will grow bored with it.  Unfortunately Air Hauler 2 doesn’t have a pause feature.  As an example, if I simply stop playing for a month or two and then relaunch the application, I will most likely find my cargo company bankrupt as the monthly lease, rent and salary payments will continue to be paid out.  To prevent this from happening I would need to essentially sell off any assets, turn in any leased aircraft, fire pilots and close down bases/factories.  But for now, I still enjoy spending an hour or so each day just planning out flights and ensuring enough revenue is coming in to keep the forward momentum going.