I may have previously pointed out that some legs on this tour will be 100% fictional.  Meaning, in the real world there are no known flights connecting the two cities or airports together.  In addition, the airline I choose to simulate may also not officially serve either of the two airports, but the airlines will be from the region as best as I can setup.  For me, the hobby of flight simulation has always been more than just flying.  If one chooses, there’s a lot more to be learned from completing world tours like this and I’m very much enjoying performing the research in finding which carriers are flying in these areas and the history and information regarding the surrounding areas.  It is my desire that as you come along for the ride, that you may also learn something new from these writings.  Thank you for taking the time to read. 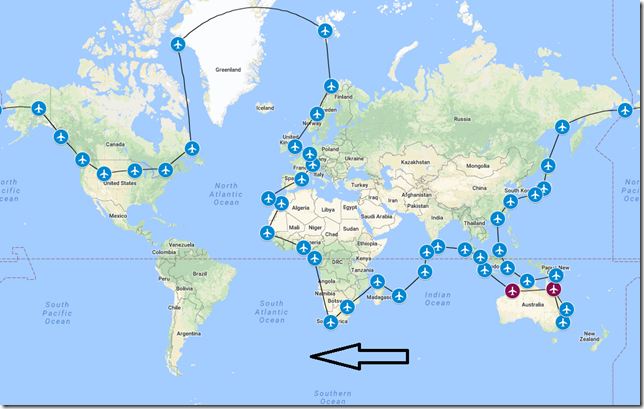 An updated version of our tour map showing Broome as visited.

Jabodetabek or Greater Jakarta is an official and administrative definition of the urban area surrounding the Indonesia capital city of Jakarta. Jakarta is the largest city of Indonesia and is located on the northwest coast of the world’s most populous island of Java. The island of Java is comparable in size to England and the US State of North Carolina. The Greater Jakarta metro area (again known as Jabodetabek) is the second largest urban area in the world after Tokyo with a population of over 30 million. Established in the 4th century, the city became an important trading port for the Sunda Kingdom and was the de facto capital of the Dutch East Indies.

Soekarno-Hatta International Airport (WIII) is the primary airport serving the Greater Jakarta area on the island of Java in Indonesia. Named after the first president and vice-president of Indonesia and is located 20 km northwest of central Jakarta. WIII is the busiest, largest airport in South East Asia, the busiest in the southern hemisphere and one of the busiest (ranked 8th) airports in the world.

I thought it only fitting since we arrived into Broome on Tiger Air, we would fly out on Lion Air. Lion Air is one of many Indonesian low-cost airlines. Based in Jakarta, Lion Air is the largest privately operated airline and the second largest low-cost carrier in all of Southeast Asia after AirAsia. Lion Air operates domestic and international routes connecting Indonesia to Singapore, Philippines, Malaysia, Thailand, India, Saudia Arabia and Australia. Established in 1999, Lion Air have acquired over 100 aircraft with approx. 250 more on order.

Lion Air currently owns/operates 70 Boeing 737-900ER and was Boeing’s launch customer for this aircraft variant. The livery we will be using for our flight today is in celebration of the 100th 737-900ER built aircraft. 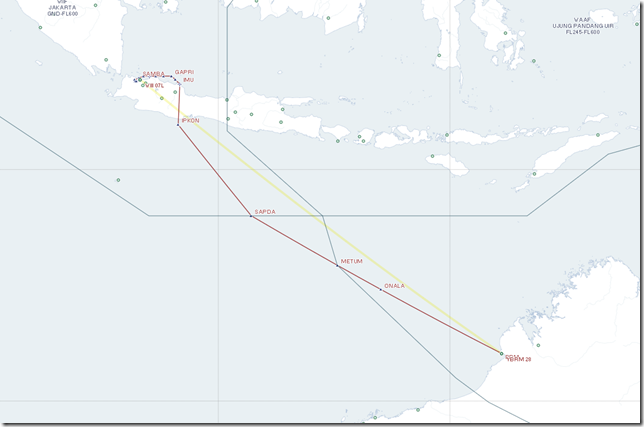 After several days of exploring Broome and the northwestern portion of Australia, it’s time for our travelers to depart Australia and head northwest to Jakarta, Indonesia.  We’ve arranged to shuttle a Boeing 737-900 which belongs to Lion Air back to Jakarta.  Our passengers find it funny that they arrived into Broom on a Tiger, and leaving out on a Lion.  Once again we’re boarding from the tarmac as our passengers are being bussed in direct from their hotel to the airport. 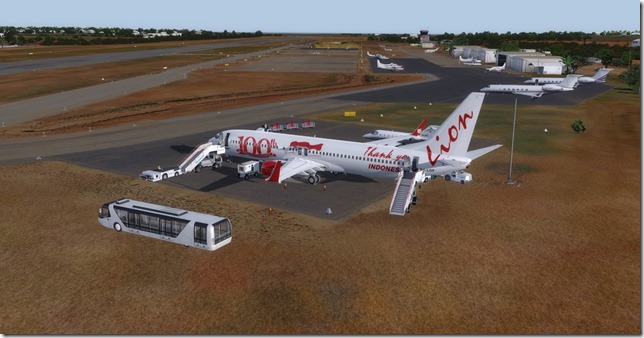 All buttoned up and ready to go.  Not sure who owns the small learjet parked next to us.  But it must be someone famous or popular as we’ve been asked to depart as quickly as possible so they can escort the famous passenger to his awaiting jet. 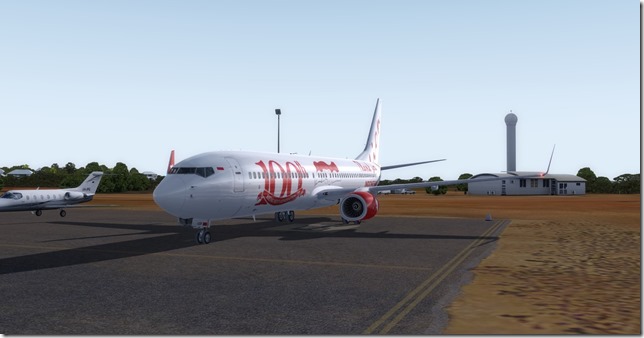 Departing out runway 28.  This will be the last payware scenery we’ll have for a while.  It sure is beautiful here and I’m sure to return soon. 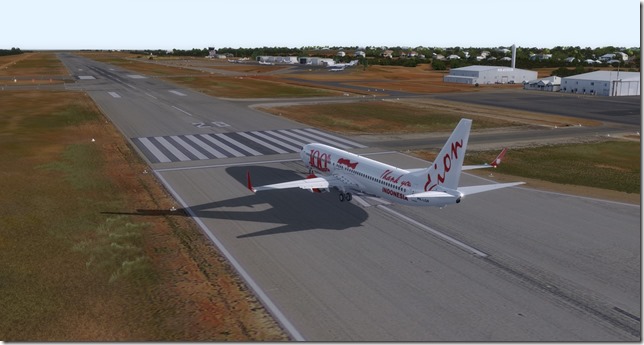 While the textures on the Lion livery lack a bit to be desired, the beauty of the Broom airport and Australia ground textures certainly make up for it.  Not to mention the immersion effects. 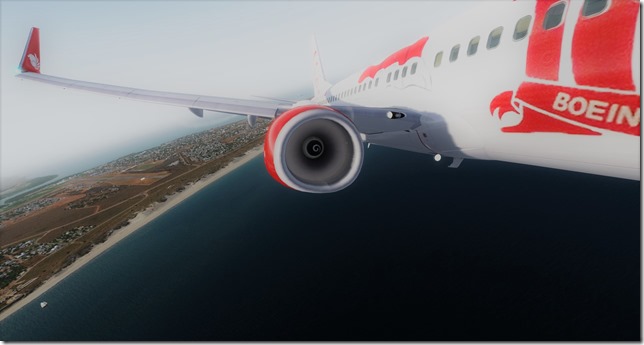 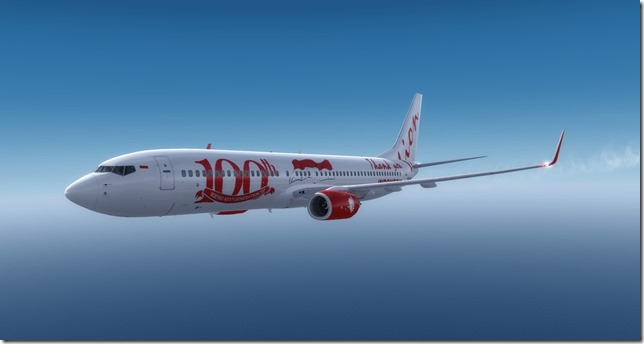 As we begin our descent into the greater Jakarta area, the clouds are starting to build. 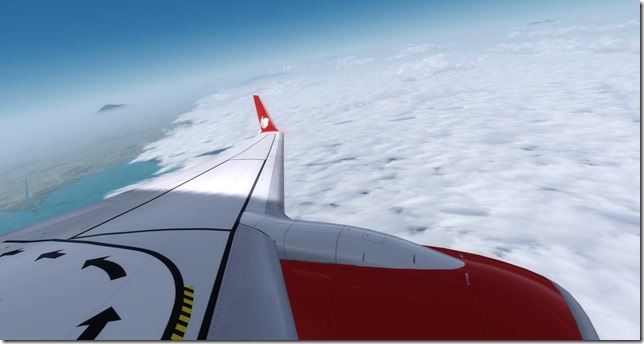 While Jakarta is still in the southern hemisphere, I don’t think the weather and climate will be the same as our travelers experienced in Australia. 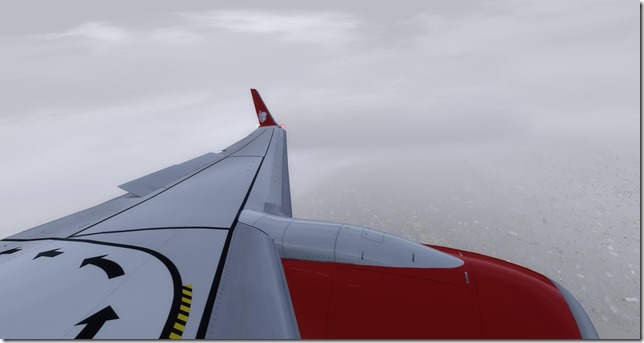 Fully configured for landing and on very short final, I’m sure the runway is down there.  Can you say “Hot Sticky Mess”? 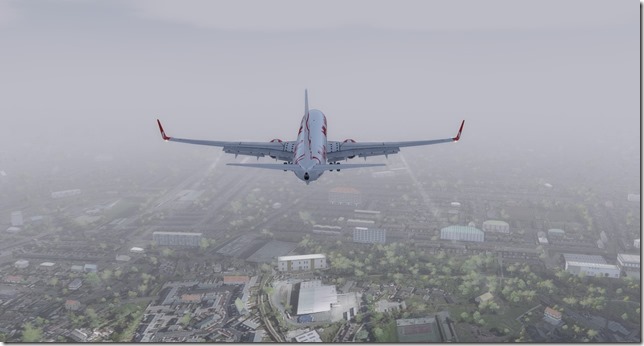 Finally the runway lights appear through the hot, humid air. 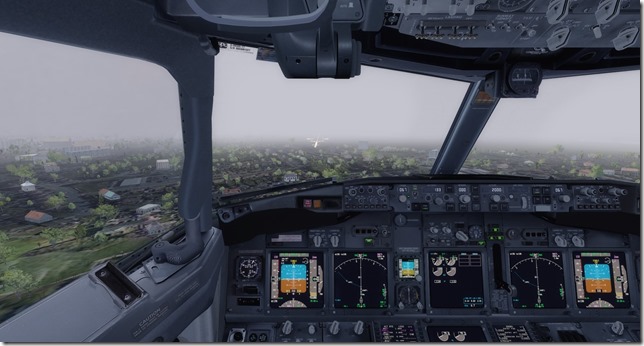 Our Lion Air Boeing 739 is safely parked at the gate.  As we open the aircraft door we’re immediately hit with that warm, humid air.  Welcome to Jakarta! 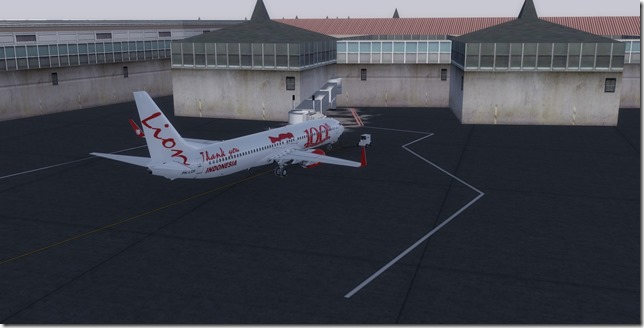 Thank you for taking the time to read this report.  Our next flight will depart Jakarta, Indonesia and we’ll head north of the equator to Singapore.  Also, as promised…out next two flight legs will feature the Boeing 777 and Boeing 787 (Dreamliner).