It’s been 10 days since the covers were battened down on the new GBS Beast v5 (my new gaming PC) and I couldn’t be happier with how she’s been performing.  All the simulation based games I truly love and enjoy playing perform flawlessly.  Since v5 first booted up with a brand new install of Windows 10, I’ve been feverishly getting everything reinstalled, configured and operational.  I’ve managed to resume (and almost catch up) with getting videos recorded for the GrizzlyBearSims YouTube Channel.  For me, my simulation gaming is a huge stress reliever for me from the hectic days of real life and I feel that life and my sanity are back to normal, or as close to normal as can be expected in my life.  I’m very pleased.

Much of the time I spent with v5 in the first few days could have been considered baby steps.  As previously noted, I spent some time playing FS17 and recording content for the YT channel.  I also began the daunting task of getting all my flight sim add-ons reinstalled and configured.  In addition, spending time getting Prepar3D v4 dialed in with the new system.  While P3D v4 is not new to me, the configuration settings with the new performance hardware is drastically different that how I had it setup with the previous gaming machine.  But thankfully, the new hardware in the Beast v5 is allowing me to really crank up the graphic settings and both the GPU and CPU are working well together to deliver a spectacular visual experience which I couldn’t be happier about.  But with almost 10 days of taking it easy on the new machine, I felt the need to really stress her and see just what she could do.

As my long-time readers will know, I’ve been a flight simmer for a very long time.  Quite honestly, it’s because of my passion for virtual flight which served as the requirements for the new PC build.   I could have saved a lot of money if I were only building the new rig to play FS17, ETS2, ATS etc.  But to achieve the stunning levels of immersion and eye-candy I wanted from Prepar3D v4, I needed the CPU/GPU and other elements.  But how would this new system perform.  Would it, could it deliver the level of performance I really hoped it could.  I new of only one way to test this and it would involve pretty much an entire day of my time.  Of course, time spent gaming is never a waste of time.  Right???

Now, I must admit that I rarely have the time or real desire/interest to commit to a full international long-haul flight in the sim.  In my earlier years, spending a full day flying from the US to the UK was something I did quite frequently.  But as one begins to settle down and all that…then sacrifices must be made and for the most part my virtual flying generally consists of shorter haul flights in the 2-4 hour range.  Also, until the GBS v5 was born….I had difficulties getting the type of performance that would allow a full international long-haul flight without a system crash or really slow performance at the very end.  I had hoped this new rig would solve those issues and let me say once again, I couldn’t be happier.

On Saturday, I booted up GBS v5 and loaded up Prepar3d v4.2 with the PMDG 747-400 (Queen of the Skies II) and placed her at the gate at KDEN (Denver International Airport).  I set the sim time for just before 1900 hours and began to perform all my pre-flight setup work to ensure a prompt departure for 19:35.  I would be simulating British Airways flight 218 which operates daily between Denver and London’s Heathrow Airport.  This is the very flight my wife and I will take in a few months.  While in the past BA operated the Boeing 777-200 on this route, for the past few years they have operated the Boeing 747-400.  The Queen of the Skies won’t be around many more years and it’s truly a joy to have the opportunity fly on this wonderful aircraft.

The real life flight time for this route is approx. 8 hours, 35 minutes and I’ll be doing my best to simulate this down to the very minute.  After all, “As Real As It Gets” right?

Unfortunately, the first few screenshots which I captured while on the ground, pushback, taxi and take-off didn’t get saved.  But despite one family being a bit late arriving to the gate, Speedbird 218 Heavy pushed back at 19:36 and began the short taxi to runway 36R. 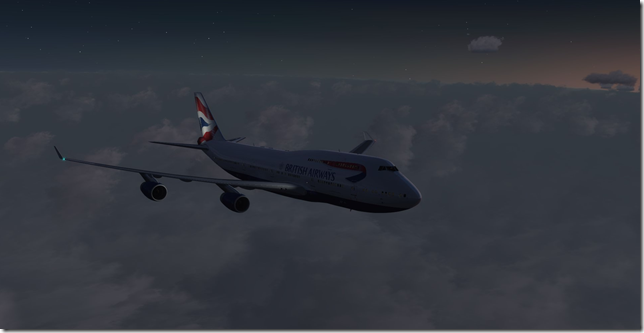 Speedbird 218 Heavy climbing through the clouds just as the final minutes of sunlight was visible to the west.  The four Rolls-Royce RB211 engines provide all the thrust we need to reach our cruising altitude of 37,000. 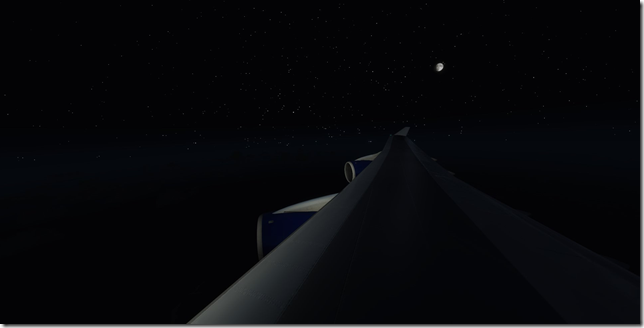 A near full moon is visible just off the starboard side of the aircraft.  Wing shots are some of my favorite to capture. 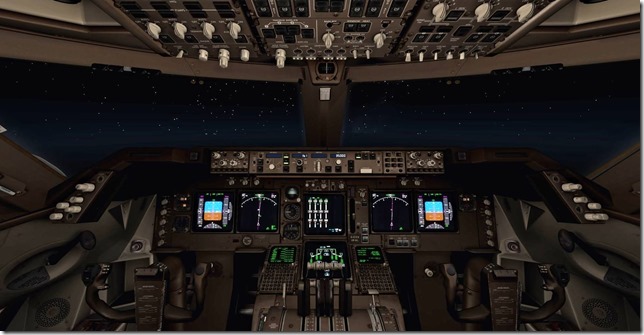 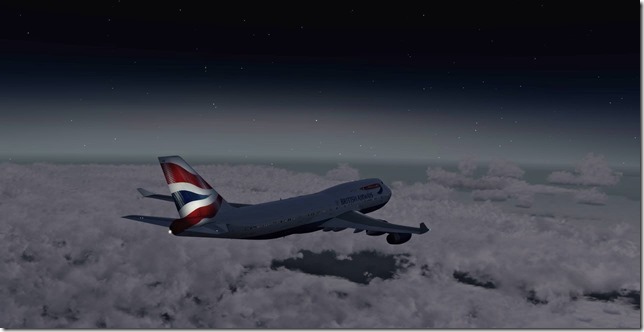 Here comes the sun.  The sun rising in the east, but we still have many hours to go. 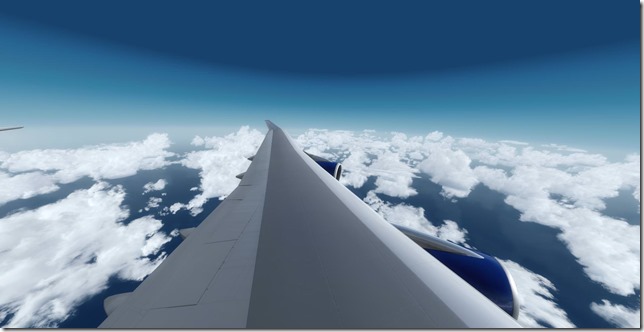 A port side wing view.  PMDG simulates wing flex very well with their aircraft.  It’s truly amazing just how much flex these large wings have. 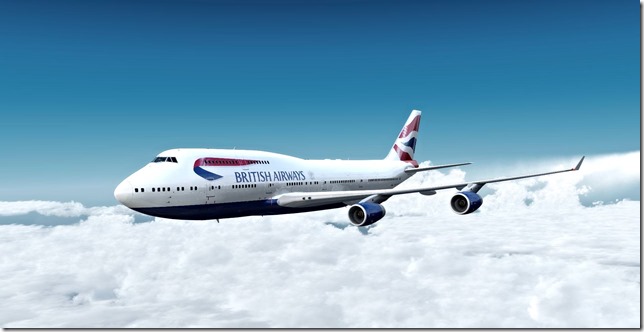 The Queen of the Skies is a thing of beauty.  Note the heavy cloud cover over the Atlantic ocean.  Not much to see. 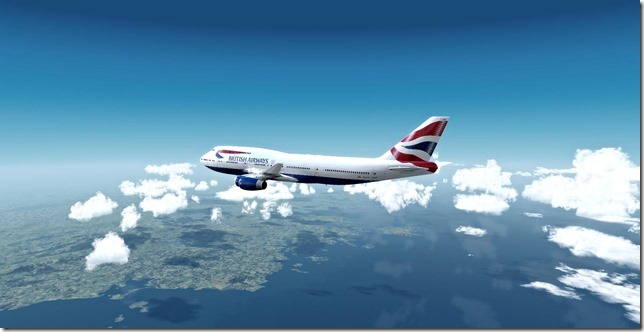 Land Ho….just approaching the cost of Northern Ireland.  Almost time to get to work getting this bird safely on the ground. 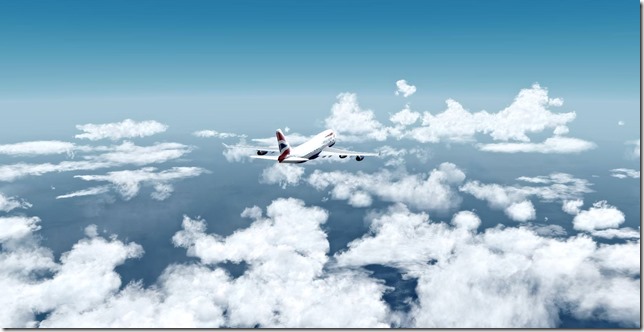 One more body of water to cross before reaching the coast of England.  At this stage of the flight we’re beginning our descent from FL370 and experiencing a lot of turbulence. 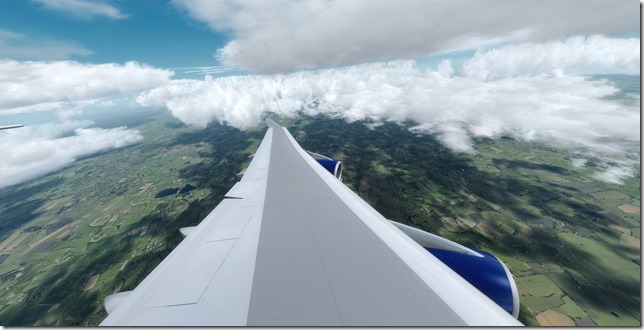 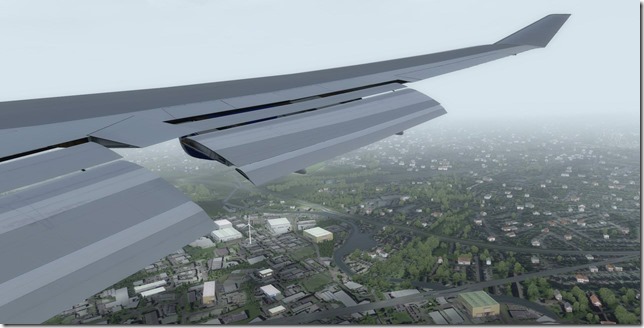 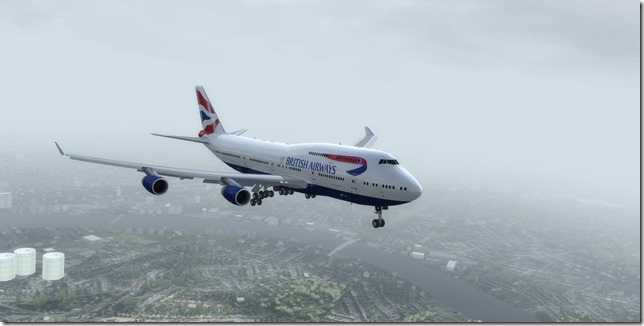 Gear down and fully configured for landing.  Speedbird 218 Heavy is joining the ILS for runway 27R.  The Thames River is visible in the background. 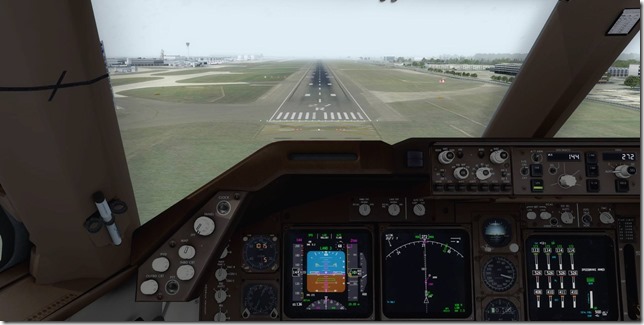 Cleared for landing on 27R and just seconds before this shot the end of the runway was in full sight.

The total flight time from push back at KDEN to engine shut down at EGLL, was just a little over 8 hours, 45 minutes.  So about 10 minutes late, but this was mainly due to heavy traffic as we entered the busy London airspace.  But the GBS Beast v5 performed just as expected during this entire time.

This long flight pushed the new machine hard.  Night time, heavy cloud cover and flying from and to heavy detailed airports were all tasks which would have been difficult with the old PC.  It handled it all with flying colors (pun intended).  I’m going to spend a few weeks flying some European routes before eventually heading back to Denver.

Before I get started detailing part two, I just wanted to mention the Heathrow scenery is UK2000 Scenery.  They develop add-on scenery for both FSX and FS9.  It runs fairly well on my machine and since I enjoy flying to Heathrow, I wanted to update it from the way it looks in FSX default (which doesn’t include the new T5).

Part two of our journey takes place a few hours after we landed at Heathrow.  You can read about the Denver to London Heathrow flight in Part 1. As also mentioned in part 1, this is a real world trip my wife and I are taking to visit her family in Belgium.

We made the 90 minute journey across London from Heathrow to London City Airport (EGLC).  London City Airport is a small airport practically in the center of London and right on the banks of the Thames River.  The airport services mostly other European destinations, but British Airways does operate a daily flight from EGLC to KJFK via a stop in Ireland.  It is a fun airport to fly into both in real life and in FS Life.  Please join me in this adventure as we depart EGLC for Antwerp, Belgium EBAW.

Our flight today will be in the CityJet, Fokker 50.  I don’t get the chance to fly a lot of turboprop aircraft, nor do I get the opportunity to fly in them in real life.  One of my favorite commercial turboprops used to be the Saab 340B which American Eagle once operated.  I would take one of those when I flew from Dallas/Ft. Worth down to Killeen, Texas.  Now American Eagle uses the ERJ’s for that route and has retired all the Saab 340B’s from their fleet.  Anyway….the Fokker 50 is a sweet aircraft for FSX.  I do need to upgrade the panel for it and that’s why you won’t see any short final shots from the cockpit window in this adventure.

Rubens 100, holding short runway 28 (as depicted in FSX) waiting for the Air France to depart.  Runway 28 is (actually runway 27 in real life) is a short 4,984 feet and again right in the heart of London’s Financial District (the Wall Street of London) and buildings all around.  We’ll need to let the props wind up prior to releasing the brake just for good measure.

Airborne, now let the bumpy ride begin.  While this Fokker 50 needs to have a new panel installed, the ride characteristics are very good.  She rocks and rolls just as the real Fokker 50 does.  The rain in London has stopped, but the clouds are still hanging around and we have a light chop.  I expect the chop to get worse before it gets better.

Bye-Bye London.  See you in a few weeks.

Ladies and Gentlemen, we apologize for the rough flight.  We just cross Dover and are headed across the English Channel.  That is France just off the starboard side.

Approaching the city of Antwerp, Belgium.  Antwerp is depicted surprisingly well in FSX.  The river Scheldt is visible winding through the city.  Antwerp is a very beautiful city and I enjoy visiting there every chance I can.  The Antwerp Airport (EBAW) is just ahead, turning for the downwind leg approach.

A short final shot (runway 29) from outside (sorry Al), just in the general direction off the right wing (less than 1 mile) is where my Mother and Father-in-law live.  I can sit in their garden and hear the aircraft wind up their engines and props.  We’re almost there.  By the way, EBAW has a slightly shorter runway (by 30 feet) than EGLC.  Landing and departing is less daunting with the lack of buildings and the obvious close proximity to the River Thames.  It’s still a fun runway to land and depart from.

Parked at EBAW.  Again, surprisingly EBAW is depicted very well.  I’ve yet to find an add-on scenery for this airport.  But I think FSX does a good job.

Well…I’ve simulated half of our real-world journey my wife and I will take in the next few weeks.  It is time to head over to my Mother and Father-in-Laws house, get a shower and then walk to the Frituur Shop for some incredible Belgian Fries called frites (like french fries, but without the french).  I don’t know the history of the friend potato, but the French have nothing on the Belgians and US?  Ha….nothing compares.  Also, Belgians don’t eat their fries with ketchup…it is mayonnaise all the way.  I will also enjoy a few curry worst sausages called frikandel in Dutch.  Ain’t nothing healthy about this dinner…it’s all about the reward after having been awake for over 30+ hours.

I don’t think I’ll document the return trip and will let this part 2 be the final chapter.  I will of course simulate the return flight from EBAW to EGLC and then EGLL back to KDEN.  But I’ll leave it up to your imagination how that trip goes.  Right now my mind and my stomach is thinking Belgium and that’s where I’ll leave it.

Until next time, Happy Flying!