The Eagle has landed…the good ole, and reliable United States Postal Service (USPS) “We Deliver” did their job just as the tracking number I received indicated and delivered my CSIO’s SKRS Eaton Fuller Style USB Shifter on Saturday.  You may remember from a piece I wrote in April that I backed their Kickstarter program and as part of being an official backer would receive a shifter sometime in May.  I’ll admit, the wait has had elements of my childhood in the days leading up to Christmas and wondering what would be under the tree when I awoke on Christmas morning.  Ahhhhhhh  Ok…let me get back to reality now.

If you’ve had your head buried in the sand over the past several months AND not been paying attention to the recent ATS and ETS2 trucking news, then perhaps you’re completely out of the loop regarding what a CSIO SKRS Eaton Fuller Style USB Shifter is, what it does, how you can get one and most importantly IF and WHY you should own one for yourself.  Well…I’m going to break these things down for you in what I hope will be an easy to understand read.  Here goes….

What is this thing?

The CSIO SKRS Eaton Fuller Style USB Shifter started out as an idea (and a rather good one at that) by the CSIO Technologies team.  These guys wanted to bring to market a piece of hardware which would truly place us behind the wheel, or better yet behind the gear shift of a semi truck.  And remarkably they did just that!  But trust in the fact they just didn’t crank out a replica shifter from a 3D printer.  Oh heck no!  These guys have used the genuine article.  The shifter housing is 100% the real deal and what you would find if you crawled into the cab of a semi running an 18 speed Eaton Fuller transmission.  Sounds easy right?

Unfortunately for us simmers, the real deal found in a semi truck uses pneumatic hoses and not electric cables.  So the talented folks at CSIO Technologies designed a small USB interface which would be fully contained inside the shifter housing.  Their goal was to provide us something we’d all be proud to own and use and they certainly got this right!

The CSIO SKRS shifter mounts snugly and securely onto a Logitech G25/G27/G29 or Thrustmaster TH8RS/TH8A shifter.  One small USB cable (provided) then connects into an available USB port on your PC and after making a few changes in either ATS or ETS2, you’ll soon find yourself manually shifting gears in the big rig of your choice as you truck down the open highway.

My style of simulation game play has always been to enhance it as much as possible.  I have hundreds of dollars invested in hardware to enhance my flight simulation experience.  When flying the PMDG 737 or 777, I almost rarely need to use the keyboard and mouse.  I have hardware modules to control my NAV and COM radios, I have hardware modules to control the autopilot and flight navigation systems and of course I use a flight yoke and rudder pedals.  Likewise, I have the Logitech G27 wheel, pedals and shifter to enhance my “Realism through Simulation” efforts with American Truck Simulator, Euro Truck Simulator 2 and Farming Simulator 15.  Driving or flying using only mouse and keyboard is just simply not an option for  me.  Each of the games I play are SIMULATORS.  So having said that, it’s no wonder I would find the CSIO SKRS shifter a must have for my setup.

While it’s been a long time since I held a Class A CDL (issued in the Great State of Texas), the CSIO SKRS Eaton Fuller Style USB Shifter felt comfortable in my hand.  Of course it should.  As previously stated…this is the real deal!  But I must almost admit that I pretty much drove my ATS and ETS2 trucks with automatic transmissions.  The reason for this was because I just found the process of shifting gears (especially simulating an 18 speed transmission) to be un-natural.  I tried setting up buttons on my G27 shifter to emulate the high/low and splitter functionality.  But it just didn’t feel right.  So I gave up and returned my truck to an automatic transmission.

In the coming weeks (perhaps month or so) the initial setup will be much easier and actually almost plug and play.  SCS has officially backed the shifter and have plans to add the necessary adaptions to make the setup easier.  Until this happens, you will need to make a few edits to the profile controls.sii files.  But everything is explained in the very well produced CSIO YouTube videos found here.  The changes required on my system mirrored 100% of what was discussed in the video and everything functioned as described.

As you can see from the image below, I’ve installed the shifter onto my Logitech G27 shifter as described.  I spent about two hours over the weekend driving in ATS multiplayer both learning the correct shifting methods and having a lot of fun.  As those of us who already use a wheel, pedals and shifter setup know just how much these items immerse us into the simulation….this shifter knob takes it even higher.  Yes absolutely, you can enjoy ATS or even ETS2 just using a mouse and keyboard.  You can improve on that slightly by using a game controller such as an XBox type controller.  But throw this CSIO SKRS Eaton Fuller Style USB Shifter onto a Logitech shifter (with wheel and pedals) and just about the only thing missing is that sweet smell of diesel exhaust.  In other words, this setup takes ATS from being a video game into a hard core American Truck SIMULATOR. 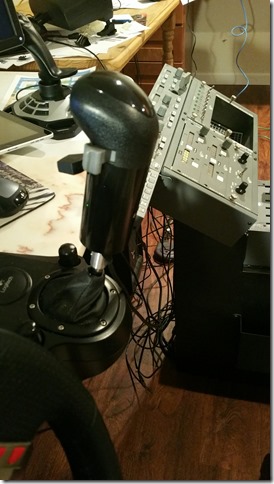 Unfortunately, I realized I would need to change my setup just slightly in time.  I’ve got to get rid of the rolling chair I currently use or place a carpet under it.  Trying to stay coordinated while using clutch, brake, accelerator (plus shifting gears) all while trying to keep my chair from rolling backwards is a real pain.  Not to mention it seriously breaks my sense of realism.  The other thing is I plan to mount the Logitech shifter on a lower table or platform of some kind so my shifter is a little lower than it currently is.  Mounting this at the same height as the steering wheel makes the overall height of the knob much higher than the default shifter knob and I’d rather it be just a little lower.

Heck yea…Especially if you already have either the Logitech or Thrustmaster hardware.  This will allow you to take the simulation to the next level.  This is truly an awesome hardware addition and I’m happy to have had the opportunity to back such an amazing product.  I can’t wait to learn what other items the CSIO team will come up with next.  As a matter of fact, the CSIO.tech team posted a new YouTube video showing an EasyJake addon for the SKRS.   Yes Please!!!!!

As always thank you for reading my blog.  You can follow me on Twitter and also check out my mature virtual trucking company, Grizzly Bear Trucking.  We pride ourselves in realistic simulation operations on multiplayer and single player.  We are a relaxed group of enthusiasts who enjoy following the rules of the open road and would welcome others who share this same desire.

What does 940551169900056091xxxx mean?  No, it’s not an international telephone number.  No, it’s not the winning lottery numbers (close) and no, it’s not my IQ.  That number is the United States Parcel Service Priority Mail tracking number for my Eaton Fuller style USB shift knob which I backed in the CSIO Kickstarter campaign last month.  The reason why this number is close to being a winning lottery number is the fact that the package is due to arrive at my residence tomorrow (Saturday, 21 May).  Woohoo…. 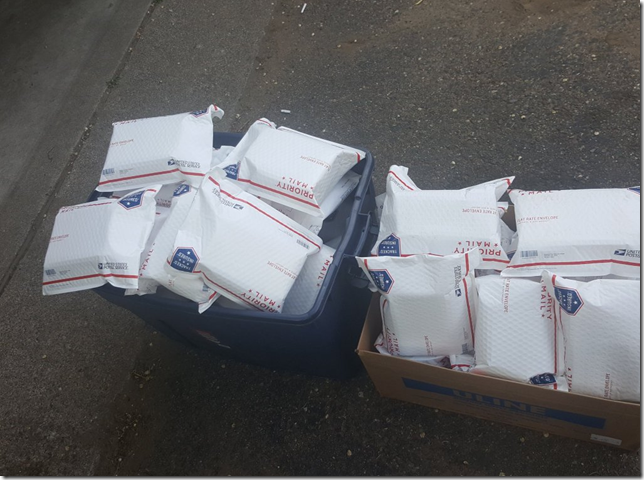 I received the shipping notice and the CSIO folks posted the above picture on Twitter with the tweet reading “Last of the @Kickstarter s going out right now!”  Yep, one of those USPS Priority Mail packages will find its way to my home in Denver on Saturday (hopefully).

I’ve see a few of the famous (and some not so famous) YouTube folks demo and showcase their shifter knob in recent days.  From what I’ve seen, the shifter will most certainly live up to my expectation.  You can expect a full review of the shifter sometime next week right here on GrizzlyBearSims Planes, Trains and Automobiles (and Farming Too!) Realism through Simulation blog.

If you can’t find it, grind it!