How to install Mods in Farming Simulator 15

I’m going to write a series of mod reviews for Farming Simulator 15.  While I would almost imagine everyone already fully understands how to install mods in Farming Simulator 15, I figure I’ll just go ahead and quickly write this for anyone that may be confused.

First, if you are playing Farming Simulator 15 on a console platform, then you should already know that mods are not supported.  So this “how to”, as well as the mod reviews will basically be for PC users.  I’m sure there are many reasons to own and play “some” games on the console platform…but FS15 really isn’t one of them.

1.  Self-contained Executable File – While perhaps not as common as the .zip format (described below) many mods do come in a self-contained .exe file format.  Like any other application, you just double-click to launch the .exe.  It will automagically detect where your Farming Simulator 2015 is installed (Documents > My Games > Mods)  and add the mod.  Word of caution, if you use the Mod Commander mod to manage and keep your mods separated based on map, then you’ll need to move the mod (once installed) into the appropriate map directory.

2.  ZIP Format (Most Common)  – Depending on the map I’m playing, the number of mods I run can be anywhere from just a few to a dozen or more.  The most common form of mod I run across is the .zip format.  Depending on what the mod is and how complex and large it is, you may need to open the .zip file and extract a portion of it before adding it to your mods directory.  However, in most cases…the .zip file will be ready to just copy into the mods folder.  But how can you tell?

If the mod developer is smart, he will name the .zip file which needs to be uncompressed something like “UNZIPME_ChoppedStraw_15_0_05.zip”.  This should immediately tell anyone that the contents in this .zip file first needs to be extracted.   In this example, you can see from the image below the .zip file contains a compressed .zip file named ZZZ_ChoppedStraw.zip along with several .txt files.  One smartly named “README.txt”.  This file is name this way because….well….YOU SHOULD READ IT!!!  What you need to know will be explained in that .txt file.  Funny how that works huh? 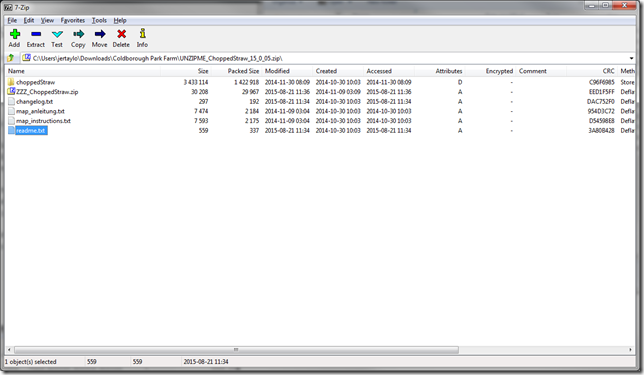 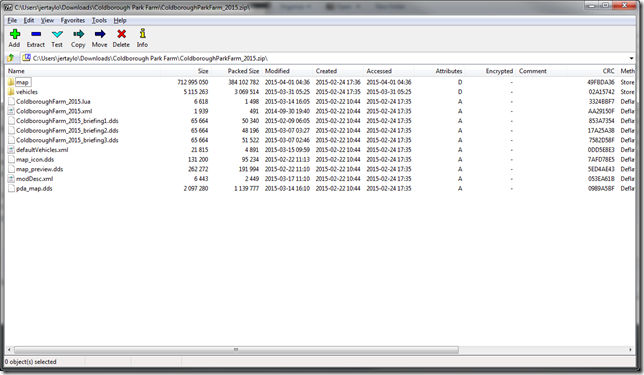 3.  RAR Compressed File (Least Common) – Of the compressed file formats, the RAR compressed file is the least common.   These will always need to be uncompressed to reveal the enclosed .exe or .zip files stored inside.

A quick note about archival/compression utilities.  I use and recommend 7Zip.  7Zip will unpack RAR files and also compress and decompress .zip files.  It works extremely well and is free.  WinRAR is also available for those who prefer that utility.

Again, I’m almost certain that anyone playing the PC version of Farming Simulator 15 will already know this information.  If this has helped you, then it was worth my time in writing the piece.

I know some have been anxiously awaiting the next version of Farming Simulator from sometime shortly after FS2015 was released in the fall of 2014.  As a matter of fact, I began seeing postings in the forums asking this very question within only months after the release.  Yea, it’s safe to say that Giants Software really has a hit on their hands with this franchise.  I would even go as far to say the popularity and success of Farming Simulator very closely rivals that of what Microsoft had with Flight Simulator.  Time will only tell if Giants repeats the mistakes Microsoft made.  But that is a different story for a different article.

Am I looking forward to the new version?  You betcha!  Farming Simulator 15 was really my first experience with a simulation style game that WASN’T Flight Sim based.  So this will be my first experience with making the transition from an older version to a new version and all the pains that may be part of that process.  Like in the example of Flight Sim, when moving from Microsoft FS9 to FSX, nothing really worked initially.  It took some time for the add-on community to begin to make the transition and I’m sure the same will apply for Farming Simulator.  I wouldn’t necessarily expect many of the FS2015 mods to immediately work in FS2017.  I suppose DLC might be a different story.  But then again, I’m really not sure.  The only FS15 DLC I currently own is the JCB pack.  But I find it somewhat interesting that we are perhaps less than 6 months away from the release of FS2017 and Giants is taking pre-order purchases for their Holmer DLC.  Will the Holmer DLC purchased in March 2016 be usable in FS2017 when it is released later this fall?

Yes, you’ll most likely find me purchasing FS2017 the day it is available to download via Steam.  Yes, you’ll also most likely hear from me via this blog (and perhaps via Twitch) regarding my first opportunity to play FS2017.  Of course, we are still several months away from all this.  But the good news of course is Farming Simulator 17 is coming….

While I’ve known about “other” farming base simulation games such as Pro Farmer and Farm Expert…and I’ve watched YouTube videos showcasing these games…I didn’t see them as competition for Giants and their Farming Simulator franchise.  But competition (real competition) is about to come to the virtual farming world.

In addition to the news from Giants regarding FS2017, we are also learning about a brand new entry into the “all things farming simulation” genre with a new simulation game titled Cattle and Crops.  You can visit their website here.  They also have a Facebook page here.  Cattle and Crops is due to be released sometime this calendar year (2016) and boasts the following (and I must say impressive) list of features:

Management – Your employees will help you take care of your farm, your animals and your estate.

Vegetation – Plant growth and health depending on multiple ground conditions.

Brands – Supported by our license partners in the industry.

Multiplayer – Join your friends in conquering the maps.

Modding Support – Enhance the game with your own vehicles and maps.

Made with Passion – By Gamers – For Gamers

In closing, like me…I’m sure you have many questions regarding the new release of Farming Simulator 2017 and of course, questions about the new Cattle and Crops simulation game.  With FS2017, I think we sort of know what we can expect from them.  With Cattle and Crops, well…this truly excites me.  While the jury is still out, my opinion is that the folks behind Cattle and Crops have been listening to many Farming Simulator users and have taken many of the requested enhancements which Giants may have been slow to implement (or not wanting to implement at all) and are planning to provide what we all want into the new game.  But again, the jury is still out.  But I say competition is good…and competition will help bring us forward.