As mentioned in the last tour update, our travelers since leaving Australia, have been bouncing from one island to the next.  Most of their activities have been focused on various island style activities.   One might think our group has had enough ocean fun…but that’s just not true.  Our next destination is Cape Town, South Africa.  What’s so interesting about Cape Town (especially when it comes to the ocean)?  Well…it just so happens this blog posting (completely by luck) will drop on the day before the 30th installment of the Discovery Channel’s popular Shark Week.  And just off the shore of Cape Town, you’ll find something very special.  The Great White sharks off the coast are some of the largest sharks on the planet and they do something a little different down here.  They breach and leap out of the water.  It’s truly an amazing sight…but you’ll really need a bigger boat with these guys.  If you’ve never heard of the breaching Great White Sharks, then check out this YouTube video. 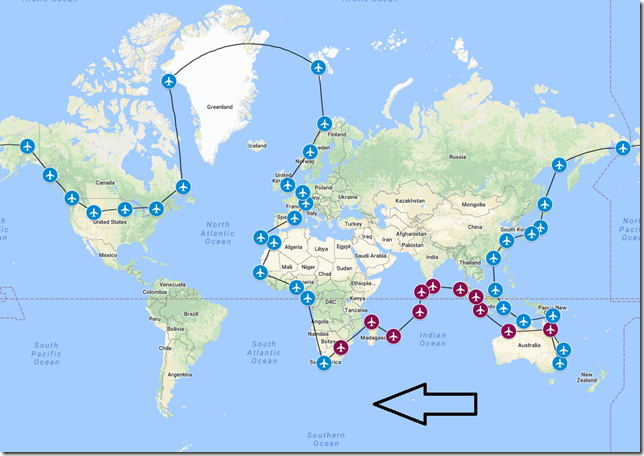 Cape Town International Airport (FACT) is the primary airport serving the city of Cape Town and is the second-busiest airport in South Africa and the third busiest in Africa. Opened in 1954 to replace the previous airport, FACT provides direct flights to South Africa’s other two main urban areas of Joburg and Durban as well as to smaller airports with South Africa. The air route between Cape Town and Johannesburg was the world’s 9th busiest air route in 2011 with an estimated 4.5 million passengers.

South African Airways is the flag carrier of South Africa. Founded in 1934, South African Airways flies to 38 destinations in 26 countries in Africa, Europe, North America, South America, Asia and Australasia. The airline has a strong presence in Southern Africa. Their current fleet consists of an all Airbus passenger fleet including the Airbus A319, A320, A330 and A340. They do own three older Boeing 737-300 freighters which are leased from Star Air Cargo. 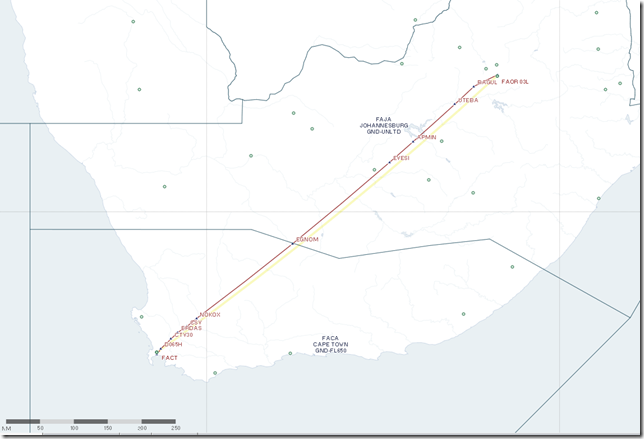 Our travelers have spent the past several days exploring the Johannesburg area, including a safari tour and overnight stay in Kruger Park.  I believe all had an enjoyable stay, but it’s time to once again move on.  Up to this point in our tour, our routing has taken us northwest as we traveled through Singapore and Indonesia, then we turned southwest towards Maldives and have been traveling mostly a southwesterly direction.  This will be the last leg (for a while) that we head in a southerly direction.  Once we depart Cape Town, out progress will be northwest and northeast until we reach Norway.  But for now, our direction remain southwest so let’s get started. 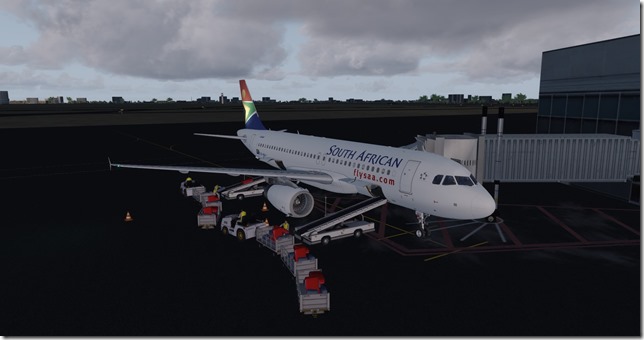 Lined up and waiting for our take off clearance from ATC. 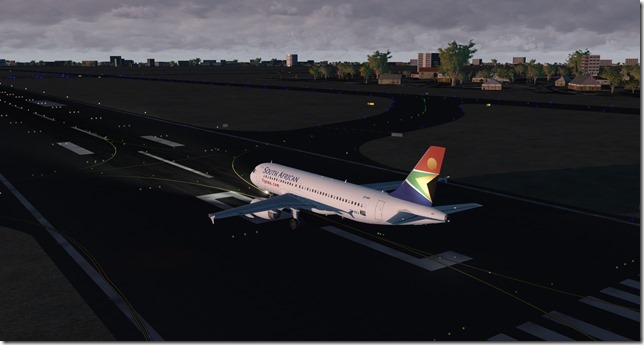 Up, up and away and goodbye Johannesburg. 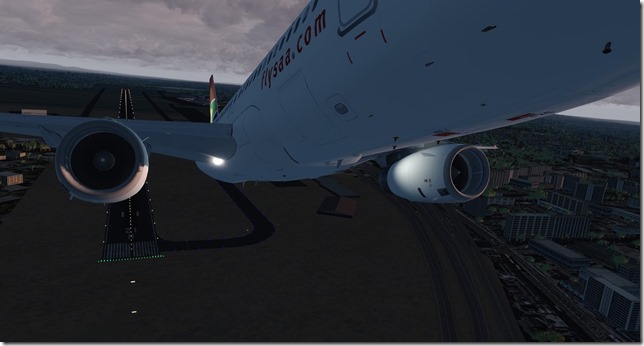 Making our turn to the southwest to join the departure out of FAOR. 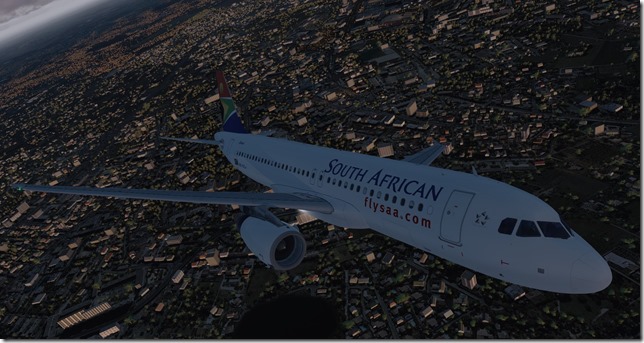 Could be a stormy night for the residents of Joburg. 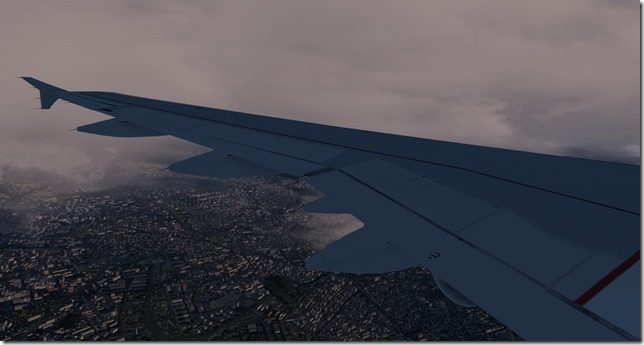 A bit of a bumpy climb, but ATC were accommodating and vectored us around the strongest of the storm cells. 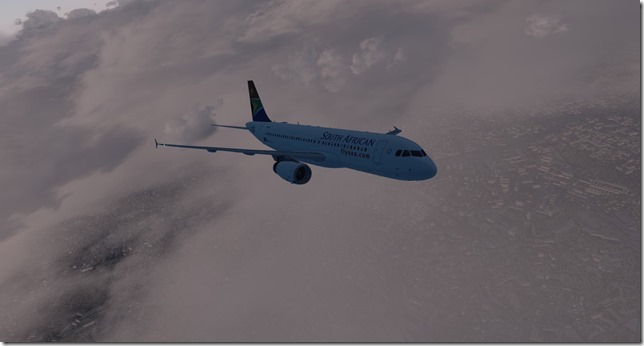 Our livery shot as we’re just about above the storm and clouds.  The sun is setting fast. 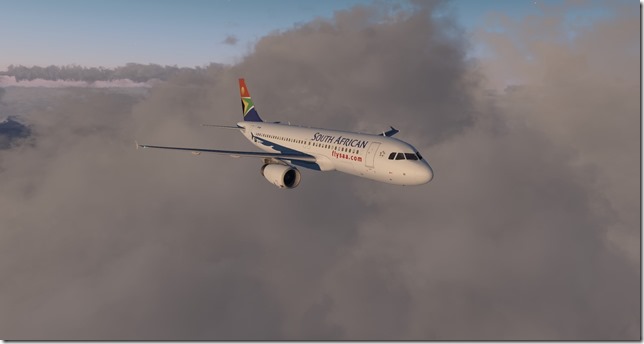 The sun has set. 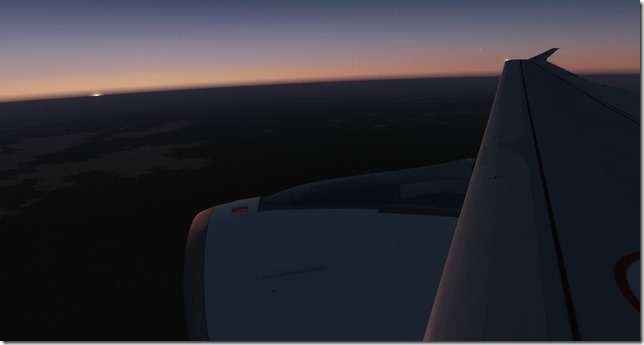 High above South Africa with the warm glow of the setting sun just visible along the horizon. 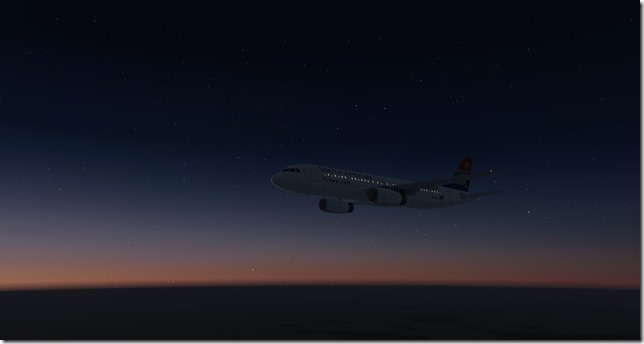 The view from the office at FL360. 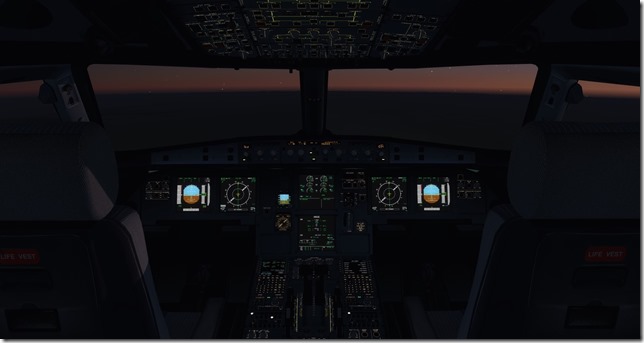 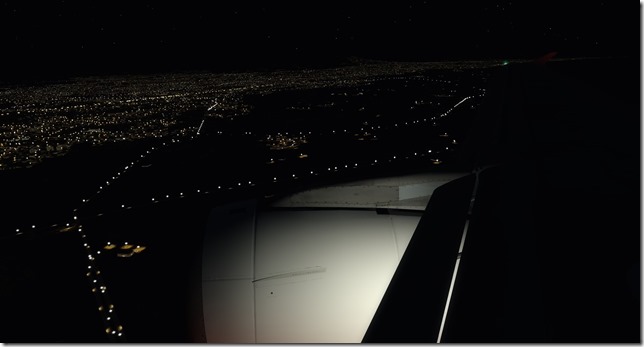 On short final into FACT. 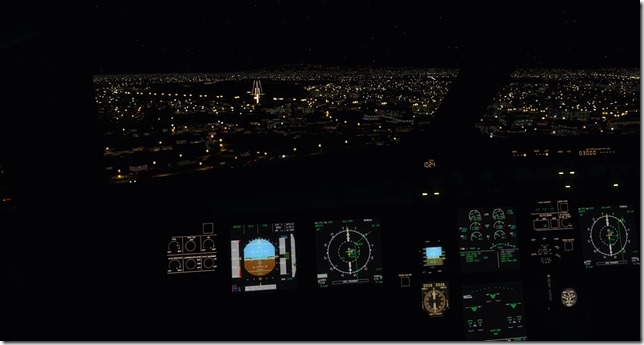 Our travelers have a busy few days exploring Cape Town.  Soon we’ll depart and begin our northerly trek.  The next leg will be the longest leg of the entire tour as we travel from Cape Town, South Africa to Libreville, Gabon which is 2,122 miles away.  For this next leg, we’ll be in the Boeing 787 Dreamliner which should help make the almost 5 hour, 20 minute flight breeze bye.

Until next time…Watch out for those jumping sharks!

I made a decision a few years ago not to attempt to become a “Breaking News” blog site.  I just don’t have time and I’m just one guy.  Most of the flight sim related content I write about either has to do with my own involvement in the hobby or news/information about products I own and use in my sim.  Sometimes I comment on newsworthy items within my writings as I often have opinions regarding these things.  After all, my experience in this hobby goes back a long, long time.  The title of this writing is called “FSLabs Making News – Once Again”.

If you search my blog site using FSLabs, you’ll find two articles.  You can read article one here, and article two here if you desire.  In each of these articles I more or less refer to the news from earlier in the year where FS Labs got caught inserting malware into their Airbus A320 aircraft.  This action according to FS Labs was in an effort to catch would be software pirates.

Before I continue any further, allow me just to state that I’m well aware software piracy runs amuck not only in the flight sim community, not only in the gaming community…but is an issue across the board for all software developers.  While more needs to be done to stop this behavior and bring those who commit these crimes to justice, there is a right way and a wrong way to go about this.  The steps FS Labs initially took was very much the wrong way.

FlightSimLabs (FSLabs for short) is an payware, add-on aircraft developer who has been around for a few years.  One of their first products was the Concorde-X.  The Concorde-X was developed for Microsoft FSX and was quite popular.  Those who have been around for a while may remember the Concorde was a featured, default aircraft in FS9, but removed in FSX.  Since the Concorde-X product, FSLabs have been working on developing near study level replicas of the Airbus A320 and A319 aircraft.  It’s their A320 product which first got FSLabs into a bit of hot water with the FS Community.

As I mentioned earlier, FSLabs first ruffled some feathers in the FS Community back in the February 2018 timeframe.  The story was so big that even bloggers, writers who would never even think to write about flight sim news covered it.  Here’s one of those articles.  In a nutshell, FSLabs wrote a bit of code which installed a “Chrome Password Dump” which was hidden inside the A320 installer.  This bit of malware could extract users personal information which is stored within the Chrome browser including passwords and billing information.

The founder of FSLabs (Lefteris Kalamaras) did apologize for the including such intrusive code in the A320 download and stated “I want to reiterate and reaffirm that we as a company and as flight simmers would never do anything to knowingly violate the trust that you have placed in us by not only buying our products but supporting them and FlightSimLabs”.  He further stated “While the majority of our customers understand that the fight against piracy is a difficult and ongoing battle that sometimes requires drastic measures, we realize that a few of you were uncomfortable with this particular method which might be considered a bit heavy handed on our part.”

As many others have pointed out in various articles and blog postings, the action taken by FSLabs and its founder Lefteris Kalamaras is disturbing, highly unethical and while I’m not a lawyer, I would even think this action borders on illegal behavior.  While much of the flight sim community compares FSLabs and their A320 to the likes of PMDG and their lineup of Boeing study level aircraft, with the right apologies and follow-thru, I personally could have considered giving them a second chance.  After all, forgiveness right?  But as the weeks and months from the initial news regarding the malware unfolded, it has once again thrust FSLabs into the news and once again it appears they are not doing the things they need to do to win trust within the community.

One might think if FSLabs were sincere in their apologies they would just ensure everything they did going forward was 100% positive within the flight sim community.  They would keep their heads down, develop the finest Airbus products available and provide awesome support to the community.  Then hope, pray and beg for the forgiveness from the community.  But no…in recent days two additional little bugbears have popped up which have further ruffled feathers in the community.

The first installment of how bad can you run a flight sim add-on company was how FSLabs and their founder have been threatening some folks over in the Reddit community and perhaps other bloggers/writers.  The second major mess-up appears to be in how their A320 installer is writing a cmdhost.exe file under the Windows system32\ and SysWOW64 directories.

While I’m not an application developer, I do understand enough about the Windows operating system to know that these directories are no place for third party installers to write anything to.  From previously published articles it appears this action was a necessary part of its eSellerate infrastructure and provides communications between the eSellerate servers and the FSLabs installed product in an activation interface scenario.

Final Thoughts on this matter

Again, it’s not my intent to report news.  I would much rather spend my time flying and writing about all the wonderful things taking place in the flight sim community.  However, as I often receive emails asking for assistance and advice related to various subjects in the hobby, I felt I wanted to at the very least share my thoughts on all this.  The very sad part of this entire story is FSLabs have done a remarkable job (from all that I’ve heard) on developing a near study level Airbus A320.  I actually would have loved to own this product, but as I previously stated, I will NEVER purchase anything from FlightSimLabs.  Of course, I don’t believe my reluctance in purchasing their products will bankrupt them.  However, while I will not outright say you should avoid purchasing their products, I will just encourage you to conduct your own research and just be very careful if you do decide to purchase any FSLabs product.

Are you an Airbus Fan?

I’ve got to admit that my passion for tubeliners isn’t in the Airbus camp.  I’m a Boeing guy.  But while I may prefer Boeing to Airbus, I do enjoy from time to time flying the smaller Airbus A318/A319 & the A320/A321 aircraft variants as this opens up a totally new and different world to virtual aviation.  It allows me to simulate airline operations for the likes of Frontier, EasyJet and many others who are 100% operating Airbus aircraft.  Or it allows me to simulate the Airbus operations for American and British Airways who both operate a mix of Boeing and Airbus aircraft within their fleet.  The wait will soon be over as I mentioned a few weeks ago, the Aerosoft A318/A319 & A320/A321 series of aircraft will be released for Prepar3D v4.  I owned these for FSX and earlier versions of P3D and have missed them in P3D v4.  Aerosoft is a software developer we can trust to not only develop and support a quality aircraft simulation product but do it without playing silly buggers with us in the process.  The Aerosoft Airbus series is scheduled to release on 26 June and once I make my purchase, download and install…you can expect a full review here on my blog.  Of course, as it’s been over a year since I’ve operated an Airbus aircraft, I’ll need some time to come up to speed on them.  But hopefully it’s just like riding a bike.

As always, thanks for reading.  Look for my blog report from the first leg of my WorldFlight GBS 2018 tour to drop on Wednesday.  It was a fun flight from Sydney to Cairns and as I type this, I’m actually flying leg 2 from Cairns over to the western corner of Australia and the city of Broome.  I hope you’ll return to Planes, Trains and Automobiles (and Farming too) to catch up on all the action.