Last week I wrote an article titled “The Wonderful World of Virtual Airlines”.  I discussed the finer points of why one might want to join a VA and provided a short list of examples of those VA’s which I’ve had direct experience with.  As I mentioned in that article, virtual airlines are not for everyone.  For all the reasons why one might want to join one, there could certainly be an argument made towards all the reasons why one shouldn’t follow that path.  It really boils down to the individual and what he/she wants to get out of the flight simulation hobby.  There really is no right or wrong answer.

With a few rare exceptions, I’ve typically been a one VA at a time type of person.  The free time I often have to enjoy my simulation hobby is sometimes limited.  One of the points I tried to hammer home in that previous article was most (if not all) VA’s will require a minimum level of participation to remain active within the organization.  While this is typically only 1-2 PIREPS per month, there have been times where I’ve completely burned out due to too much going on in my life and just need to take an extended break.  Other times I’ve lost interest in flying online and if you fly for an online only type VA, then this can be an issue.  But I digress…

With the gaining popularity of flight sim after the release of the new Microsoft Flight Simulator 2020, and my own enjoyment with the new sim, I’ve wanted to do more with my new investment.  As I’ve pointed out in previous articles, for me…MSFS2020 will be used (for now) as mostly VFR GA flights.  I just don’t feel the default aircraft are VATSIM ready and I do enjoy flying jets on the VATSIM network.  So until such time as study level aircraft are available for MSFS2020, I’m going to stick with GA in that sim.

A few days ago I saw a Facebook posting in the VATSIM group regarding UK Virtual being compatible with MSFS2020.  I had heard great things about UK Virtual over the years and decided to check out their website.  I really liked what I saw with regards to the number of airlines they feature (over 120) and the airlines schedules (over 35,000).  But what really caught my eye was their GA (general aviation) tours.  The wheels in my brain began to turn and within a few minutes I had filled out my application and was anxiously awaiting the approval confirmation.

UK Virtual, but not virtually all UK

The name might imply that this is mostly a UK based virtual airline.  Not true!  While the vast majority of members might be from the UK, UK Virtual has members from all over the world.  The 100+ airlines they feature are also from all over the world.  All the major US airlines including the major freight carriers are represented.  So the possibilities are truly endless.

Those wheels in my head I mentioned a few minutes ago now have me flying the default Cessna 172 in the new Microsoft Flight Simulator 2020 as I’m flying along the old Route 66 from Chicago all the way to Santa Monica, CA.  This tour (the first one I’ve attempted with UK Virtual) is divided into two parts.  Part one consists of 15 flight legs with the first leg departing Chicago O’Hare (KORD) and ending at Tucumcari, New Mexico (KTCC). 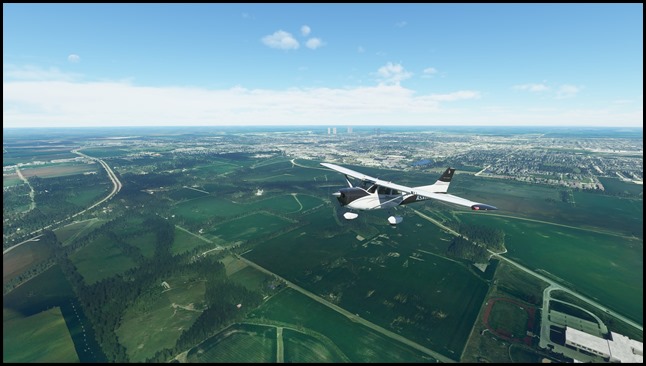 The tour ends on 30 September, but as I’m half way through part 1, I shouldn’t have an issue making it all the way to Santa Monica. 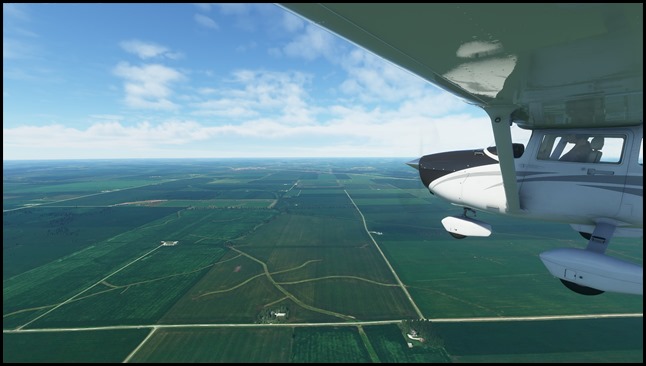 Somewhere over southern Illinois on my way towards St. Louis. 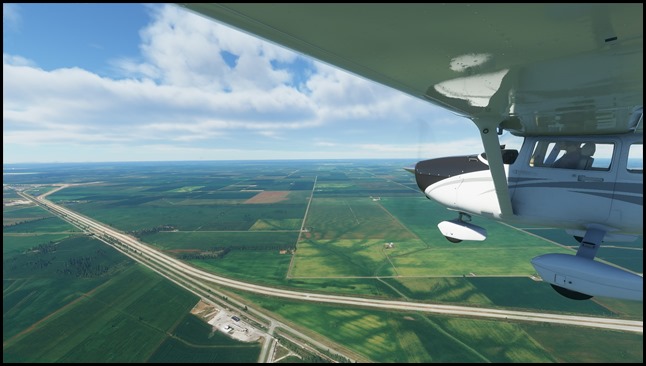 Flying VFR and following the old Route 66 towards St. Louis. 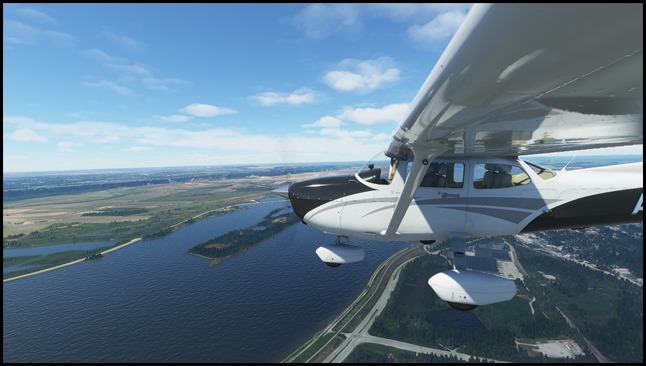 The mighty Mississippi River as we near St. Louis.

Part two of the tour will depart Tucumcari, New Mexico and end in Santa Monica, California.  I’m sure I’ll provide an update as part two as I begin in a week or so.

Over all I’ve been very pleased with the way this tour was setup.  There’s a mixture of large airports and smaller municipals mixed in for variety.  When flying VFR with GA aircraft I do prefer the smaller municipal/regional airports to the larger airports as it cuts down on taxi time.  But all-in-all I’m having a fun time with this tour and with UK Virtual.

Of course UK Virtual offers plenty of tour options for jet aircraft which I’m sure I’ll explore in time.  I’ll also provide a similar update in a few weeks as I explore the many airline schedule offerings so stay tuned.

As a follow up to last weeks article on “Learning a Study Level Aircraft”, I thought I would follow it up with my recommendations for your first payware, study level aircraft purchase.  Because not all virtual pilots are interested in jet tubeliners, I’m going to throw out two recommendations with the first being a GA or General Aviation type and the second being a jet tubeliner.

The recommendations I will provide are add-ons that I own and enjoy very much.  Neither are overly complicated assuming you approach both with an understanding that their operational characteristics vary greatly from the freeware/default type aircraft you may be accustomed to flying.  In addition, I will also just (as a reminder) encourage you to conduct your own research just to make sure your PC meets the recommended specifications to run the payware add-on aircraft.  While it really makes very little difference regarding the flight sim platform you use (FSX, FSX:SE, P3D v2, P3D v3 or P3D v4) just keep in mind that if you are running something other than P3D v4, you may be required to repurchase the add-on when/if you upgrade.  Let’s get started…

I’m almost of the belief that every virtual pilot should own this aircraft.  I think it just makes sense.  After all, pretty much all the basics of flight can be learned and that knowledge finely tuned in this aircraft.  The A2A Cessna 172 Trainer is available from A2A Simulations and most will agree is the finest study level general aviation aircraft you can purchase.  Depending on your sim platform, this wonderful aircraft will run you from $49.99 – $79.99.  The A2A Cessna 172 Trainer is feature rich and designed to be flown by the book.  I’ve spent hours and hours and several more hours just flying around.  It’s the perfect airplane for really taking in all the eye candy available in Orbx sceneries.

My readers shouldn’t be surprised that the PMDG 737NGX is my recommended and truly “must have” jet tubeliner.  Much like the A2A Cessna, the PMDG 737 is one that should be in everyone’s virtual hangar.  Yes, I know it’s extremely difficult to perhaps not choose the beautiful PMDG Queen of the Skies Boeing 747-400 or the incredibly beautiful PMDG Boeing 777.  Likewise, the QualityWings Boeing 787 Dreamliner is also gaining a lot of traction in the community.  But if you’re a Boeing fan, and you are interested in jet aircraft…then the PMDG 737NGX really should be in your hangar.

Once you master the 737 and understand the “Boeing Way”, the rest of the Boeing family of aircraft will almost be a piece of cake.  The other advantage with starting with the NGX is this aircraft truly is the workhorse in the airline industry.  Just about every major airline has (or have had) a fleet of Boeing 737’s and it’s the perfect short to medium haul aircraft.

As I often say, there’s no right or wrong way to do things.  The hobby of flight simulation is no different.  There are virtual pilots who only prefer general aviation and there are those who only enjoy flying the jets.  Of course, there are lots who enjoy both and the A2A Cessna 172 and the PMDG 737NGX are the best in class for these two flight sim areas.  Get one or get both and enjoy the experience.  Thanks for reading!