Farewell to the Queen

If you follow real world aviation news then I’m sure you’ve heard the sad news which was announced last week.  Of course I’m talking about British Airways plans to retire their fleet of 28 Boeing 747-400 aircraft.  In pre-COVID times, British Airways was the largest operator of the B744 and had plans to continue to operate the type into 2024.

I’ve had the pleasure to fly on three BA 744 flights in the past 5-6 years with the last flight being summer of 2019. While I’m fascinated with all aircraft types, the Boeing 747 Queen of the Skies was my absolute most favorite.  British Airways began operating the 747-400 into Denver with their daily non-stop to London Heathrow about 6 years ago, replacing the Boeing 777-200 which had been used from the beginning of the DEN to LHR service.  Of course the daily BA flight which connects Denver to London has been cancelled since mid March and I’m uncertain when it will resume.  Most likely once the daily service resumes BA will either return to using the B772 or perhaps the Dreamliner.

The reasons for BA retiring their 747 fleet ahead of schedule boils down to lack of passenger demand and of course to the inefficiencies with the four engine beast.  Of the 28 remaining 744’s in BA’s fleet, the majority were 20+ years of age and have served the airline well.

If I could predict the future, I’d probably first focus on the next six numbers in the lottery…but who really knows what the future of passenger airline travel will look like.  I suppose most of us believed this COVID-19 pandemic would have wrapped up by now and it appears there is no end in sight of it just yet.  I read a few weeks ago that it could be 2023 or even 2024 before airline travel returns to the status it was pre-COVID.  But I’ve learned over the past few months not to really trust anything I hear as short of God himself, know one knows.

Thanks for reading and please continue to take care of yourself and each other.  We will get through this.

My Top 5 Passenger Airlines to Simulate

Yes, another of my top lists related to flight simulation.  This time, this is my top 5 list of passenger airlines I enjoy simulating their operations.  I simply couldn’t narrow my list down to just five and I felt ten was just going to be a stretch.  While I do simulate other airlines than those I’m listing here my typical go to airlines are always pretty much the same.

VLM was a small Belgian airline based in Antwerp.  It ceased operations on 31 August 2018.  Ironically, my wife and I used VLM in real life to fly from London City Airport to Antwerp when we visited her family.  The last time we traveled on VLM was our return flight from Antwerp back to London City on 31 August 2018.  Yep, that’s right!  We were one of the last passengers.  VLM operated the Fokker 50 turboprop aircraft and it was always a joy to fly both in the simulator and real life.  My favorite VLM route of course is the London City (EGLC) to Antwerp (EBAW) and the return.

I consider EasyJet (EZY) to be the Southwest Airlines of the UK and Europe.  They fly everywhere and they fly from many locations.  like Southwest’s all Boeing fleet, EasyJet is an all Airbus fleet consisting of A319’s, A320’s and A321’s.  A perfect airline if you have the FSLabs Airbus packages.  While I don’t fly the FSLabs Airbus as much as I fly the Boeing 737, I do enjoy the time I spend in the aircraft.  One of my favorite EasyJet routes is London Gatwick to Innsbruck, Austria (LOWI).

I absolutely love the Boeing 737 and it’s my all-time favorite aircraft to fly in the simulator.   So simulating Southwest Airlines (SWA) shouldn’t come as a surprise.  What I like most about Southwest is their routes.  While I do enjoy the hub/spoke route model of airlines like American and British Airways, I also like to be able to fly point-to-point and SWA gives me this freedom while still simulating a real-world schedule.  My favorite Southwest Airlines route is Denver (KDEN) to Austin (KAUS).

British Airways (BAW) ranks number two for many reasons.  First, I’ve been a fan of BA for about as long as I’ve been involved in the flight simulation hobby.  I loved flying the Concorde when it was first introduced in Flight Simulator 2000.  Second, they are one of the only remaining airlines to still be flying the Queen of the Skies, the beautiful Boeing 747.  Today I enjoy flying short to medium haul routes out of London Heathrow, Gatwick and London City.  Between BA’s current and retro fleet of aircraft, there are tons of options to simulate.  My favorite British Airways route is London Heathrow (EGLL) to Gibraltar (LXGB).  For long-haul, of course that would be Denver (KDEN) to London Heathrow (EGLL) in the Boeing 747-400.

In my early career, I spent lots of time flying in and out of Dallas/Ft. Worth on American Airlines (AAL).  Back then most flights were either on the MD-80, Fokker 100 and the Boeing 727.  After moving to Denver in 1998, I still flew American every chance I could.  My first trip to England back in early 2001 was on American Airlines and a Boeing 777-200.

Around 1999-2000 timeframe was when virtual airlines became popular.  Of course, with American being my favorite airline I enjoyed flying for several American Airline VA’s.  I’ve logged many hundreds of hours flying AA aircraft around the virtual skies.

While I no longer fly for a virtual airline, American Airlines is my most frequently flown airline in the sim. I tend to fly the Boeing 737-800 the most, but also enjoy flying routes on the 787 and 777.  My favorite American route is Denver (KDEN) to Dallas/Ft. Worth (KDFW).  My second favorite route is Miami (KMIA) to Sint Maarten (TNCM).  The approach into and departure out of this awesome airport never gets old.

There you go!  These are my top 5 (plus an honorable mention) of my favorite passenger airlines to simulate.  While this is certainly not an exclusive list of the only airlines I enjoy flying in the sim, these are my most frequent.  But regardless of which airlines make up your top list, I hope you enjoy the time you spend in the simulator as much as I do.

I know I’m not the only one who enjoys simulating their real world flights either before or after any trip.  I’m actually a little superstitious about it to be honest.  In the past dozen years or so, there’s only been one real world trip which I didn’t fly in the sim before hand.  It was a few months ago when I received the word that my Mom had passed away.  I rushed out to KDEN and jumped on a Southwest Boeing 737-700 and flew to Austin.  When I got back home a week later and found myself in the mood to spend some time in Prepar3D, I setup that flight in memory of my mom.  I think she would have appreciated that.  After all, flight simulation has been a hobby I’ve been involved with since I was a teenager back in the early 1980’s.

I’ve had many.  When I first moved to Denver back in the late 90’s, I would fly to visit my family in Texas.  Before hand I would simulate an American Airlines flight from KDEN to KDFW in one of my favorite aircraft the MD80.  After landing at KDFW, I would jump in a Saab 340B and simulate the quick flight down to Killeen – Fort Hood Regional.  Then I would do the reverse.

Of course, in my job I’ve traveled a lot.  Some domestic and many trips overseas.  After all it was a business trip back in 2001 which led to me meeting my now wife.  But regardless if I traveled domestically or international, I set aside the time to simulate the roundtrip flights before I head to the airport in real life.

By the time you read this, my wife and I will be halfway through our European vacation.  Once again we’re headed cross the pond from Denver to London Heathrow via the Queen herself a beautiful Boeing 747-400.  A trip I’ve made about a dozen times.  Anyway, we’ll spend a few days in the English countryside before heading to Antwerp, Belgium (family visit) on the Eurostar for a week, then back to the English Countryside for another week and then back home to Denver.

Of course, no trip of this magnitude can be completed without snacks.  I’ve gotta say, the food British Airways serves in their business class is top-shelf and the drinks are nice as well. 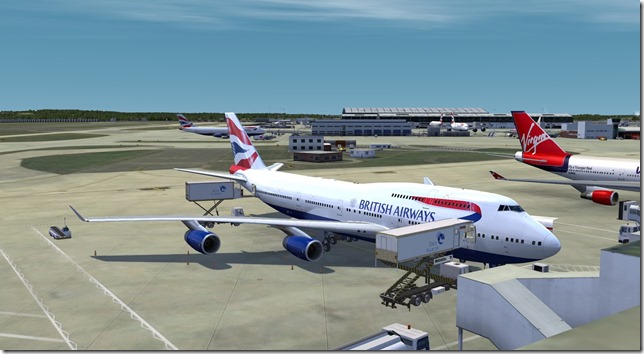 I would have snapped a picture of the bags being loaded, but GSX being GSX decided to use belt loaders which just looked really silly.  So here we are being pushed back from our stand at London’s Heathrow (UK2000) airport (one of my favorite airports in the world). 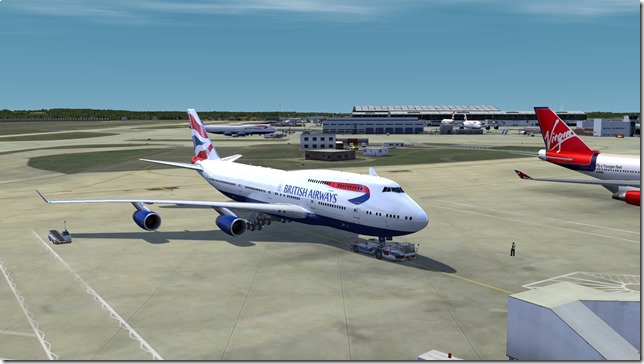 Pushback complete, time to taxi out to 27R 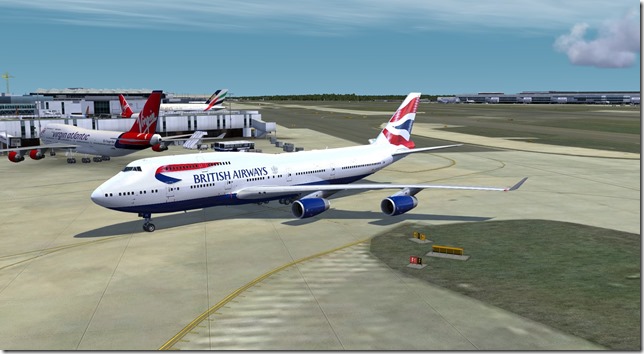 Once you get this big girl rolling, she just wants to fly and fly she does.  I don’t fly the Queen near as much as I wish I could. 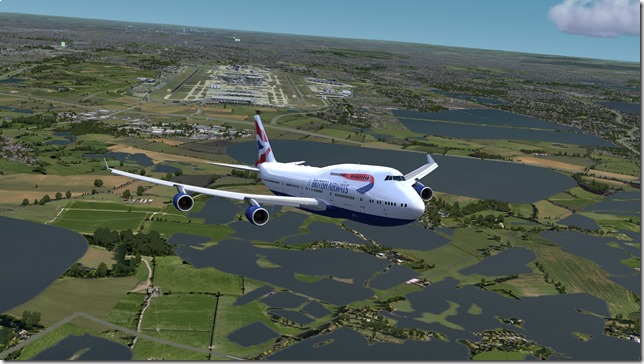 Well on our way across the Atlantic. Personally I find the return trip to be a lot easier than the eastbound trip.  I think it has to do with flying during all daylight hours. 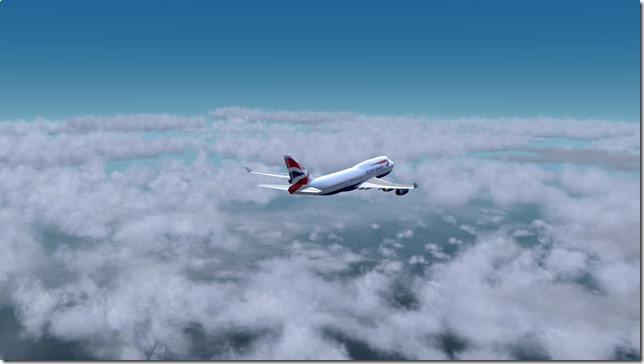 If you happen to live or have visited the Denver area, then you know all about our late afternoon thunderstorms.  They can wreak havoc with on-time departures and can cause holds while these powerful, but quick moving storms move near Denver International.  In the below, we’re approaching KDEN for the ILS 16L approach with storms brewing just northwest of the field. 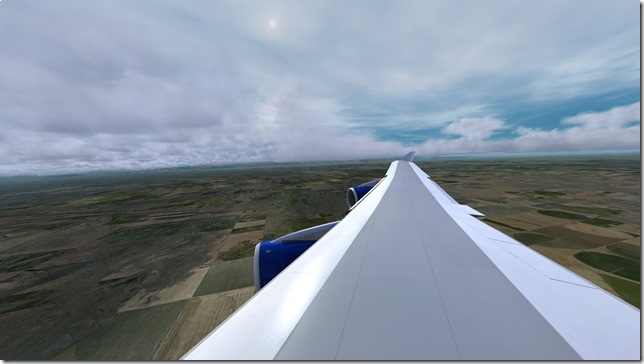 Touchdown imminent.  9 hours, 45 minutes after pushing back from Heathrow we safely touchdown on runway 16L at KDEN (Flightbeam). 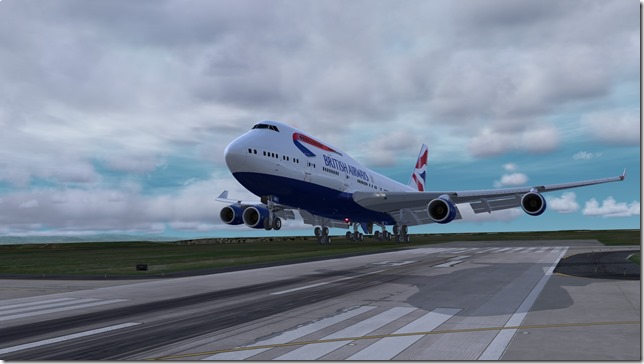 And with that…I’m ready to board the Queen for what might be my last flight aboard a Boeing 747-400.  As most will know, United Airlines retired their last 744 in 2017 and with that it marked the end of any US carrier flying the Queen.  Other airlines including British Airways have also started the process of replacing their 747 fleet with 777’s, 787’s and others from that other aircraft manufacture.

Until next time….God Save The Queen!