Our tourists are once again on the move.  The time spent in Singapore was certainly not disappointing.  Only time will tell just how historic of an event which also took place while our travelers were visiting Singapore.  Without getting too deep in the political weeds, I’ll just say that anything positive will certainly be a great thing for not only the region…but the entire world.  As mentioned during the last trip report, we will be flying this next leg in the beautiful QualityWings Boeing 787 Dreamliner.  For this leg we’re flying the Scoot Tigerair Dreamliner.  Scoot Tigerair (not to be confused with Australia’s TigerAir) is a low-cost airline from Singapore.  More about that later. 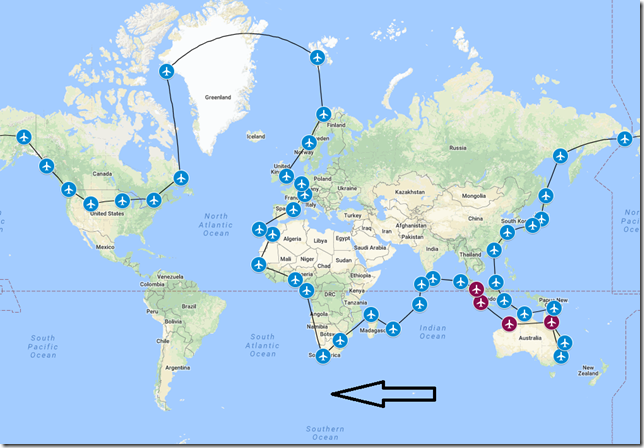 An updated version of our tour map.

The Sultan Iskandar Muda airport is located 13.5km southeast of the capital of Banda Aceh, in the province of Aceh, Indonesia. Banda Aceh is situated at the tip of Sumatra and has long been a strategic, transportation and trading hub in the eastern Indian Ocean. The first mention in western accounts comes from 1292 when Marco Polo and his expedition visited the city and noted as the logical first port of call for travelers from Arabia and India to Indonesia. On December, 26 2004 the city was hit by a tsunami which was caused by a 9.2 magnitude earthquake in the Indian Ocean. The disaster killed an estimated 167,000 inhabitants and destroyed more than 60% of the city’s buildings. 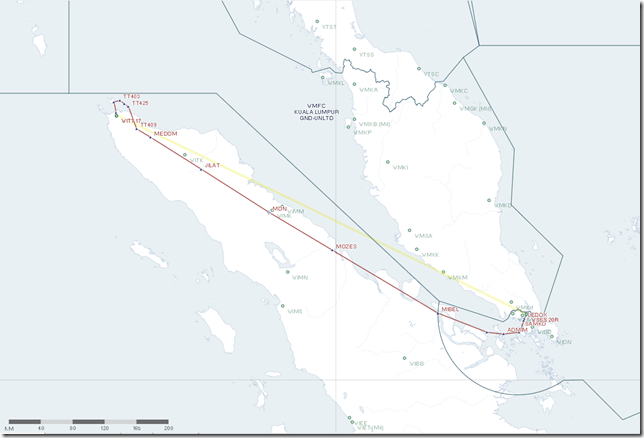 Once again it’s time for our travelers to head towards their next destination.  Our next stop will once again have our travelers back in Indonesia, but this time on the northern side of the equator.  Once again the clouds are building as this is pretty much the pattern in these locations.  The ground crew in Singapore is getting the final cargo items loaded and soon we’ll pushback and taxi to the runway. 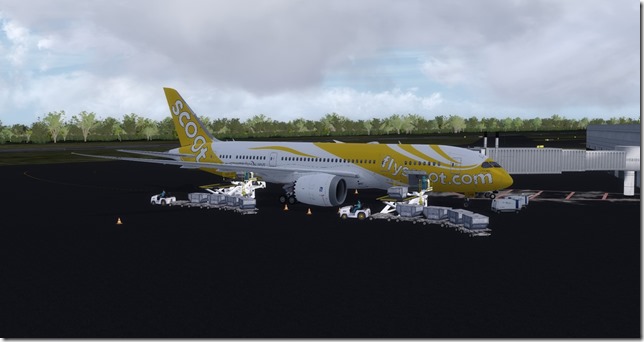 As Scoot is a subsidiary of Singapore Airlines, the Singapore airlines crew is helping with the ramp operations including pushback. 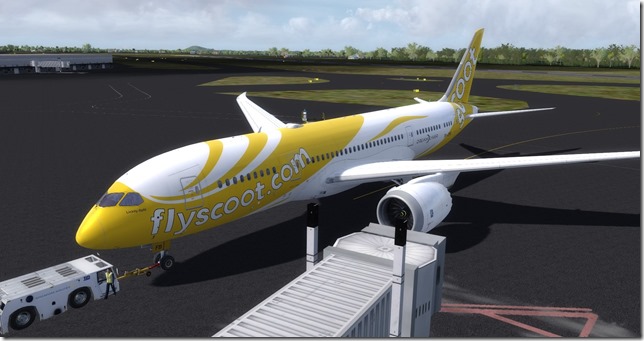 If you follow aviation news, you may know there are some major issues with the Rolls Royce Trent engines.  However, in the virtual world…they work just fine. 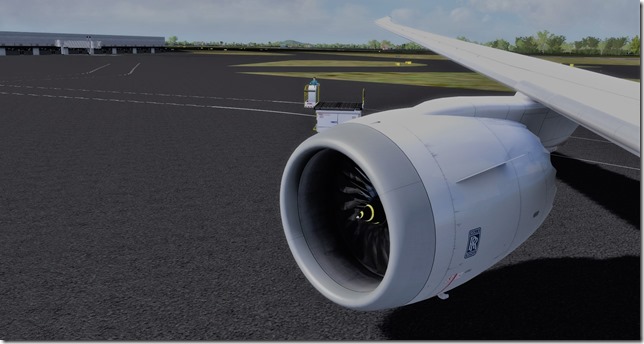 Lined up and waiting on runway 20C.  The tires have been kicked, we’re just waiting to light the fires on these RR Trent engines and get the Dreamliner in the sky. 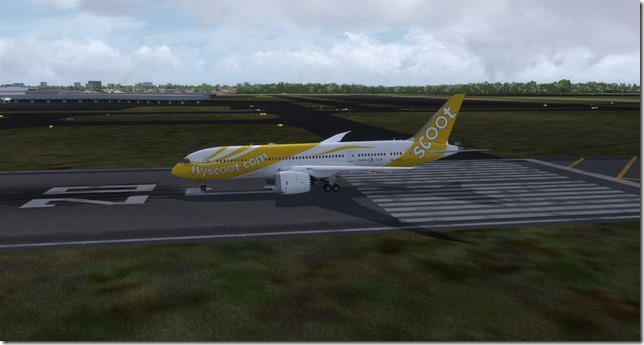 Just as the tag-line reads under the Captains window, it’s time to “Lickity Split”. 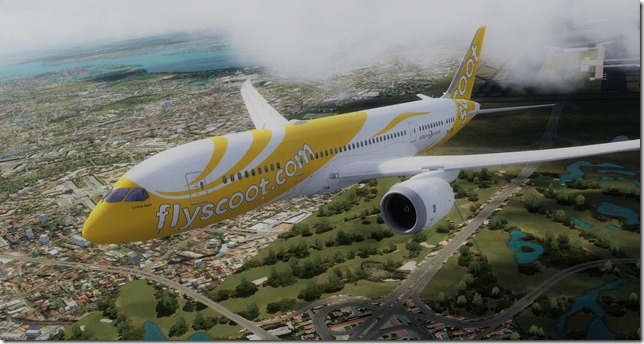 A little artistry “Dream like effect” for the beautiful Dreamliner. 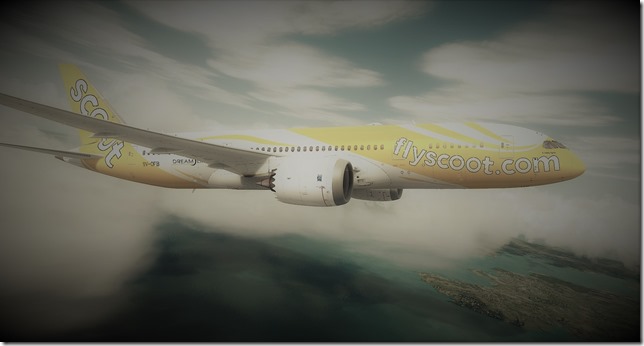 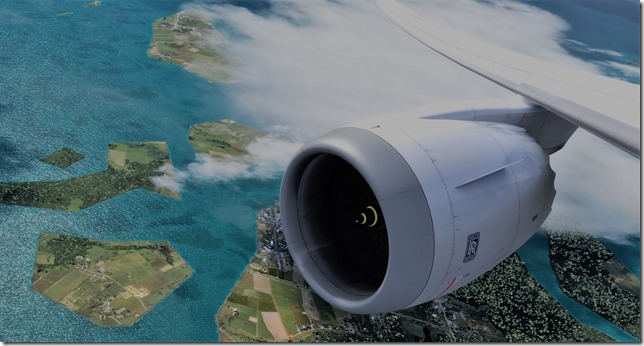 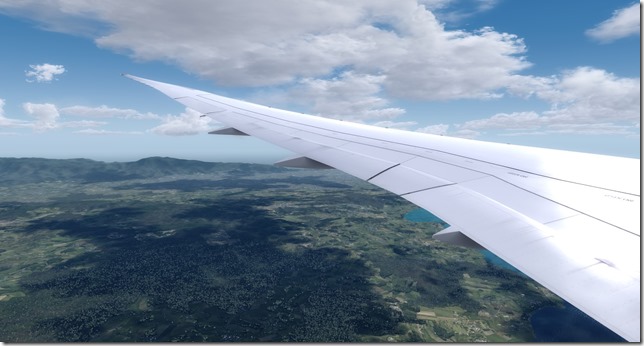 Fully configured for our landing this evening. 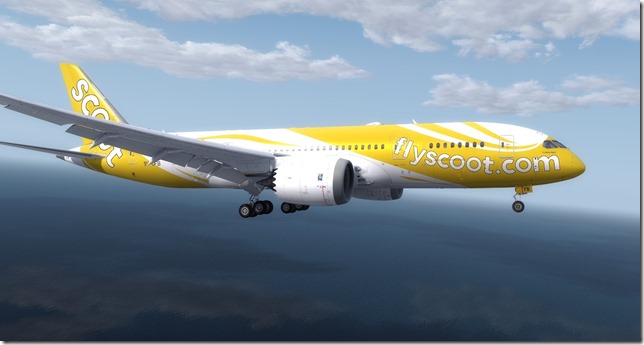 Short final into our very basic default P3D airport.  Not a lot of eye candy. 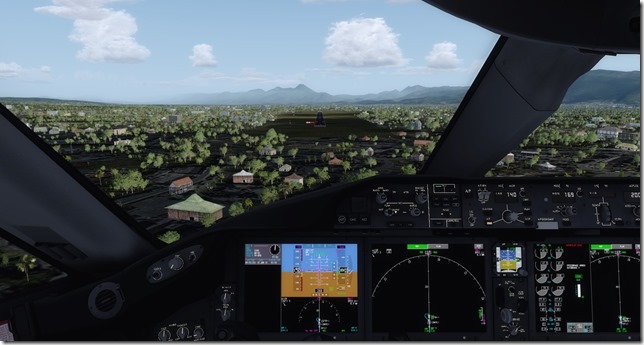 Parked and awaiting the ground crew.  Another leg is safely and successfully in the books. 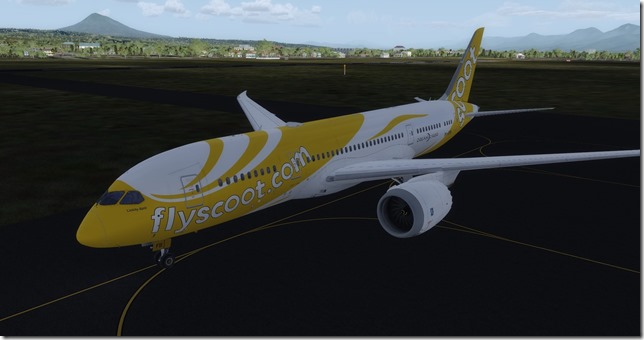 Yes ladies and gentlemen, another successful and most importantly safe flight in the books.  As I have some real-world travel of my own coming up, it will be a few days before I can sit down and fly the next leg.  But when that time comes, we’ll be back in the Boeing 737-800.  While I haven’t planned out the equipment for each leg of the tour, my guess is the 737 will end up being the most used aircraft for the tour.  But I’ll do my best to keep it interesting.  Thanks for reading.

Hello to all.  Life has been quite busy for me the past few months.  I must apologize to my readers as in typical fashion, my busy schedule has had an impact on my blogging.  It’s been several months since I posted an article to my blog and for that I must apologize.  I had the best intentions of writing more and of course writing about flight simulation.  After all, it was flight sim which caused me to create this blog site over 10 years ago.

As I write this, I’m sitting in my hotel room in Orlando, Florida where I’m on my third business trip in the past five weeks.  I just got back from dinner (I’m stuffed), turned on the TV (boring) and decided to check my email.  One of my long time readers messaged me asking if I had spent any time with the newly released QualityWings 787 Dreamliner and what my impressions were.  Well…unfortunately, I had to answer his question with a short answer of no, followed by some additional comments I’m going to share here.

I believe the last time I wrote about the QualityWings 787 was back in June of this year.  At that time I had read a Facebook message stating the aircraft was expected to be released in the Summer of 2017.  Unfortunately, QualityWings missed their mark slightly.  The season of summer came to an end on Friday, September 22nd and the QW Dreamliner was released in early October.  Now I realize I’m being a bit cheeky with pointing this out….but details matter right?  OK….perhaps not.  The good news is the much anticipated QualityWings 787 Dreamliner is available, but the bad news…it’s only available for FSX!

Of course, we knew this would be the case and I even touched on that in my previously mentioned June blog post.  QW explains this decision is due to the fact the 787 has been in development longer than Prepar3D v4 (or even v3 or v2) had been in existence.  While I understand this fact, I must also mention that I’m of the opinion that QualityWings really have never fully embraced the Prepar3d P3D platform.  While it is true they did FINALLY update their Boeing 757 for P3D v2.5…but their treatment of P3D could be likened to that of a “red headed step-child”.

While I fully realize many flight sim enthusiasts still fly FSX and FSX Steam Edition, surprisingly there appears to still be a large number of FS9 users….but I’m of the opinion that FSX (in all forms) is just simply dead.  But I must again say that I don’t blame or fault QualityWings for releasing the Dreamliner for FSX.  But I’m curious how long it will take them to bring this wonderful aircraft to P3D v4?

I know some might say, “but the QW development team is small” and “these things take time”.  I get all that.  But I will remind everyone that PMDG was able to update their older Boeing 737 NGX which was released in the 2011 timeframe (if I’m not mistaken).  So in theory, the same can be said of PMDG that they began development on an aircraft prior to Prepar3D, but was still able to update/release the NGX for P3D v4 within a few weeks of release.

So….to answer my readers question.  Unfortunately, when Prepar3D v4 was released earlier this year I made the decision to embrace it as my flight sim platform and I’ve not looked back to earlier P3D versions or FSX since and I don’t plan to.

But having said that.  Just as soon as this beautiful aircraft is released for P3D v4.x, I will purchase it and I’m sure I’ll have more than a few things to say about it here.

I’m exhausted after a long day and ready to turn in.  I’ll post this sometime on Wednesday or Thursday.  So until next time….Happy Simming!