I hope everyone had a Merry Christmas and a Happy New Year!  The annual Navigraph flight sim survey results were released just before the holidays and the survey says…..P3D is dead!  In all honesty, I’m not surprised.  After all, many of the top 3rd party developers have all but stopped creating add-ons for P3D and have moved to Microsoft Flight Simulator.  This year over 25,000 of your fellow flight sim enthusiasts participated in the survey (up by over 1,000 from the 2021 survey).   The 2022 version of the survey included 67 questions ranging from VR Headsets, graphic cards and of course which flight simulator platform is most popular.

Just to show a comparison, I’ve posted screenshots from both the 2021 and the most recent 2022 survey.  These results show a continued downward trend with the use of P3D and a continued rise with MSFS. 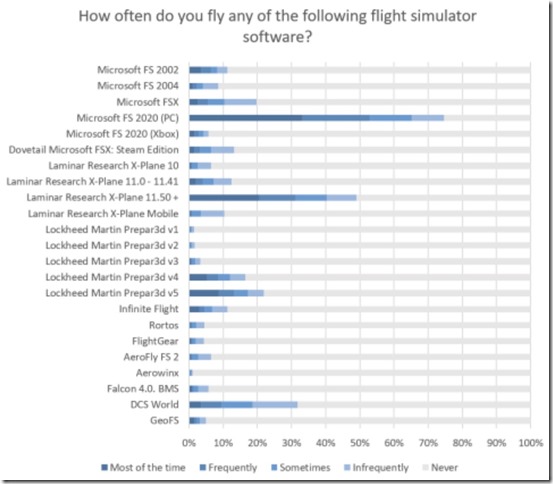 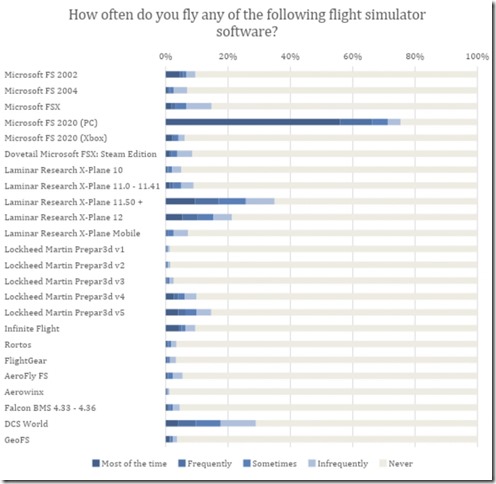 Of course I realize not all flight sim users participated in the survey and certainly not all P3D users participated.  Some MSFS users are still flying P3D at this time due to the lack of long-haul, widebody aircraft which I discussed back in November 2022 in my reader question response for “Where are the widebodies?”  But the continued rise in popularity of MSFS and the subsequent decline of P3D certainly can’t be ignored.

While there are rumors floating around the flight sim community that Lockheed Martin is looking into utilizing the Unreal Engine for a future release, the same more than a decade old problem is still a possible concern.  Of course I’m talking about the way that P3D is licensed and the EULA or End User License Agreement which looms over the P3D franchise.

In summary, when Lockheed Martin acquired the intellectual property and source code for the Microsoft ESP product, an agreement was signed which limited how Lockheed Martin could sell and distribute the Prepar3D platform.  This licensing agreement restricted Lockheed Martin from offering a “For Personal, Home Entertainment” license.  This of course had an impact on the pricing for not only the sim itself, but also for many of the 3rd party add-ons.  Specifically PMDG changed their pricing structure from what had been established on the FSX platform.  Of course, Lockheed Martin could release a completely brand new product developed on the Unreal Engine and thus render the agreement with Microsoft null and void.

In any event, I honestly believe the future for Prepar3D (at least for the majority of flight simulation enthusiasts) will continue to decline further during the new year.  As most of us expect, PMDG will release their Boeing 777 for MSFS sometime in 2023.  Most likely this won’t happen until the later part of the year. But once this does happen, most who are still  hanging onto P3D just for the 777 will most likely make the move to MSFS.  In addition, many other widebody aircraft are due to release for MSFS (example the Airbus A380) in 2023.  Microsoft/Asobo will continue to further enhance the MSFS platform beyond the current capabilities which will continue to increase the gap between MSFS and the other platforms.

Does all this mean you must abandon P3D?  Absolutely not, fly what you want to fly….however, my advice to anyone who is new to flight simulation is to use caution when choosing to further invest money through 3rd party add-ons for the P3D platform.    Any add-ons purchased today for P3Dv4 or P3Dv5 would most likely be obsolete if LM were to move forward with the Unreal Engine concept at some point in the future.

In closing, I realize this article might read as if I’m hating on P3D.  That couldn’t be further from the truth as for myself and many others like me, P3D served as an important bridge between the days of FSX and MSFS.  But the reality is Microsoft/Asobo really hit the ball out of the park when they developed/released MSFS and through that effort progressed the flight simulation community further than had been done since the very beginning of the franchise.  Regardless of which camp (P3D or XPlane) you favor, MSFS can’t be ignored as to what this platform brings to the flight simulation community and where it stands over two years after its release.