I’ve been seeing Car Mechanic Simulator 2015 being streamed on Twitch for a while.  The game itself was released in May of last year (2015).  I wouldn’t say I wasn’t intrigued by it on first sight, it was just one of those things that didn’t jump right out and say “BUY ME”!!!  But, I did add Car Mechanic Simulator 2015 to my Steam wishlist.  Yesterday, I received an email notification from Steam that an item on my wishlist was on sale.  That item was of course Car Mechanic Simulator 2015.  At 55% off it’s normal $19.99 price the cost was an only $8.99 and I decided to go ahead and add yet another simulation based game to my inventory.  As you can tell, with game titles like Flight Simulator (really P3D), Farming Simulator 2015, Euro Truck Simulator 2 and American Truck Simulator…I’m really a junky for the simulation based games.  Oh…yea…I do occasionally play Grand Theft Auto 5 (GTA5).  I suppose that is a simulator for “how to be a thug”.  But all I really do in GTA5 is drive around Los Santos, steal cars and sell them and occasionally knock off a store.  I don’t blog about GTA5 and I don’t plan to.  By the way, the Steam Sale for Car Mechanic Simulator 2015 is still on.  If you don’t have it yet, consider picking it up now!

My first impressions of the game are positive.  Again, I’m a fan of simulation based games.  It’s really all I play.  However, I will say that sometimes the word “Simulation” is often over used in the gaming industry.  Perhaps it is an unfair comparison, but yea…I do compare each and every simulation based game I play against Flight Sim.  Simply because, Flight Simulation (FSX, P3D, XPlane) is NOT A GAME.  It is a simulation and done very, very well.  Yes, there are adolescent kids (and some adolescent adults) whose primary desire in Flight Sim is to crash their aircraft.  If you apply the “80/20” rule to Flight Sim, you actually have more than 80% who are solid, hard-core aviation enthusiasts and take their involvement in the hobby (yes it is a hobby) very seriously.  However, as much as I am enjoying American Truck Simulator at this time.  ATS (while has some simulation aspects to it) is very much a game when you stack rank it against Flight Sim.

With regards to Car Mechanic Simulator 2015 (CMS2015), yes…it is a simulation based on the car mechanic profession.  I purchased just the base game pack (on sale for $8.99 USD) to start with.  I really didn’t want to get too far off in the weeds with add-on DLC until I could determine if this was something I would fine enjoyable.  For me, (at this time at least) the game has my interest.  I’ve spent almost 3 hours playing the game and during this time I’ve completed 21 jobs .  (see below) 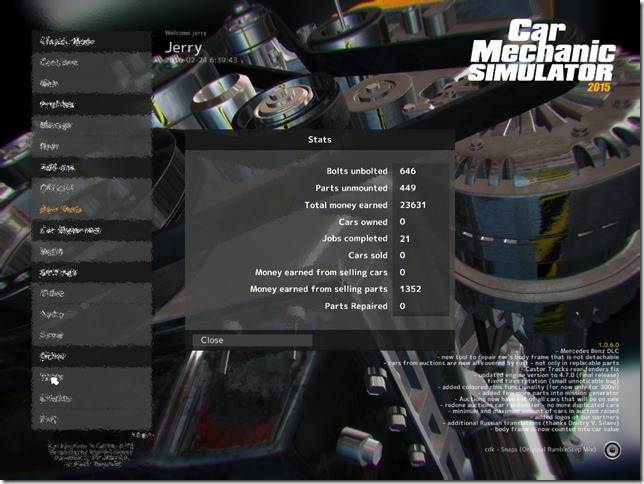 Just because I’ve been flying flight sims for over 30 years, I don’t believe that qualifies me to be a pilot.  However, I’ve learned a lot about aviation and flying the more complex aircraft offered by PMDG, A2A etc. will teach you about the aircraft.  I also believe it would be a stretch to say after spending 100’s of hours playing CMS2015 that one could go open a garage and become a successful mechanic.  But CMS2015 does at the very least give you a high level functional view at how most parts fit together.

The game runs like a champ on my system.  Of course, I just upgrade my GPU to the GTX 980Ti so if it didn’t I would have been disappointed.

What I dislike about Car Mechanic Simulator 2015

The first thing that bothered me about the game was something really rather basic and perhaps petty on my part.   After about a half dozen jobs (mostly brake or suspension related) I had a job offered involving a replacement cylinder block.  This of course required a full engine tear down and re-assembly.  The fact which bothered me was after all that work, a new oil filter was not required to complete the job.  The very same thing happened early today when I had a job to replace an oil pan.  I don’t know about you.  But I would never perform any job on an engine which required draining the oil and re-using the oil filter.  Of course, I realize I could have replaced it anyway…but I believe that would have come out of my profit and not been a cost I could have passed onto the customer.

With regards to replacement parts.  As you go through game play, your obvious and primary role in this game is to repair a car.  In doing so, you have to go over to your computer and look and order parts.  The parts are available immediately after ordering which I think should be changed.  There should be some length of time between when you order parts before they are available.  This would simulate the time it takes for a parts runner to go to the parts store and retrieve the parts.  This would allow a better opportunity to multi-task.  After you strip down all the defective/damaged parts on car 1, you place your order and then start working on car 2.  The length of time can be as short as 5 minutes…but I feel this would better simulate how this process works in the real world.

One other small issue I have is not enough mixture of jobs.  Meaning, while I don’t want every job offered to be a low paying air filter change, I also don’t want every job offered to be a full engine tear down.  But perhaps over time more variety in jobs will be presented.  Finally, why offer so many jobs which aren’t available due to XP rating?  The game appears to offer you four job opportunities at a time.  Two are jobs you can accept and two are jobs you can’t due to not having enough XP.  Why offer those jobs at the early stage of game play?

The in-game music is terrible.  It would have been nice to include a radio option (similar to ETS2 or ATS) where you could play music of your choice through the game.  For me, I turn the in-game music all the way down and play other music outside of the application.

Yes, I realize my actual time spent playing CMS 2015 is only a few hours.  But then again, this is a “First Impressions” blog post.  I will most certainly spend much more time playing this game and may even go ahead and purchase one or more of the DLC expansions.  I think the Pickup and SUV DLC will be my first DLC purchase for this game.  Car Mechanic Simulator 2015 certainly fits into my “Planes, Trains and Automobiles (and Farming Too!)” interests.