Something very cool has recently made its way onto the flight simulation scene and I’m truly excited to have the opportunity to showcase it here for your review.  It’s called A Pilot’s Life.  A Pilot’s Life is a payware software application available from SimMarket which was developed by Simbitworld.  The cost of the software is $19.49 US (15.05 GBP, 16.75 EUR).  The description as stated on SimMarket reads “A Pilot’s Life application has the aim of giving purpose to flight simulation enthusiasts.”  In the short time I’ve had access to it, I can certainly say that it lives up to that claim 100%.

Before I start this product review.  Please allow me to get the fine print out of the way.

I’ve been involved in flight simulation since the early to mid 1980’s.  I’ve talked about how in the early days (before the Internet as we know it) my friends and I would fly our aircraft on our Commodore 64 computers and track our flights on a Big Chief tablet, using a #2 pencil. (Hey it beats slate and chalk)  As the Internet age developed, Virtual Airlines (VA’s) roared onto the scene which (at the time) also “gave purpose” to the hobby.  Over the years I’ve been involved with many great (and some not so great) VA’s and held just about every staff position from Pilot to CEO.  Virtual Airlines are a fantastic way to experience the life of an airline pilot and also meet likeminded individuals who in my case have become dear friends in the process.

I’ve thought a lot about how I would attempt to describe A Pilot’s Life.  While it’s not a virtual airline in the way you may think and it’s also not an airline simulation type program similar to Air Hauler 2.  In very simple terms, it’s a personal virtual aviation career simulation.  But I might be placing the cart ahead of the horse…allow me to first talk about the system requirements, purchase, setup and use of A Pilot’s Life.

Of course you’re going to need a flight simulator.  A Pilot’s Life supports FSX, P3D and X-Plane.  The only add-on that’s required is FSUIPC (FSX/P3D) or XPUIPC (X-Plane) and the free versions of both will work.  Finally, a permanent internet connection is required which is pretty much standard flare when using ACARS type programs.  The only current operating system supported is Windows.

As previously mentioned, the A Pilot’s Life application is available from SimMarket.  The cost as mentioned in the first paragraph is (in my opinion) fair for what you get and for what it offers.  Keep in mind that the price includes both the software and the services behind the scenes that essentially drive the mechanics of the program.

If you’ve purchased add-ons from online retailers before (especially SimMarket) then you already should be familiar with how it all works.  Basically you purchase A Pilot’s Life via SimMarket and after the financial transaction is complete you’ll be able to download the application from your SimMarket account.  The application download is just under 4 MB in size.  Once downloaded, just launch the installer.  During the installation process a shortcut icon will be placed on your desktop.

Once the installation process is completed (don’t blink, because you’ll miss it), just launch A Pilot’s Life via the desktop shortcut.  The application will prompt you to enter the serial key to validate and installation and activation is complete.  A Pilot’s Life will proceed to request a few additional pieces of information so an account can be setup.  This includes you selecting a username, adding your email address and setting up a password.  Remember, A Pilot’s Life is both a software front-end with a supporting web accessed back-end.

Support is available via their homepage or email address simbitworld@gmail.com.  An active Discord Channel is also available which has been setup by the developer.

Hats off to the developer for developing an easy and intuitive setup process for the application.  Being the typical guy who refuses to stop and ask for directions, when I see a software application that I can setup without having to read a manual, I’m a very happy person.  A Pilot’s Life is just such an application.

Really the only initial setup which needs to be done is to tell the A Pilot’s Life application which type of aircraft you desire to use with the system.  For obvious reasons, only tick the boxes for the aircraft you have in your virtual fleet of aircraft.  All the common types of aircraft which are represented in the payware and even some freeware types are available to select.  This includes aircraft such as the Boeing 737, 757, 767, 777, 787 and 747 (including all variants).  In addition, the popular Airbus aircraft including A318, 319, 320, 321 etc. in all variants are also available to select.  Just select the aircraft you desire to fly and that’s about all there is to it. 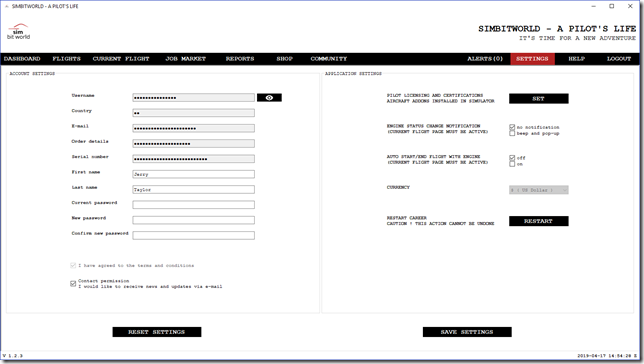 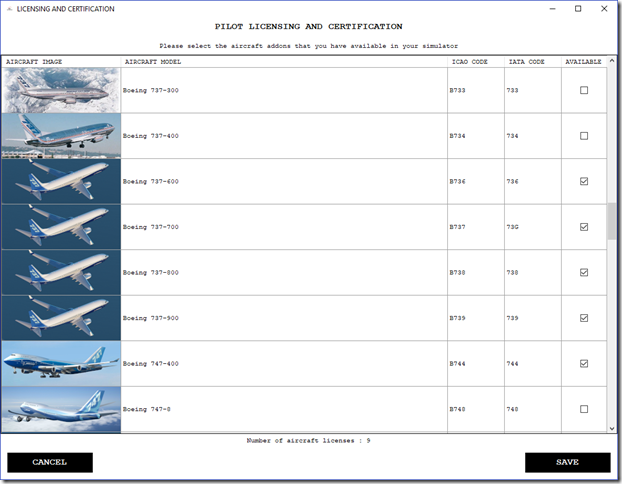 After completing the aircraft selection, click Save and really the setup is all complete.  It’s time to go get a job!

A Pilot’s Life – Your New Career

A Pilot’s Life career system assumes you’ve already completed all your flight training and considers you as a junior first officer.  So there is no requirement to further grind the hours away in a Cessna as you work to get your PPL.  You already have been there, done that and have the t-shirt to prove it.  But you are unemployed and most likely need to start paying off those student loan debts.  Great News!  Employment offers await you.

Unlike your typical virtual airline where you move up the ranks based on flight hours alone, A Pilot’s Life is based on XP or Experience Points.  XP is earned (or lost) based on flight time, pilot rank and landing rate.  The longer the flight the greater the XP earning potential.  In addition, the higher the pilot rank you have, the more XP you’ll earn.  But keep in mind that landing rates will also influence XP gain per flight negatively.  Basically, keep those landing rates under –300 ft/min and your XP modifier will be 100%.  Anything greater than –300 and your modifier percentage drops.  This is all covered in the user manual. 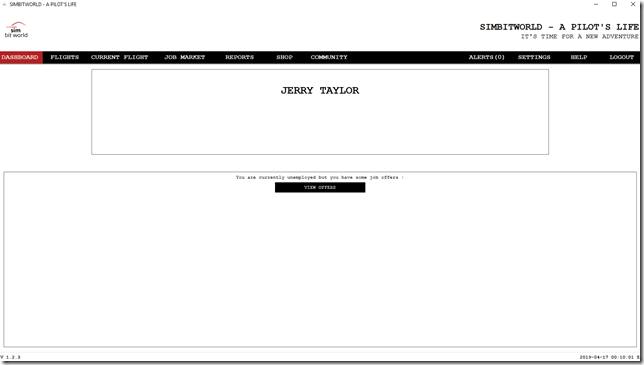 Now here’s where things became slightly confusing for me.  Because I’m the typical guy, I do first and read the manual later.  By the way, the user manual can be found by clicking HELP or via this link.  Anyway, I wanted to start my career with a US based airline.  Ideally that airline would have been American Airlines.  American would give me the complete line of aircraft options I enjoy flying and as I’ve been involved with American VA’s in the past, I’m fairly familiar with their route network.  However, I failed to remember that I’m a junior first officer and not only that, I’m an un-employed junior first officer.  The system considers American Airlines to be a full five star airline and again…I’m just an unemployed junior first officer.  So come on Jerry.  Let’s work our way up.

When you first get started, you’ll always have a few offers available which you can apply for and start your career immediately.  I really wanted to start with an airline where I could fly at least the Boeing 737/738.  I don’t own any descent regional jet payware aircraft and I didn’t want to spend the money and take the time to learn any just to get things started.  So I kept restarting my career (this option is available in Settings) until I had a US based airline which operated the Boeing 737-700 and 737-800.  This US based airline is Sun Country.  I also found a Sun Country livery for both the 700/800 variants via PMDG’s livery manager.

From what I was told on Discord, if you apply for an airline which you haven’t received an existing offer for, these applications are reviewed every Tuesday, Thursday and Sunday.  So the likelihood of a one star pilot being hired by a 4-star or 5-star airline was highly unlikely.  Understandably so! 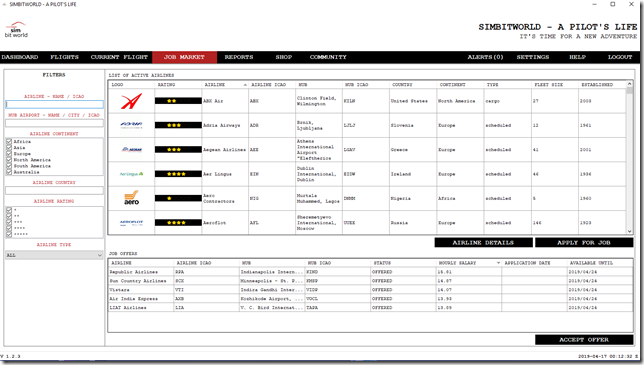 After accepting the offer with Sun Country Airlines, I was presented with a contract of employment (see below).  While there’s really no “fine print”, one very key point to understand is you can’t apply for, nor will you be offered any additional job offers for a period of 7 days. 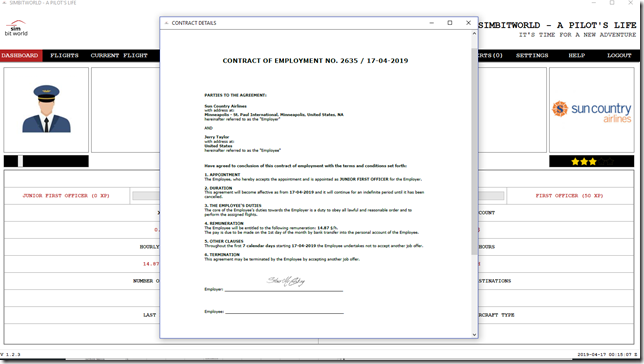 With a signed employment contract in hand, I was eager to get my first flight underway.  As my time is somewhat limited, I selected the option for “short-haul” flights for my schedule.  My first schedule was assigned to me and as I’m based in Minneapolis KMSP the first flight is a flight down to Atlanta and back. 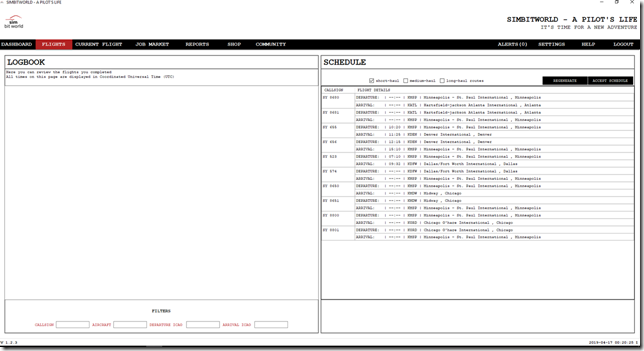 The SimBitWorld – A Pilot’s Life application is basically an ACARS system and tracks all aspects of your flight via the FSUIPC integration.  It works just like any other ACARS system where you’ll need to click a button on the application to start the flight tracking (typically done while at the gate, engines off and parking brake set) and then click a button at the completion of your flight (again typically done once you arrive at the gate, engines have been shut down and parking brake set).

As you can see from the image below, I’ve completed my very first flight with Sun Country airlines.  I operated this flight in the Boeing 738, had a landing rate of –89 ft/min, earned 2.99 XP. 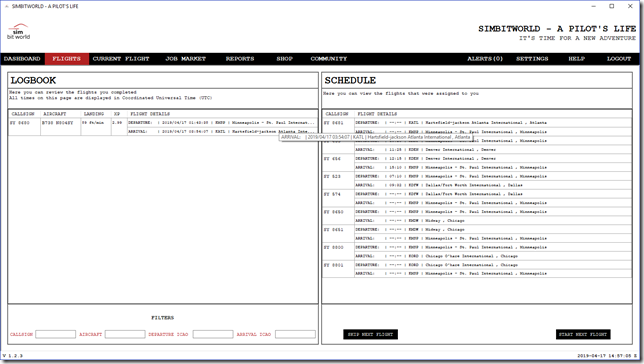 Below is my overall career progress with Sun Country.  Pay checks are issued at the first of each month.  So I may need to survive on pretzels and water…but I think I’ll make it. 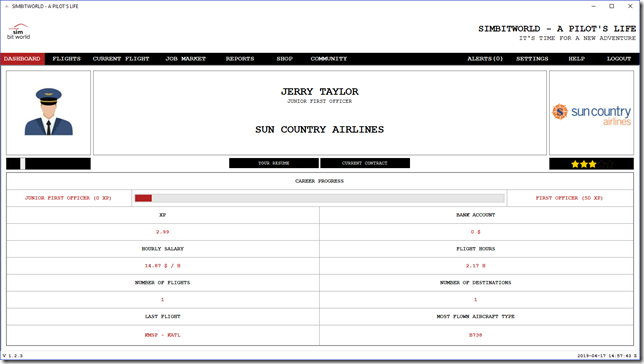 As I arrived into Atlanta a bit late, I’ll layover in a hotel and fly the flight tomorrow back to KMSP.  Then it looks like I’ll be going to Denver and back, then Dallas/Ft. Worth and back and so on and so on.  From what I understand, you can skip next flight only 5 times per month.  As I typically always fly from the last point I landed, it’s unlikely I’ll cancel flights returning back to base.  However, I might skip flights to airports from time to time where I don’t have any add-on scenery.  We’ll see….

As I stated near the top of this writing, A Pilot’s Life is like a virtual aviation career simulation more than it is a virtual airline or complete airline simulation.  While I used Air Hauler 2 for a few months, I neglected it and didn’t make any money as I forgot to keep my hired pilots busy.  SimBitWorld’s – A Pilot’s Life is just about YOU and your career!

As for me and my career?  I’m going to spend the next week flying for Sun Country and see what offers I  receive.  My ultimate goal will be to work hard and get hired at American Airlines.  How long this takes is unclear at this time.  But I’ll certainly update you as I progress.  I suspect I’ll need to just pay my dues and grind it out by either staying at Sun Country (pending I continue to get the type of routes I like) or bounce around based on pay/route opportunities as I continue to progress from JFO, FO and SFO.  Remember, it’s all about the immersion.