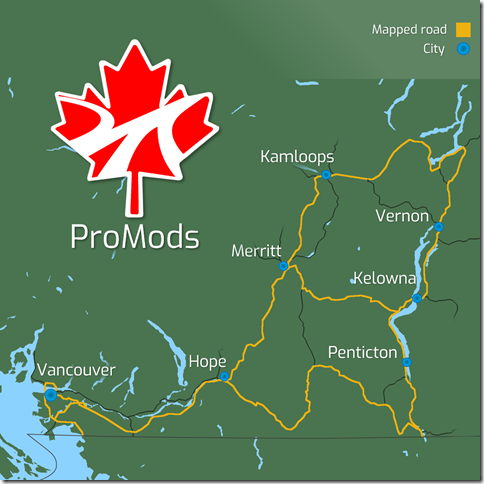 While I can remember the excitement I felt when the US State of Arizona was released (remember it was delayed on initial release of ATS) and I was also excited about New Mexico.  After all, the state of New Mexico is somewhat of a bridge state to both Colorado (where I currently live) and Texas (my birth state).  I knew New Mexico had to come before any chance of getting Colorado or Texas.

With Oregon, my feelings were somewhat neutral.  After all, I had gambled on and lost which US state would appear after New Mexico.  My opinion (at the time) was SCS would perhaps drop Utah in or (and this was a long shot) Texas.  But I was wrong and SCS decided to continue north with Oregon.  And of course now we know the next state DLC to be released will be that of Washington State.

I have a little history with Washington State.  I’ve been there several times and I’ve also spent some time hiking in the area as well.  So while I realize this move north will further delay getting Colorado and Texas released, I think it’s going to be a cool state to drive some trucks in.  Actually, to make another comparison to another simulation game I truly enjoy playing (that being Farming Simulator), some of the screenshots I’ve seen from the Washington DLC really reminds me of FS17’s default map, Goldcrest Valley and of course the awesome version Stevie created Pine Cove Farm.

Which direction will SCS go next?  I think it’s pretty safe to say it won’t be north.  After all, this is American Truck Simulator and not North American Truck Simulator.  So SCS will turn and go one of two directions.  Either they’ll proceed directly east and drop Idaho in which could pave the way for Utah to come next.  Or we could see them skipping Idaho (for now) and going with Utah or Texas.

From my limited knowledge of the type of trucking that goes on in the state of Idaho, I feel Idaho will be very similar to what we already have represented in Oregon and Washington.  While Texas will obviously be a big project, once Texas is added it will give us miles and miles of trucking opportunities with I-40 and I-10 stretching all the way from California through Arizona, New Mexico and all the way to the eastern Texas border.

But alternatively, SCS should give serious consideration to bring Utah and Colorado into play as soon as possible.  Especially if they truly work hard and make I-70 as challenging as it can be in real life as it winds and climbs its way through the Colorado Rocky Mountains.

But of course we’ll just have to wait and see….