Is the virtual airline concept dead in modern times?

A question I’ve been pondering recently, Is the virtual airline concept dead in modern times?  Back in the very late 1990’s and early 2000’s, VA’s or virtual airlines were all the rage.  They continued to be a very popular addition to the virtual aviation hobby.  Over the years, I’ve been a part of many different VA’s, served in various capacities from just a regular pilot, hub manager, executive management and even started my own fictional virtual airline a few years ago.

In the very early days of the virtual airline concept, the websites/communities were often (by today’s standards) crude, low-tech representations attempting to replicate their real world airline counterpart.  The online presence generally consisted of a basic website (often built using free hosting, complete with pop-up ads) with a few pages to include a main/welcome page, pilot rosters, management structure, rules/SOP and often a forum.  With time, more advanced websites were created complete with automated PIREP logging and tracking features.   These automated features soon became the norm for most sites.

Unfortunately, VA’s which mirror the operations of a real world airline (American, Southwest, Fedex, British Airways etc.) struggled long ago and still do to avoid getting into legal troubles with their real world counterparts.  I’ve seen VA’s pop-up with a complete website, begin hiring pilots and management then close their doors after receiving a cease and desist letter from an attorney representing the real world airline.  Even with disclaimers posted about this website is not affiliated with the real world airline, the letters kept coming and the VA’s kept closing.  The primary issue here is the misuse of copyright and intellectual property which belong to the real world airline.  I certainly can understand why this was done.  Some of these sites were extremely crude in nature, but some, while having a professional appearance could actually become confusing to some who were seeking out the real world airline website.  Bottom line, while the “freedom of speech” protects us in many ways…it doesn’t give us any rights to use property (including logos etc.) which belong to others any way we please.

Please and Thank You

Some VA’s actually managed to ask for and gain permission from their real world counterpart.  One example is British Airways Virtual (BAVirtual).  They were perhaps one of the first to actually accomplish this and to this day are one of the premier virtual airlines on the interwebz.  For BAv, it all started back in the year 2000.  While virtual airlines were popping up everywhere, many were based on fictional airlines and only a few actually existed in the UK.  The folks behind BAv wanted to change this, so they set out to create not only a professional looking and fully functional website…but also gain the permission and cooperation of their real world counterpart, the real British Airways.  As I’ve often stated, I’ve been a part of this hobby for a very long time.  I was around it before the internet and I was around when BAv came onto the scene.  I actually was serving as the VP of Operations for American virtual Airlines (the oldest VA on the VATSIM network) and remember speaking to the management of BAv as we established codeshare agreements between AvA and BAv to replicate the OneWorld Alliance.  It was great times back then and there are plenty of times that I miss flying for and being a part of AvA.

A number of years ago, I was perusing YouTube seeking out flight sim content and stumbled onto a YouTube content creator by the name of Matt Davies.  Matt was running a very successful YouTube channel (also has a very successful Twitch channel) and I found his presentation style very enjoyable.  Not to mention, he actually knows what he’s talking about.  Matt has created content and selflessly shared his knowledge over the years and while there’s no way of knowing exactly how many new people he’s attracted into this hobby, his commitment to this hobby is truly second to none.  As time passed, I watched more and more of his recorded content on YouTube and his livestreams on Twitch, I learned he (and a few others) were developing a new virtual aviation environment called ProjectFly.

What exactly is ProjectFly?  Well…I’m going to just quote some info directly from their website.  “In simple terms it is a versatile platform allowing you to give or take as much from your hobby as you would like.  Whether you simply wish to fly from point A to point B in your Cessna without any realistic procedures, follow the path of a real pilot through their training and type rating ready to simulate that daily routine of a low cost captain or even if you simply want a community of like-minded individuals”

For all the reasons in the above quoted and italicized comment above and a lot more.  If asked what my number one favorite real world airline is, my answer without hesitation is American Airlines.  But I also enjoy flying and replicating the flights of many other airlines such as Southwest, Frontier, Fedex, British Airways and the list goes on and on and on.  But most VA’s really want their pilots only flying real world routes which they have setup in their systems and rightfully so.  Also, I just simply don’t have the time to ensure I can keep up with the minimum number of flights when belonging to multiple virtual airlines.

ProjectFly allows me to fly for any airline I desire and there are no minimum commitments.  I can fly every day for a month and I can skip a few months without any flights and no one is going to harass me to get my flights in.  I can also fly any aircraft type I choose, regardless of the number of hours I have logged.  The talented developers behind ProjectFly have developed an exceptional software client that is easy to install, configure and seamlessly just does what it’s suppose to.  From that client I can setup new flights, add new aircraft, view my flight log and it tracks and logs my flights effortlessly.  ProjectFly has also developed a “Passport” feature which tracks/stamps the countries you’ve landed in.  The passport displays the nations flag once you successfully land and calculates the percentage of countries you’ve visited.  In addition to the passport feature, all your flights are tracked on a map which is visible on the client documenting all the routes you’ve flown.  As you can see from the image below, I’ve logged just under 100 flights in the ProjectFly system and have visited just 9% of the countries in the world.  I better get busy huh? 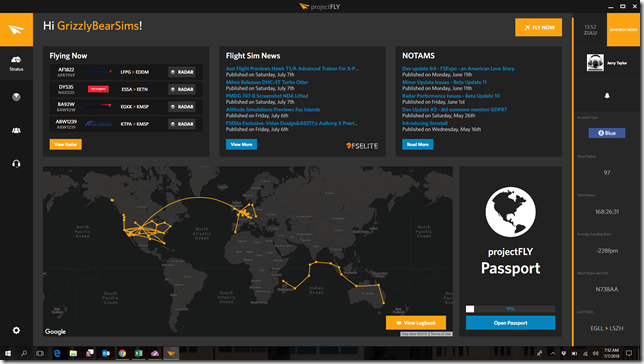 A snapshot of my passport showing the nations of Australia, Austria and Belgium as visited. 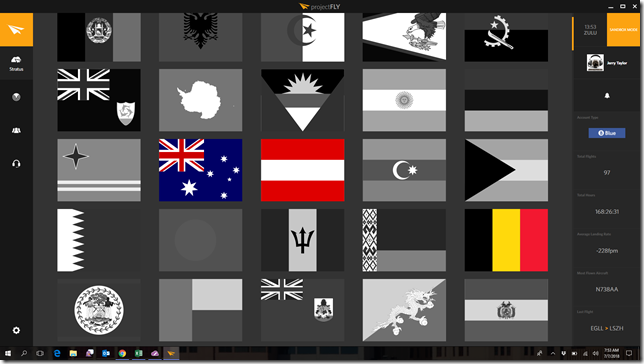 ProjectFly also offers various achievements (similar to Steam achievements) to work towards.  As you can see I’ve earned several including my first flight, long-haul, Challenging Approach Gibraltar and a few others. 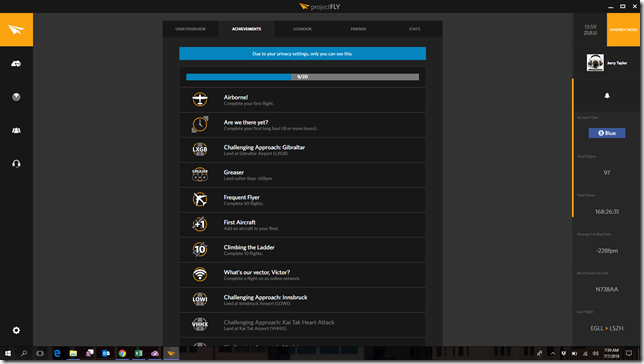 I’ve only listed a few of the features available with ProjectFly and there’s a ton more in development.  You can learn all about ProjectFly by visiting the ProjectFly website.

Is the virtual airline concept dead in modern times?  Absolutely NOT!  Virtual Airlines are thriving in this day and age.  However, they all suffer from the issues I’ve previously pointed out and if you’re a busy person like I am, you might just not have the time to commit to their rules and policy’s.  Again, ProjectFly is a very relaxed and laid back environment where you can pretty much do whatever you wish.  Some may argue that ProjectFly lacks the social aspects of a traditional airline.  However, the ProjectFly team have setup both a forum and a discord channel, so my advice is jump right in, introduce yourself and get busy flying.

As always, thanks for taking the time to read my content.  If you have a question regarding flight sim or needs some help, I’m always willing to lend a hand.  The best method of contacting me is to join my Discord channel.  You can post a message in the chat channel or private message me and I’ll do my best to help you any way possible.