The highly anticipated GSX Pro by FSDreamTeam has finally been released for Microsoft Flight Simulator 2020 (MSFS) and boy, oh boy….has it made an impact in the flight simulation community.  If you are new to the flight simulation world and have not had the opportunity to use GSX in either FSX or P3D, the you might be wondering what it is, what it does and whether or not you need it in your sim.  I’ll answer these questions and also for those who are already familiar with the product, will discuss why I believe you still need this in MSFS.

Before I start this product review.  Please allow me to get the fine print out of the way.

What Is GSX Pro? 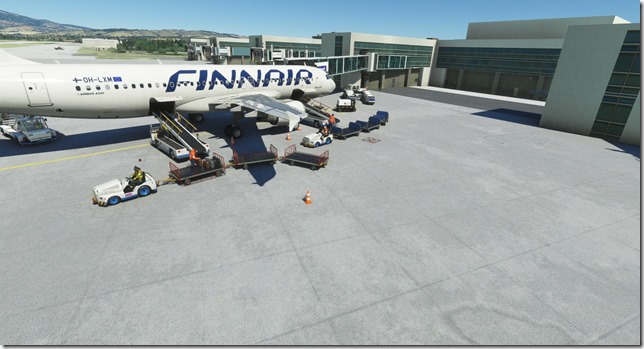 I’ve been a fan of GSX for many years and since making the full switch to Microsoft Flight Simulator a few months ago, had truly been missing this add-on.  For me, GSX ticks all the boxes and provides my flight simulation experience all the immersion necessary to simulate the role of a commercial airline pilot.

The new version, GSX Pro debuted for MSFS just a few weeks ago and unfortunately the release was troubled by several unfortunate issues which were not entirely the fault of FSDreamTeam.  On the day of release, many users began experiencing poor performance and frequent CTD’s (crash to desktop).  Naturally, when something goes wrong with the sim we can’t help but look at the last thing we tweaked or installed as being the culprit.  This is only natural and I initially jumped to the conclusion that something had seriously gone wrong with the install or there was something seriously wrong with GSX Pro.  However, after some time it became clear that these issues with MSFS were happening to users who had not purchased/installed GSX Pro.  The issues causing the CTD’s and slow performance of MSFS (which to this day are still not completely known) were resolved by Microsoft/Asobo and once again MSFS performed as it should.

As previously stated, GSX Pro provides an all-in-one ground services function for MSFS.  This of course includes catering, refueling, baggage and passenger boarding and de-boarding, refueling and push-back services.  For the most part it performs all these functions well.  Yes, there are some small quirks which happen from time to time.  While some of these minor annoyances could be caused by MSFS, some of these have been around in the product from the FSX/P3D days.  In my opinion, when I see the baggage carts driving through the engine or through another vehicle, I just chuckle and appreciate the fact I’m alive and able to enjoy this hobby as much as I do.  Remember, AI will never be perfect.  We see these same issues in other simulation based titles and it’s in your best interest to just grin and bear it just as I do.

All-in-all, GSX Pro is an add-on I rate highly in the “must have” category of flight simulation add-ons.   As I previously said, I had truly been missing GSX Pro after making the switch from P3D to MSFS a few months ago.  As I write this, GSX Pro has been available for about 3 weeks and the level of improvements, bug fixes etc. have brought it up to the standard in which it was for P3D and it will continue to improved over time.

Do you absolutely need GSX Pro?  If you want to add that extra level of immersion to your flight simulation experience then the answer is an overwhelming YES!

As always, thank you for reading.

In just a few days, 18 August 2022, Microsoft will celebrate the two year anniversary since the release of Microsoft Flight Simulator.  During the summer of 2019 and somewhat out of the blue, Microsoft announced they were working on the new version of their extremely popular Microsoft Flight Simulator.  I use the words “Out of the Blue” because most in the flight sim community were not aware of this news and it came to us with excitement and even some speculation.  Many of the blog postings I wrote here on my blog were very much mixed with my own personal excitement but also with guarded concerns.  After all, Microsoft had abandoned Flight Simulator and as a result many of the long-time fans of the sim had moved over to Prepar3D or X-Plane.  For the most part, I was certainly happy with the direction Prepar3D was moving in and was having a lot of fun in the sim.

As we approach the two year anniversary of the release of the new Microsoft Flight Simulator (MSFS) I can happily say that much of the concern or speculation I once held towards the title have been dismissed.  After all, earlier this summer when the Fenix A320 and PMDG 737-700 released for MSFS, I began flying MSFS almost exclusively.  I still occasionally fly P3D when I have a need to fly the PMDG 777 or the QualityWings 787.  But I would say this is perhaps only 1 out of 100 or so flights that I do this.  I’ve thoroughly enjoyed the time I spend in MSFS and the experience gets better and better.  As a matter of fact, I changed my mind on the decision not to purchase the PMDG 737-700 (I initially said I would hold out until the 737-800 released) as the few times I tried flying the 737-800 in P3D, I just didn’t enjoy the experience.  While MSFS may have some limitations, the overall beauty of the sim makes up it.  Plus the addition of the Fenix A320 and the PMDG 737-700 (and soon to be released 737-800) have been instrumental in keeping me flying MSFS and essentially letting P3D gather dust.

The concerns and speculation many of us long-time flight simulation enthusiasts once had for Microsoft and Microsoft Flight Simulator have (in my opinion) to be null and void at this point.  In all honesty, while it did take me about a year and a half to fully embrace MSFS for my jetliner use, I was convinced that the efforts of both Microsoft and Asobo would truly turn MSFS into the future of flight simulation we have been longing for.  It just took some time for some of the more advanced airliners to make it into the sim and of course it took some time for Microsoft to work out a few bugs.  But as I’ve mentioned a few times, I’ve been enjoying the hobby of flight simulation since the early 1980’s.  The advancement of flight simulation over these past 35+ years is truly amazing.  The dedication I see from Microsoft, Asobo and all the many 3rd party developers certainly have me convinced that Microsoft Flight Simulator earns the right to say “As Real As It Gets” and will only continue to get better as time goes by.

While August is about half way done, I believe we’ll see some amazing things happen this month.  First and foremost, Microsoft/Asobo have been working hard on the sim update 10 release.  While I haven’t participated in the beta, I’ve heard from many simmers who say that SU10 addresses many of the bugs we’ve been plagued with and moves the sim one step further ahead with better performance and features which many 3rd party developers can take advantage of.  While I’m not a fan of Microsoft’s “Must Update Features”, I am anxiously awaiting SU10 and hope the update/upgrade process works as smoothly as all the previous updates have.

Finally, I also believe we will soon have FSDreamTeam’s GSX available to us during the month of August.  For those that don’t know, GSX is the ground services component to flight simulation.  GSX controls all aspects of cargo and passenger loading, including the visuals for baggage/cargo being loaded onto the aircraft along with fueling, catering and that much important de-icing during the winter months.  In addition, GSX also does a really good job with aircraft pushback services which are truly lacking in MSFS at the present time.

I believe we’ll continue to see some truly amazing things come to MSFS in the later half of 2022 and early 2023.  I’m hopeful SU10 paves the way for Chaseplane to finally come to MSFS and of course we might….just maybe see the PMDG 777 before end of year or perhaps very early 2023. Time will certainly tell.  It’s certainly a great time to be alive and a great time to be a flight simulation enthusiast.

As always, thank you for taking the time to read and I look forward to returning with a blog post in a few weeks to document my experiences with SU10, PMDG 737-800 and hopefully GSX.